Posted by nyredcross at 12:26 PM No comments:

Email ThisBlogThis!Share to TwitterShare to FacebookShare to Pinterest
Labels: Down the Street, Far Rockaways, Hurricane Sandy

Posted by nyredcross at 11:46 AM No comments:

Email ThisBlogThis!Share to TwitterShare to FacebookShare to Pinterest
Labels: Down the Street, Far Rockaways, Hurricane Sandy

You guys have helped me in the most tremendous way

Rafee Greig returned home from a long day at work one weekday night and received a tremendous shock: A brutal fire had swept through his Brooklyn apartment building earlier that day. As a result, his first floor apartment was destroyed.

Greig, a summer camp director in the NYC public schools, called his boss, who came over with a colleague and helped him salvage what possessions they could. Greig stayed with friends, and a few days later, was alerted by a social worker to call the Red Cross.

At Greater New York headquarters in Manhattan, a Red Cross caseworker helped Greig through the steps he needed to take to begin rebuilding his life. She also provided him with a debit card so that he could replace basic necessities.

“My experience here has been very helpful,” he said. “Since Monday, every night I went to sleep I’ve cried throughout the night … today is the first day it was tears of joy. You guys have helped me in the most tremendous way.”
Posted by nyredcross at 3:58 PM No comments:

Deonca Dawkins’ first indication that something was wrong in her fourth floor Brooklyn apartment was when her bathroom light wouldn’t turn on. It was a weekday morning. She checked her kitchen and living room lights—they were out, too. She thought she smelled “someone baking.”

Moments later, Deonca heard firefighters pounding up the stairs. She opened her front door and saw smoke pouring out of the hallway light, as well as on the stairs leading to the roof. A firefighter raced into her apartment.

“He jumps on my bed and starts hacking down the room; all of a sudden you see this black smoke coming out,” Deonca said.

Deonca, a hairdresser who had lived in the apartment for nine years, grabbed her son, Desean, eight, and ran out and across the street. All they had with them were their phones and Desean’s ninja turtle toy.

“The smoke got blacker; across the street, you could smell it coming out. It’s starting to spread in the other apartments. Panic is setting in; we’re standing there, holding our heads,” she said.

Then, the Red Cross arrived.

“They had snacks and water, crackers, cookies,” Deonca said. “I was still in shock, but I’m glad the Red Cross was there, they made us feel more hopeful.”

Red Cross put the mother and son up in a hotel for two nights, and gave them MetroCards and a debit card with which to purchase food. Since the apartment was destroyed, they also gave Deonca information about the steps she needed to take to find long-term housing.

“Red Cross was excellent, fantastic, awesome,” Deonca said. “They were there in the time of need.”
Posted by nyredcross at 3:16 PM No comments:

Email ThisBlogThis!Share to TwitterShare to FacebookShare to Pinterest
Labels: Brooklyn, Down the Street, Fire 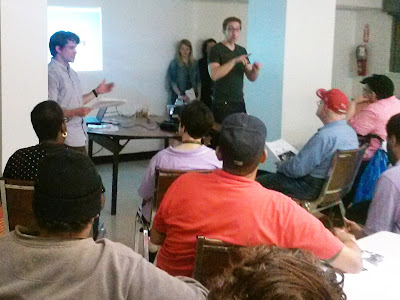 More than 50 residents and staff of the Tanya Towers Treatment Apartments on Manhattan’s Lower East Side attended a “Be Red Cross Ready” emergency preparedness presentation by Damian Morales, American Red Cross community recovery specialist. This deaf-friendly residential setting is part of the New York Society for the Deaf.

Through an interpreter, the group, including deaf and/or hearing-impaired residents, learned how to get a kit, make a plan, and be informed before an emergency or disaster occurs.

"Having been impacted by Superstorm Sandy, they were active in discussions to learn how to prepare for the unexpected,” Morales said. “Their location now falls in Zone 1 of the NYC Hurricane Evacuation map so preparedness takes on a new meaning to the group."

The Red Cross offers emergency preparedness presentations free of charge as a service to the community. If you belong to a group or community interested in “Be Red Cross Ready,” please contact Suzan Rosen at suzan.rosen@redcross.org.
Posted by nyredcross at 3:04 PM No comments:

Email ThisBlogThis!Share to TwitterShare to FacebookShare to Pinterest
Labels: Be Red Cross Ready, Down the Street, Manhattan, Preparedness

@RedCrossNY Auto Updates - the Stories Behind the Tweets

People who follow the Greater New York Red Cross on Twitter are familiar with our “Red Cross auto updates” that appear on our feed anywhere between five and 20 times a day. When our region concludes a disaster response, an email is automatically generated with basic information about that incident and sent directly to Twitter.

What is not always evident from these posts, though, is that behind each tweet is an individual, a family, or a group of families who have had their lives turned upside down by disaster. That’s where the Red Cross comes in, to help them start to get their lives back on track. Here are two of those stories:

José Rodriguez has shared a seventh floor apartment in Manhattan with his mother for the past five years. On July 22, he and his mom were visiting his brother in the Bronx. They returned home around 11 pm to find six fire trucks in front of the building.

The damage to the apartment was so extensive the family could no longer live there. On scene, two Red Cross disaster responders reached out to José.

They told him the Red Cross could help with housing if he and his mom had nowhere to stay.

"It doesn't get better than that,” José said. “They gave us two nights in a hotel, money and hygiene kits."

José and his mom spoke with a Red Cross caseworker at regional headquarters in Manhattan in the days after the fire; he said she was also very helpful.

"Without the Red Cross, we would be living on the street,” José said. “We have no place to stay …. We lost everything.”

José’s mother, who speaks only Spanish, leaned over and said something to him. José translated her words: "Thank God the Red Cross is here to help us."

Maurice Porter and his family of six—his wife, three sons and a daughter-in-law— have lived in a two-story house in the Clifton section of Staten Island for the past eight months. The morning of July 17, after walking his wife to the train station, Maurice came home to find his house ablaze and firefighters working to extinguish the flames.

Ultimately, nothing from the house was salvageable. Maurice, whose family had suffered a tragedy months earlier, losing a son to a shooting incident, felt overwhelmed. “I saw flames and I thought: How am I going to take care of my family? I thought we were going to sleep on the street.”

A Red Cross disaster responder was already on the scene. He spoke to Maurice and his son James, who had rushed home after a call from his dad. The responder assured them that the family would have a safe place to sleep; the Red Cross would see to their needs. ﻿

The Red Cross placed the Porters in a local hotel, provided them with emergency funds for food and clothing, and arranged for the family to meet with a caseworker the next day at the Greater New York office in Manhattan.

The caseworker helped the family work out a plan for life after the fire, walking them through the necessary steps to secure more permanent housing.

“Put it like this ... on a scale of one to ten, the Red Cross was a twenty-five,” Maurice said. “The Red Cross provided everything to make sure we were secure and we could stay together as a family.”

This experience has led Maurice consider volunteering with the Red Cross. He hopes to help other people, in the same way the Red Cross provided assistance to his family.
Posted by nyredcross at 12:26 PM No comments:

Red Cross and Partners teach kids to swim in the Bronx

Posted by nyredcross at 4:24 PM No comments:

Email ThisBlogThis!Share to TwitterShare to FacebookShare to Pinterest
Labels: Down the Street, Learn to Swim

"You can be the best thing to happen to somebody on their worst day."

July 31st was the final day for three of four American Red Cross relief and recovery volunteers—Jack Porter, Doree Trent, and Julia Kim—who were bringing help and hope to Sandy-affected residents in New York. A fourth worker, Giselle Cuen, is staying on until the end of August.

Here are their stories.

Giselle Cuen of San Diego, Calif., volunteered to provide disaster health services in a Red Cross shelter for two weeks in November. Cuen returned to New York City in February to work in case management, helping people affected by Sandy; she will stay until the end of August. “Being able to help people is great,” Cuen said. “It feels really good.”

Jack Porter of Dothan, La., arrived in November to begin a month of on-the-ground relief work, helping feed people affected by Sandy. His shift completed, Porter flew home to Louisiana. Mere days later, he returned to New York to begin volunteering again, primarily helping people affected by Sandy learn how to access Red Cross assistance and how to proceed on their road to recovery. “You can be the best thing to happen to somebody on their worst day,” Porter said. “I do this because I love it.”

Doree Trent of Tulsa, Okla., spent seven and a half months helping people affected by Sandy. She arrived just days after Sandy made landfall and began overseeing all Red Cross shelters in New York State. She returned home to Oklahoma in mid-January, but returned to New York in March to help manage cases of people affected by Sandy. “Being retired military, I’m very patriotic and I believe in serving my country," Trent said. "In the military I was stationed overseas and my mother passed away. The Red Cross paid for my flight back to the mainland. They helped me out a lot.”

Julia Kim of Lathrop, Calif., arrived in New York City in early November and has spent nine continuous months working in Sandy case management, helping connect people with Red Cross resources and assistance. “Getting to know some of the families, I wanted to see [their stories] from beginning to end and have some closure,” Kim said.
Posted by nyredcross at 10:03 AM 1 comment:

Email ThisBlogThis!Share to TwitterShare to FacebookShare to Pinterest
Labels: Across the Country, Down the Street, Hurricane Sandy
Newer Posts Older Posts Home
Subscribe to: Posts (Atom)