Over the last 7 days, the Greater New York Red Cross provided emergency assistance to 109 adults and 39 children following 51 local disasters. Here are some highlights from last week and a preview of upcoming activities (see below).

Posted by nyredcross at 3:36 PM No comments: 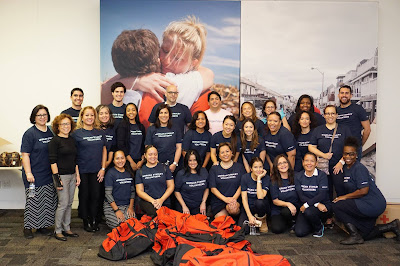 Employees of Morgan Stanley helping to build comfort kits for those affected by the recent Hurricanes.

Over the last 7 days, the Greater New York Red Cross provided emergency assistance to 157 adults and 51 children following 49 local disasters. Here are some highlights from last week and a preview of upcoming activities (see below).

Posted by Unknown at 4:58 PM No comments:

Over the last 7 days, the Greater New York Red Cross provided emergency assistance to 147 adults and 48 children following 45 local disasters. Here are some highlights from last week and a preview of upcoming activities (see below).

Posted by nyredcross at 3:37 PM No comments:

Among the outstanding staff members in the Greater New York Chapter of the American Red Cross is Mauricio Serrato, Disaster Program Manager for Brooklyn. Mauricio is a Marine veteran, who grew up in Queens, New York, and served for one year in Japan before returning to Camp Lejeune, North Carolina. There he honed his leadership skills by training Marine recruits.

Mauricio joined the American Red Cross in 2004. Initially, he worked in the facilities department. Through training and hard work, Mauricio soon became a volunteer responder, going out to help local families after disasters. He was hired as a Full-Time Responder and then as Disaster Manager.

After Superstorm Sandy, worked tirelessly to help his neighbors across New York City, with a focus on his home borough of Queens. After a two-year break, he again joined the Red Cross as a Program Manager and developed the operations plans for our Home Fire Program, which has installed over 60,000 smoke detectors across the region since 2014.

This past Fall, Mauricio deployed for 45 days to support the response to Hurricane Irma in Puerto Rico and St. Thomas. Initially, he worked with the Puerto Rico Chapter of the Red Cross to provide comfort kits and food packages to more than 2500 evacuees whose homes had been obliterated by the hurricane. Mauricio then traveled between St. Thomas and Orlando, Fla., where he worked with volunteers from Wells Fargo to organize the planning and distribution of emergency supplies for residents on the US Virgin Island, including St. Thomas.

Mauricio is proud that he could lead teams of Red Cross staff and volunteers to distribute more than 10,000 Clean-Up Kits, 180,000 pounds of rice and beans, 30,000 FEMA Food Boxes and 5000 cases of water to residents in need.

Asked what he finds most satisfying in his work, Mauricio said: “My experience as a veteran and my work at the Red Cross have given me the ability to reach out and help those in time of need. There is no greater satisfaction than that!”

Thank you, Mauricio, for your service! The Red Cross is very proud to have you on its team!
Posted by nyredcross at 3:17 PM No comments:

Over the last 7 days, the Greater New York Red Cross provided emergency assistance to 160 adults and 43 children following 53 local disasters. Here are some highlights from last week and a preview of upcoming activities (see below).

Posted by nyredcross at 11:33 AM No comments:

Notes From the Field

Greater New York Red Crossers continue to deploy across the US to support residents who are working through what is expected to be a long road to recovery from record-breaking destruction over the past few months. Overall, the Red Cross has provided shelter, meals, and supplies to more people in the last 60 days than in the previous five calendar years combined. Just last week, a major Nor'ester can be added to the list of large-scale emergencies that our Greater NY teams have deployed to. Here's a look back at the work of our volunteers and employees on the ground as told from their own social media accounts.

November 2nd, Daniel Delgado, Hurricane Maria, Puerto Rico
Instead of getting some well-deserved rest, Daniel chose to use his day off from volunteering to continue his service to the people of Puerto Rico

November 1st, Nor'ester, Maine
Earlier this week, a major coastal storm pushed through the northeast blowing high winds through Vermont, New Hampshire, Maine, and Connecticut. The high winds in some places topped 90 mph and knocked down power lines and trees that crashed into cars and caused structural damage to homes. It's estimated that 1 million people in the region were left without power. This past week four Red Crossers from Greater New York were deployed to Maine to assist with running shelters that were operating as emergency warming centers. The shelters provided hot meals and showers, phone charging, and other services to residents left without power.


October 31st, Cedric Davoren, Hurricane Harvey, Houston
After a disaster strikes there's usually a long road to recovery, including the effort to clean up. Cedric talks about his experiences supporting and collaborating with local and Federal authorities.

October 29th, Gary Chin, Hurricane Maria, Puerto Rico
Gary has been in Puerto Rico since October 16th. Below he's showing the logistical side of what the Red Cross does.

Steven went to Puerto Rico to work bulk distribution delivering life-saving supplies to thousands of residents left with no clean water or electricity. Before going to Puerto Rico, Steven deployed to Texas and supported residents there.

October 17th--Volunteers, Welcoming Families Displaced from Puerto Rico
Volunteers and staff of the greater New York Red Cross met evacuees displaced from Hurricane Maria that hit Puerto Rico. From October 11th through the 18th families were welcomed at John F. Kennedy International Airport and offered assistance. To further support those affected, the Red Cross of greater New York has partnered with city agencies to set up a service center on Manhattan's upper east side to address the long-term recovery plans of affected residents.

Thx to our volunteers who have been supporting families at JFK returning from Puerto Rico. #HurricaneMaria pic.twitter.com/uPZqq6pA57


September 20th--Alex Ong, Hurricane Irma
Alex first deployed when Hurricane Irma struck. He drove an emergency response vehicle (ERV) to Florida and executed mobile feeding operations. Later he went to Puerto Rico to carry out bulk distribution efforts. At the end of his 2-week tour he was at the volunteer outtake center preparing to come home when he saw dozens of families standing in line waiting to register for shelter. Alex decided to extend his deployment for another week so he could help those families in their time of need.


August 30th--Joe Spaccarelli, Hurricane Harvey
Staff member Joe Speccarelli from Long Island coordinated the deployment of our emergency disaster vehicles (ERVs) from Louisiana to Texas. These large vehicles carry emergency supplies to affected areas. Before the storm hit the Red Cross coordinated around 200 ERVs in the region that drove out to people in need of food and water. Here is a picture of ERV teams getting a briefing and training before they head out.

August 29th--Elizabeth Barker, Hurricane Harvey
Elizabeth Barker of Long Island relayed critical information about where people could find shelter and communicated how the Red Cross is assisting residents. She was also out in the field at a shelter in Dallas connecting with other organizations involved with the response and recovery effort.

Thanks @FOX4 for having me this morning and talking about how to best support Harvey relief #RedCross #Harvey pic.twitter.com/lZipf1ZGo8
— Elizabeth Barker (@LizBarkerNY) August 29, 2017

Made some new friends from Heroic Inner Kids at the shelter in Dallas tonight pic.twitter.com/fxuAyzDWXK

Here is a view of them as they head out. http://abc7ny.com/teams-from-ny-head-to-texas-to-help-harvey-recovery-effort/2347217/


August 26th--Matt Teter, Hurricane Harvey
Matt Teter of Manhattan spent several weeks in Texas and surrounding regions to report on events as they were unfolding.

Posted by nyredcross at 1:55 PM No comments:

In an effort led by New York City, the American Red Cross in Greater New York has partnered with City agencies and community organizations at a Service Center in the East Harlem to assist with the short and long-term needs of hurricane-affected families arriving in NYC.

The Red Cross has been present at the Center (1680 Lexington Ave) since it first opened on October 19, 2017. Here are some of the dedicated volunteers who have been working tirelessly to help. 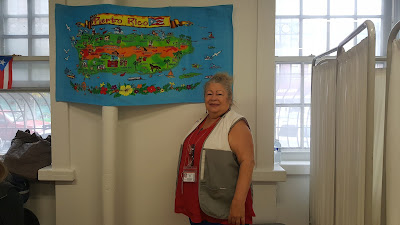 Betsy Tirado, a nurse, has been volunteering with the American Red Cross for about twenty years. She has been at the service center providing medical support for evacuees with the assistance of her organization, the National Association of Hispanic Nurses (NAHN).

"I’ve been volunteering for about 20 years. I was heavily involved in 9/11, then I stopped for family and my personal job. Then again, I went back. Whenever I have the free time and am able to help out, I’m out there!" Betsy said.

"I also belong to NAHN. I recruited the NAHN members to come [here]… I recruited them to help and be here. Many of our clients speak English, but many do not and they are very stressed, they just went through an incredible event. They don’t have a place to stay, everything is up in the air. What they knew as normal yesterday is not necessarily normal today. They’re in a place that is outside of their comfort zone. Their language and needs are different and they have great needs. We need to be out there and help them out." 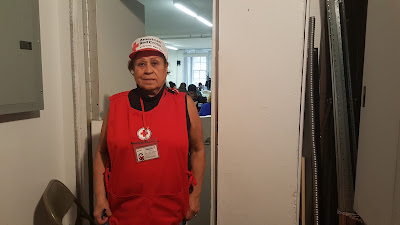 "I do a lot of things. Client services, mass care, response. I also help install fire alarms and do data entry at the office. We hand out comfort kits, food, baby food. Speaking Spanish helps."

When asked about why she volunteers for the the Red Cross, Sara responded, "Because I feel it, people need help, I feel it in my heart." 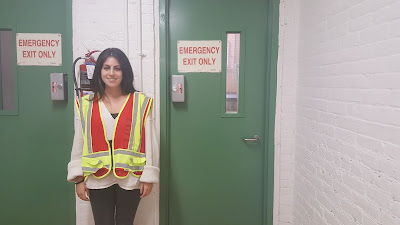 Theresa, a resident of Long Island City, has been volunteering for the American Red Cross for a little over a month. This was her fist day volunteering at the Service Center.

“I’ve always wanted to join the Red Cross," she said. "With the hurricanes and everything going on I wanted to be involved and do something instead of just talking about it.” 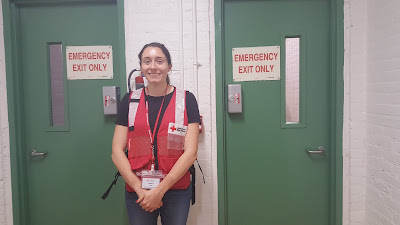 Jennifer Nerby, an NYC native, has been volunteering for the American Red Cross for about six months. This was also her first day volunteering at the Service Center.

"I find it really rewarding. It’s a great way to [help] people in the community. The Red Cross is really cool, I like the services they provide. Most people really need what's being provided to them." 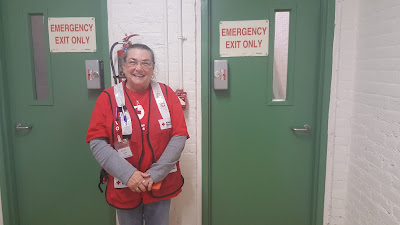 Wanda Sutter has been volunteering for the American Red Cross in Greater New York for six months and this was her first day at the Service Center. She comes to us all the way from Illinois.

"I wanted to come to New York and experience New York as a New Yorker and I wanted to do service work while I’m here, so I connected with the Red Cross which was a perfect fit for me," Wanda said. "I just enjoy helping people. I wanted to go on deployments and help during disasters. There’s not always an opportunity for deployment and so I got involved doing other things. There’s just so many things to do at the Red Cross and I’ve been busy for the months that I’ve been here."
Posted by nyredcross at 4:06 PM 1 comment: