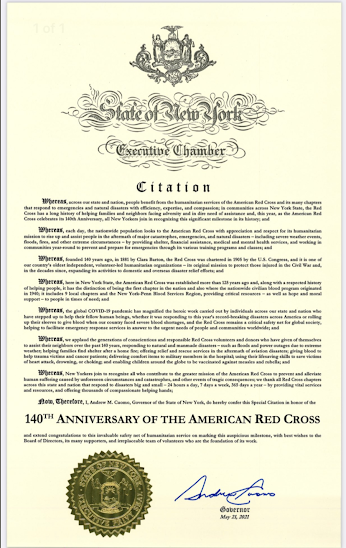 Over the last seven days, the Greater New York Red Cross provided emergency assistance to 189 adults and 90 children following 61 local disasters. Here are some highlights from last week and a preview of upcoming activities. (See below)

Upcoming Events and Activities
Posted by Eliana at 5:32 PM No comments:

Over the last seven days, the Greater New York Red Cross provided emergency assistance to 77 adults and 26 children following 43 local disasters. Here are some highlights from last week and a preview of upcoming activities. (See below)
Last Week in Review
Upcoming Events and Activities

Posted by nyredcross at 3:06 PM No comments:

Over the last seven days, the Greater New York Red Cross provided emergency assistance to 121 adults and 25 children following 51 local disasters. Here are some highlights from last week and a preview of upcoming activities. (See below)
Last Week in Review
Upcoming Events and Activities

Posted by nyredcross at 4:57 PM No comments: 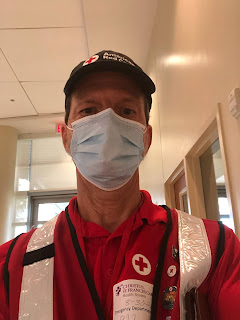 The fire that tore through an apartment building in Jackson Heights, Queens, last month, leaving almost 500 people homeless, was devastating. When Doug McNally, a Disaster Mental Health Specialist for the Red Cross, arrived on the scene, he met many residents struggling to cope with the aftereffects of the tragedy.

“I was assigned to go with the people back to the apartments for the first time, which was very emotional for them,” he said.

Among the victims was a 23-year-old woman who had spent her entire life in the building and whose family had lost almost everything they owned to smoke and water damage.

“She walked down the hall with me, telling me the names of her neighbors, with tears in her eyes,” he said. “Her little hallway neighborhood was destroyed.”

As a trained social worker and attorney, McNally knew that one of the best things he could offer was an empathetic ear.

"I help people in dealing with crisis,” he said. "Just to be there and to listen to them — that's the first step toward their recovery."

Since joining the Red Cross 2 ½ years ago — after going back to school at age 65 to get a Master’s in Social Work — McNally has provided emotional support to victims of both natural and man-made disasters. As coordinator of Long Island’s Rapid-Response Mental Health Team, he’s responded to fatal fires and a massive sewage spill. He’s also deployed to the scenes of heart-wrenching tragedies in other parts of the country: California wildfires, Arkansas floods and a Louisiana hurricane.

He vividly recalls a survivor of the 2018 wildfires who told of making an incredibly difficult decision in the midst of the disaster.

“It was really tragic what some of those people went through — the stories they were telling me of trying to get out of the fire. One person in particular said, ‘I saw my neighbor — he had to pull over. And I knew if I stopped I probably wouldn’t get out. So I kept going.’ And the neighbor did not get out."

“Considering all the trauma brought on by the disasters we respond to as an organization, it’s so important to have mental health volunteers like Doug, trained to help individuals cope with these complex emotions,” Spaccarelli said. “Doug exemplifies compassion and professionalism.”

McNally, a longtime Northport, N.Y., resident and partner in a Melville law firm, found his true calling after enrolling at Stony Brook University in 2016 to get a Master’s at an age when many people are thinking of retirement. His goal was to emphasize the “counselor” part of being a counselor at law.

“To me it was a natural segue because I had focused my practice in the area of family law, estates, guardianships,” he explained. “Solving people’s legal problems was somewhat easy, but I never felt like I got to the root of their problems. I wanted to better understand what was going on and be a better counselor.”

While on campus, he participated in a simulated disaster drill that inspired him to become a Red Cross volunteer. McNally also found a way to give back to Stony Brook, using his legal background to help create — and co-teach — a popular course on forensic social work.

Now, after 40-plus years practicing law, the 69-year-old grandfather of 5 is set to retire in August. Yet he has no plans to end his Red Cross work.

“I gain so much more than I give,” McNally said of volunteering. “I just feel blessed that I’ve had an opportunity to help other people.”

Though the past year has been difficult due to COVID-19 restrictions, McNally sees a light at the end of the tunnel.

“I look to return to where we can get closer to people and not have to maintain that distance and be constantly vigilant about exposure.”
Posted by nyredcross at 12:25 PM No comments: 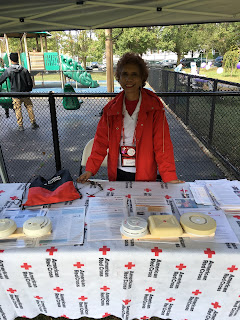 Born in British Guyana and educated in England, Margaret Sukhram is a Nurse Practitioner currently living in Long Island. She's been with the Red Cross since 2012. In addition to her work in Health Services, she also volunteers with Services to the Armed Forces, the home fire safety program, Youth Services as well as the Disaster Action Team. And she also gives of her time to other organizations, including A-1 Universal and the New York State Department of Health AIDS Institute.
Where have you been deployed to outside of Long Island?

I have done 14 or 15 deployments in person and virtual, including Hurricane Harvey in Texas, wildfires in California and Hurricane Michael in Florida. Big local responses as well, like Hurricane Sandy and Hurricane Irene.
Which response out of all those was the most memorable?

Oh gosh, memorable? Memorable could be all of them in different ways. Each disaster is so different, but one memory stands out. There was a lady, at one of the disasters, Hurricane Michael in Florida. She wouldn't sleep at the shelter where I was working. She was sleeping in her car. She was very angry, but she would come in and talk to the nurses but not the Mental Health volunteers. We thought she needed Mental Health support. And I remember her saying, "It's like Kubler-Ross [five stages of grief ]. I'm not ready to move on. I'm still angry." So we talked and we talked and we knew where she was at, in the spectrum of Kubler-Ross. And finally after talking with her, we were able to get her to sleep in the shelter and not in the car. And she eventually was able to talk with a Mental Health counselor. And later, before she left, she said AARP offered to interview her for a story about losing her home and everything. Needless to say, a few months later she was in the AARP magazine. So that was a great thing to see us help her to build some kind of resiliency and move on. She was able to accept her situation and share her story with others. So that was a wonderful experience for me, to know that someone who was hurt in a disaster was able to build some resiliency and share her story so others would know that they are not the only ones. There are lots of different stories. Each disaster is different.
What has volunteering brought to your life?

Such richness. I feel richer everyday for volunteering. I feel gratification. I feel that I'm making a difference in people's lives. And I feel that when you are kind to people, kindness pays off. I love to see people smile. You can see relief in them when they know that people are listening to their stories. It has just brought richness to me as a person, as a human being.

Volunteers for the Red Cross, I feel, are very special people, and I've developed great friendships with people both in different states that we keep in touch with and locally. I love to work with the Red Cross'ers because I feel that they are special people to want to donate their time and energy to this cause of helping others.
Posted by nyredcross at 11:55 AM No comments: 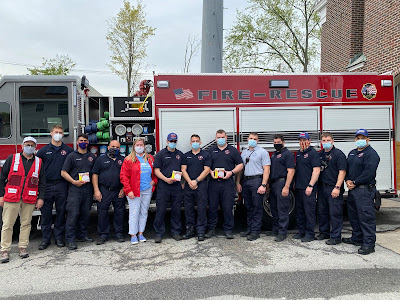 Fairview Fire Department installed over 300 free fire alarms in 4 days.
Over the last seven days, the Greater New York Red Cross provided emergency assistance to 86 adults and 30 children following 42 local disasters. Here are some highlights from last week and a preview of upcoming activities. (See below)

Posted by Caitlin Lima at 3:09 PM No comments: