Over the last seven days, the Greater New York Red Cross provided emergency assistance to 77 adults and 20 children following 40 local disaster responses. Here are some highlights from last week and a preview of upcoming activities. (See below)

Posted by nyredcross at 5:45 PM No comments:

Over the last seven days, the Greater New York Red Cross provided emergency assistance to 93 adults and 30 children following 42 local disaster responses. Here are some highlights from last week and a preview of upcoming activities. (See below)

Posted by nyredcross at 5:09 PM No comments:

Over the last seven days, the Greater New York Red Cross provided emergency assistance to 24 adults and 6 children following 23 local disaster responses. Here are some highlights from last week and a preview of upcoming activities. (See below)

Posted by nyredcross at 11:35 AM No comments:

Over the last seven days, the Greater New York Red Cross provided emergency assistance to 72 adults and 19 children following 47 local disaster responses. Here are some highlights from last week and a preview of upcoming activities. (See below)

Posted by nyredcross at 2:42 PM No comments: 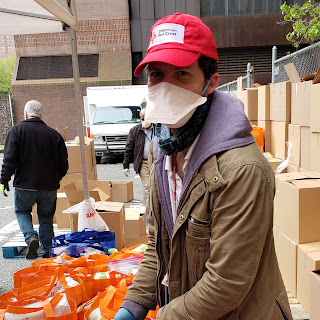 Robert Manley began volunteering for the Red Cross two years ago after being inspired by the help he received after losing his home to a fire. He initially joined as part of the Sound the Alarm Home Fire Campaign before transitioning to the disaster response team. During COVID-19, Manley, a restaurant worker, lost his job and decided to spend as much of his free time as possible volunteering. When he’s not taking disaster response shifts, he’s volunteering at one of our COVID-specific programs. He came to the United States from France nine years ago.

What happened on the night of the fire that destroyed your apartment?

About two years ago, I was living in Harlem with my girlfriend at the time, in a very nice apartment, and it was probably the apartment I invested the most money in, in terms of the time and the renovations. On a peaceful Saturday evening at about nine or ten at night, after we had a nice walk in the park, the fire started in the downstairs neighbor’s apartment, right under ours. The fire started in his living room; the tenants were photographers and they had a couple of things like film and rolls of paper that were easily flammable, and the whole place just caught on fire in a matter of seconds. As soon as our alarm went off, one of them came and knocked on our door like a madman, trying to warn us about the fire. Interestingly enough, a week or two before the fire, I was changing the batteries in our smoke detector, and I went on to ask my girlfriend: “Do we have a plan in case of a fire?” and “Which exit do we use?” We discussed that and made a quick little plan, and that was definitely a good thing for us to do. Our alarm gave us two necessary minutes of warning for us to get whatever we could get and leave.

I immediately let my girlfriend know that we had to leave the apartment, and I grabbed one of my cats and she grabbed the other one. As we quickly came out of my apartment, we saw nothing but a black cloud, and it was almost pitch dark; I couldn’t see the light in the hallway. We ran to one fire escape, but that happened to be where the fire was happening. So, we ran to the other fire escape on the opposite side of the apartment, and we started climbing down this old, shaky fire escape with cats wrapped in our arms, panicking. The firefighters who were responding to the fire actually thought that we had babies in our arms, so we were the first ones to get rescued. When they saw that it was just cats, they were like “thank God.”

After the fire, someone from the Red Cross showed up and offered me the assistance that I now provide every time I go out [as Red Cross responder], and that was really an epiphany for me. It made me realize that you can help your neighbors, that you don’t have to travel to the other end of the world to help out, and this made me want to volunteer locally with the Red Cross. Funny enough, when I started off with the Red Cross, it was with the Sound the Alarm campaign, to install smoke detectors in people’s houses and also teach them about resources to have in the case of fires, such as an escape plan and a meeting point with family, as well as a couple of things to always have around the house.

How have you been balancing work and volunteering throughout this period of COVID-19?

I work in the restaurant business, and when COVID-19 happened and restaurants closed, I was like "I'm not going to go back to the restaurant anytime soon, so why don't I volunteer more for the Red Cross?" The fact that I don't have a professional job right now has given me the opportunity to volunteer a ton. I was initially planning to quit my job two weeks after COVID-19 initially hit, and it just happened earlier. Then, I was planning on traveling around the United States but obviously we can't travel. So, being in New York City definitely makes it a good time to invest yourself in volunteer work, especially when you could be doing a lot more. I've actually been much more satisfied volunteering than actually working. 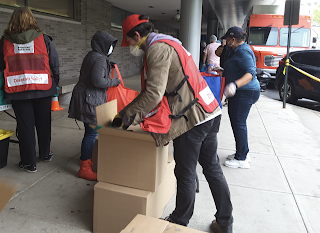 How have your interactions with other Red Cross responders and clients been impacted by COVID-19?

At the very beginning of COVID, when people were not understanding what was happening at all, everyone was pretty petrified, not knowing what to do at all. People who had fires, it’s always traumatic because those people don’t have a house for the time being, but they were having this happen in the middle of something they didn’t know they were going to live through. They didn’t know where they’d be able to find shelter, how to find groceries. Everything became so much more complicated, and all the resources that used to be taken for a given almost disappeared. You could see the fear of people, not 100% about the fire, but about the uncertainty in the face of COVID. They were starting from zero in a world they don’t know how to fully operate in. That was definitely that I felt in people’s eyes.

The way COVID has changed our work is really just for protective measures. Our job is to make people not feel alone and in despair, and that part of our mission has not changed. We’re trying to smile even bigger so it shows beyond our masks, so that people can see it in your eyes that you’re smiling and ready to help them.
Posted by nyredcross at 11:27 AM No comments:

Over the last seven days, the Greater New York Red Cross provided emergency assistance to 47 adults and 14 children following 40 local disasters. Here are some highlights from last week and a preview of upcoming activities. (See below)

FOR RELEASE: NY Red Cross Continues to Mobilize for Isaias; Urges Residents to be Safe and Prepared for the Storm 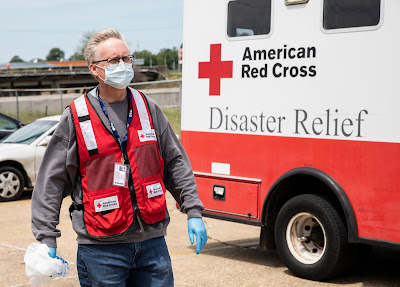 NEW YORK, August 3, 2020—As Tropical Storm Isaias makes it way up the East Coast, the American Red Cross in Greater NY continues to mobilize resources and staff to provide emergency assistance to residents impacted by this storm. The Red Cross also urges families to be prepared, safe and informed.

“The Red Cross is working closely with local offices of Emergency Management and other community partners to coordinate our response and address any needs brought on by the storm,” said Susan Rounds, interim CEO, American Red Cross in Greater NY. “We urge our neighbors to take this storm seriously and take the necessary precautions to stay safe.”

At this time, the Red Cross has staff members on standby to open 10 shelters across the region (New York City, Long Island, Rockland and Westchester counties and Greenwich, Conn.). These teams are trained to provide comfort and care to evacuated/displaced residents while taking into account new safety protocols necessitated by COVID-19. As soon as the storm passes, Red Cross Disaster Assessment volunteers will canvas areas prone to flooding, survey damage of the most affected communities, make contact with residents and, if needed, begin coordinating assistance including the distribution of relief supplies.

Residents should monitor the news and follow warnings issued by Emergency Management officials. It is important for families to have supplies on hand at home—i.e. food, water, flashlights, chargers, batteries, medication, cash—in event that they have to shelter in place and a bag ready to go with some of the same supplies if they have to evacuate. The Red Cross has a free Emergency App available for download with preparedness tips, info on shelter locations and weather alerts. The Red Cross Emergency App can be found on the Apple Store and the Google play Store.

The Red Cross is also seeking new volunteers for their Red Cross Hurricane Reserve Corps, a new, trained group of team members ready to support affected communities in the event of a major disaster in our region. This large number of local “reserve” volunteers is needed due to the added constraints brought on by COVID-19, difficulty in bringing volunteers from other parts of the country and the projected intensity of the 2020 Atlantic Hurricane Season. The Atlantic Hurricane Season runs from June 1 to November 30, 2020, with its peak in the Northeast in August and September. To join, visit redcross.org/volunteertoday and scroll down to find the “Shelter” or “Health Services” roles. Training for these new volunteers will be conducted online.

About the American Red Cross:
The American Red Cross shelters, feeds and provides emotional support to victims of disasters; supplies about 40 percent of the nation's blood; teaches skills that save lives; provides international humanitarian aid; and supports military members and their families. The Red Cross is a not-for-profit organization that depends on volunteers and the generosity of the American public to perform its mission. For more information, please visit redcross.org or cruzrojaamericana.org, or visit us on Twitter at @RedCross.
Posted by nyredcross at 4:13 PM No comments: