Over the last seven days, the Greater New York Red Cross provided emergency assistance to 75 adults and 26 children following 47 local disasters. Here are some highlights from last week and a preview of upcoming activities. (See below)

Last Week in Review
Upcoming Events and Activities
Posted by nyredcross at 5:34 PM No comments:

Over the last seven days, the Greater New York Red Cross provided emergency assistance to 93 adults and 23 children for 42 local disaster responses. Here are some highlights from last week and a preview of upcoming activities. (See below)

Last Week in Review
Upcoming Events and Activities
Posted by nyredcross at 10:44 AM No comments:

“Three Questions” is an American Red Cross in Greater New York blog series featuring staff, volunteers, and partners who help carry out our humanitarian mission. Through these short interviews, we hope to shine a light on our different programs and get to know those who make this work possible. 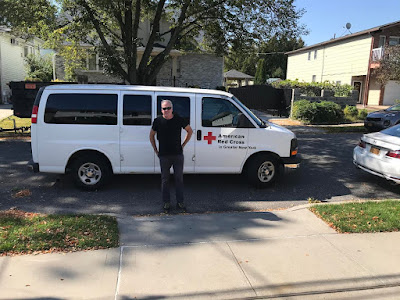 Staten Island resident Bill Chrystal joined the American Red Cross in Greater New York as a volunteer in Fall 2019 after retiring from a 35-year career in financial services. In addition to his role as a Red Cross Disaster Responder, Chrystal volunteers with an oyster reef restoration organization and serves on the executive committee of a community garden.

Why did you pursue this volunteer work the Red Cross?

Prior to the Red Cross, I was already involved with a couple volunteer organizations, but there was a certain level of abstraction to the work I was doing. I wasn’t working directly with the people that we helped. With the Red Cross, I was drawn to the immediacy of its mission. You deal directly with the people that you provide relief to, and you’re out in the field doing it.

During my entire career, I’ve always performed well during tense moments and pressure-filled situations. A long time ago, a co-worker told me that the crazier things get, the calmer I seem to become. Out in the field, sometimes that’s a good thing.

Do any of your experiences on scene of disasters stand out?

Recently I had two calls in the Bronx on a single day.

The first call was for a fire at a single-family home. It was windy, rainy, miserable day. When I showed up, there were multiple generations of the family sitting outside under a tarp. They were surrounded by possessions the fire department had thrown out into the yard. Thankfully, no one was injured, but it was a bad situation. You could see through the roof and most of the windows were gone. I helped them call the Red Cross emergency hotline, and we secured a prepaid card to buy food. The woman who owned the home seemed like a tough cookie the whole time, but when I handed her the card, she broke down crying.

The next call was to another fire, this time at a small apartment building. When I arrived, the fire was out and the fire department had left, but the residents were still outside. Two men were arguing, so I stepped in and convinced them that there were more important things to focus on. They calmed down, then we got a lot of people hooked up with relief and hotel rooms.
That was a good day.

How has volunteering with the Red Cross impacted your life?

It’s been positive in a lot of ways, and volunteering allows me to reconnect with my past. When I was growing up, my family was not well-off. Seeing people in bad circumstances kicks back memories from when my family needed assistance, and a lot of times there wasn’t anyone to help us out. So, when I go to certain places in the Bronx, Queens, and other outer-borough neighborhoods, I understand how even one bad thing happening to a family can be a tremendously big setback. It feels good to be out in the field, to offer some assistance, and hopefully help them move forward.
Posted by nyredcross at 10:37 AM No comments:

Over the last seven days, the Greater New York Red Cross provided emergency assistance to 117 adults and 47 children for 38 local disaster responses. Here are some highlights from last week and a preview of upcoming activities. (See below)
Last Week in Review

Posted by nyredcross at 7:16 PM No comments: 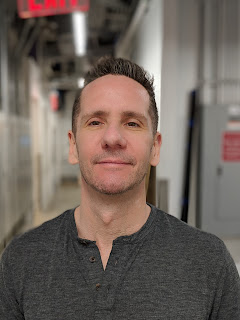 For many New Yorkers, the ongoing pandemic turned 2020 into a year defined by uncertainty and anxiety. For Mark Healey, a resident of Manhattan’s Upper East Side, things were particularly challenging. In April he contracted COVID-19, and in September lost his job. Six weeks later, Healey faced yet another misfortune, a fire in his apartment building.

“Around 1:30 A.M. on October 25th, I heard commotion...it sounded like my upstairs neighbor was walking back and forth quickly,” said Healey. “I wasn’t sure if I was still dreaming...and then I heard people start to scream.”

He threw on jeans and sneakers and rushed, t-shirt still in hand, through the smoky fourth-floor hallway and down to street level where dazed residents gathered in front of the twenty-four-unit structure watching the fire on the fifth floor.

“You could see flames coming from the side of the building,” he said, “...it was pretty wild.”

As the fire grew, Healey became concerned about it potentially spreading to the residence next door. “There is a brownstone from the Civil War-era, one of the few wooden structures still left on the street. I went over and pounded on their door.”

Around 4:30 A.M. Healey was able to get inside his apartment to assess the damage. “My mattress was soaked, water was still leaking from the ceiling, and it stunk. My apartment was unlivable. I didn’t know what to do.”

After spending a few hours at a nearby hotel, Healey returned to his building. A Red Cross team had visited the site earlier in the morning and left contact information prominently posted in case anyone required additional assistance. He called the emergency number not knowing what to expect.
“I think of the Red Cross as a huge organization that deals with disasters,” he said. “But the speed [the team] reacted to my phone call...it blew me away.” He spoke with a case manager just minutes after calling. “It was unbelievable...there was no hassle involved. It was the biggest sense of relief ever…I had lost my job...and not having a place to go was super stressful.” This anxiety was made worse by his lack of renters’ insurance.

Within twenty minutes, the Red Cross case manager confirmed some good news for Healey: the Red Cross would cover the cost for several nights at a hotel and within an hour he was settled into a room. “The receptionist was so sweet, she understood I had been in a fire and got me a room in the back of the hotel so that I wouldn't hear sirens from the street.”

Not long afterwards, a Red Cross volunteer hand-delivered a prepaid debit card to cover food and other essential expenses. “It was remarkable,” Healey said. “That a Red Cross representative showed up that quickly, in such a big city, with everything going on.”

But Healey’s challenges extended beyond the next several nights. Though he could stay with family if necessary, his closest relatives lived five hours away from NYC. That distance combined with the ongoing COVID-19 crisis and his own health concerns would make traveling back and forth to find a new apartment challenging.

Again, the Red Cross stepped in to help. This time, by facilitating a week-long extension to Healey’s hotel stay. “It gave me a chance to get all my ducks in a row, to talk to my family...and search for a new place [to live.]”

Recovery has not been easy, but the assistance provided by the Red Cross helped Healey get back on his feet. He used the hotel as a home base while organizing his possessions and securing a new apartment. And the extra time made it easier to prepare for a safe trip to Rochester, NY to spend time with his family.

In early December, Healey returned to NYC and moved into a new apartment. Shortly after settling in, Healey spoke again with the Red Cross. When asked about his new home, he simply responded with a sigh of relief: “I love it.”

Posted by nyredcross at 10:27 AM No comments:

Over the last seven days, the Greater New York Red Cross provided emergency assistance to 145 adults and 49 children for 58 local disaster responses. Here are some highlights from last week and a preview of upcoming activities. (See below)
Last Week in Review
Upcoming Events and Activities

Posted by nyredcross at 3:18 PM No comments: