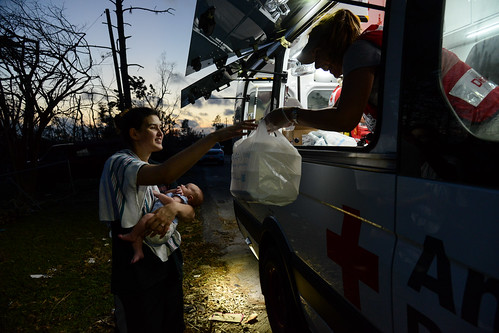 IMAGES OF 2018: A look back at some of the moments that marked
the last 12 months for the American Red Cross in Greater NY

Over the last 10 days, the Greater New York Red Cross provided emergency assistance to 175 adults and 55 children following 62 local disasters. Here are some highlights from last week and a preview of upcoming activities. (see below)

Over the last 7 days, the Greater New York Red Cross provided emergency assistance to 146 adults and 44 children following 52 disaster responses. Here are some highlights from last week and a preview of upcoming activities. (see below)

Unconditional love...that's what I think of when I see someone with their dog. I met Brandi at the American Red Cross Silver Dollar Fairgrounds shelter a few days ago. Her hair color and vivacious personality caught my eye. I always like friendly people. She has been through so much yet she keeps moving forward.

Brandi lived in Paradise her whole life. This small town is where she worked, got married, had a child, went to church and went to school. She loves her town like I love Port Washington my hometown. She is in a state of grief for many things...the loss of her home and her friends and her way of life as she knew it to be. And also for her peace of mind. She says the nightmares haven't started yet because she can't sleep

Boss (her dog) saved Brandi's life by alerting her to the fire! She had only minutes to escape because the neighbor's home was already on fire when he woke her up! Her grandmother's ring is the only thing she managed to grab on the way out. She hopped into a friends car which they soon had to abandon because the back tire popped from the intense heat! On foot briefly, another friend picked her up and they attempted again to get out of town. But they were gridlocked for a few tense minutes on what seemed like the only road out of town. Seeing the sheriff they got out of the car and asked him where should we go? Which direction? The sheriff replied....just run. Thankfully, the congestion eased and only by driving through a wall of fire on the road did they manage to escape with their lives.

Brandi saw some unspeakable sights that do not bear repeating. Thankfully, we have some wonderful Disaster Mental Health volunteers that Brandi has been talking to with regularity.

"The Red Cross has been so kind and accommodating especially with Boss. They didn't have to be."

This is just one story of the way the American Red Cross has cared for the evacuees of Paradise.

Donate if you can. The story is out of the news but our work here continues. #HOPEStartsWithUs

Over the last 7 days, the Greater New York Red Cross provided emergency assistance to 146 adults and 37 children following 53 disaster responses. Here are some highlights from last week and a preview of upcoming activities. (see below)

Notes From the Field: the Camp Fire 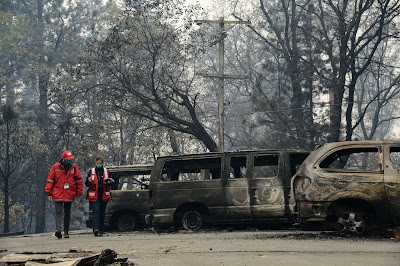 Standing outside a shelter for wildfire evacuees on my first full day in Butte County, Calif., I met a couple from the town of Paradise who were forced to flee their home 36 hours earlier. Holding back tears, the husband detailed his traumatic escape while he showed me photos of the apocalyptic scenes he witnessed driving to safety. Despite losing his house and all his belongings, all that mattered to him was that his family was safe.
Throughout my deployment to Northern California I heard similarly harrowing stories every day. Maybe it was my Red Cross jacket but residents were very forthcoming about their ordeal. A man in line at Starbucks told me about his evacuation and how he knew to begin franticly loading up his car after hearing the fire which he said sounded like a freight train in the canyon just behind his house. A woman at a gas station, also left homeless by the fire, explained to me how her son ran nearly five miles to safety through thick black smoke after abandoning his car because traffic was at a standstill. An elderly woman I met at a shelter shared with me how she was forced to flee alone in her car, and how her terrifying drive to safety surrounded by flames took hours.

All the evacuees I met were still in shock and all but a few held out any hope that their houses were still standing. Many knew the fate of their homes because they were engulfed in flames by the time their cars reached the end of their driveways. That’s how quickly the fire moved.

A few days into my deployment, I saw firsthand the destruction that these families fled days earlier. Accompanied by officials from Cal Fire, my team visited the town of Paradise. What we witnessed was surreal and disorienting. Neighborhoods were barren, full of homes burned to their foundations, charred appliances and vehicles, melted metal and glass, pockets of smoldering ash. Occasionally we’d come across a sign of life and color, like a fully intact child’s toy.

None of the families I personally met lost loved ones to the fire, thankfully. But that is not to say that the anxiety and scope of loss was not palpable. In front of each shelter were bulletin boards containing lists, names and photos of missing individuals. There were also notes posted to these boards speaking directly to the missing: “I love you” “we miss you.” It was heartbreaking to see those boards fill up day after day.

But my time in California was also marked by moments of hope. Shining a light through the smoke and darkness was the generosity that poured in from near and far. I traveled from New York City to work with the Red Cross and met many fellow team members, mostly volunteers, from local communities, several who lost their homes, as well as from dozens of states across the country. Each day they worked tirelessly to help: providing shelter, meals, water, emotional support, health assistance, reunification and so much more.

And there were countless other individuals and organizations large and small providing just about anything you could imagine for the survivors: food, coffee, internet service, face masks, wifi, phones, clothes, music performances, services/supplies for pets, hay for rescued livestock, rides to the doctor, a room in their homes.

After I explained to an evacuee at a shelter where the meals were came from, the man looked at me, deeply humbled, and asked, “Why can’t we be this kind to each other every day?”
Posted by nyredcross at 11:23 AM No comments: