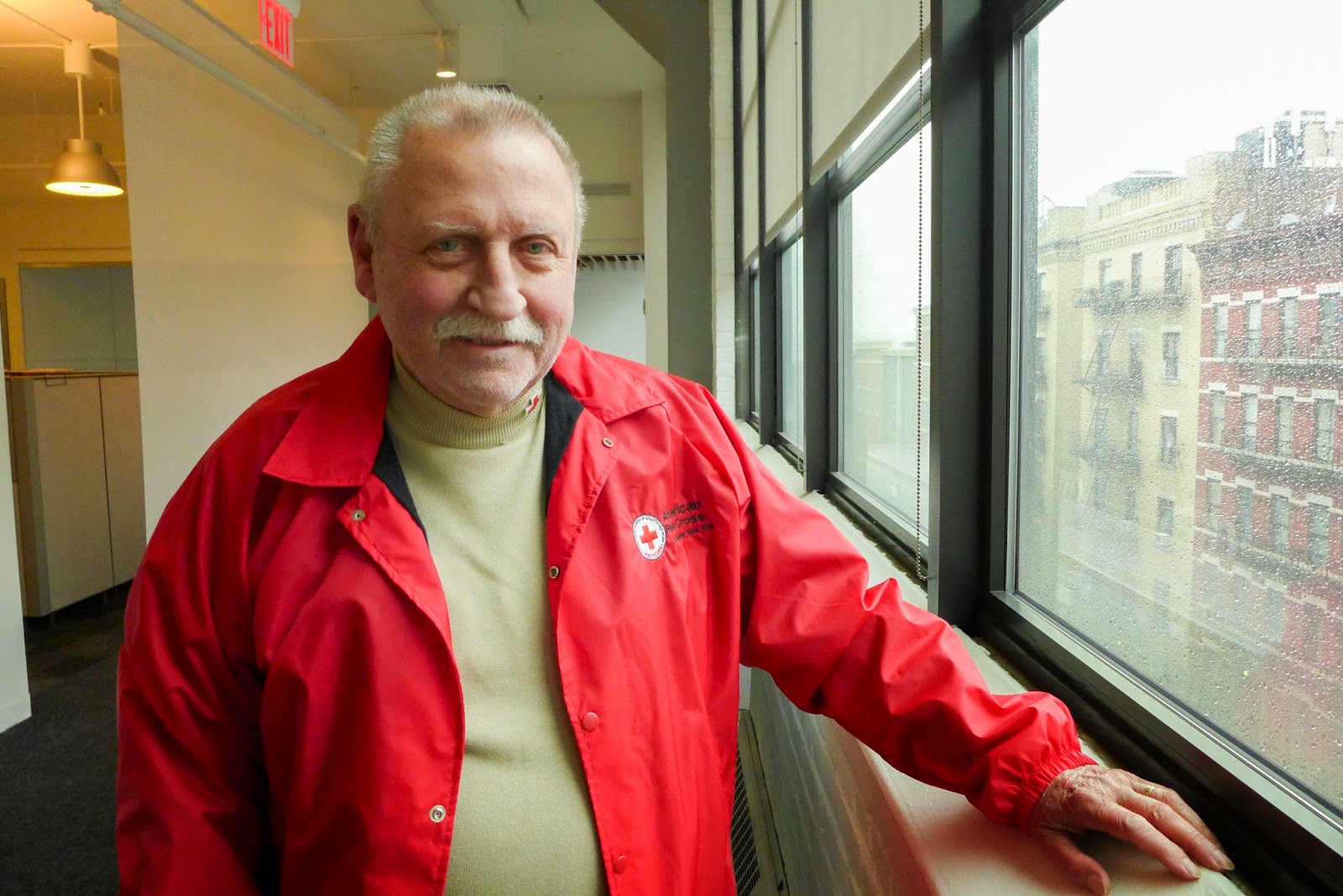 Long-time Red Cross volunteer Fred Leahy, who serves as Sr. Volunteer Partner to Red Cross Northeast Division Disaster Executive Tom Vitullo, is scheduled to travel tomorrow to North Carolina, where Red Cross is helping those affected by tornadoes. Fred will act as the Community Partnership Services Manager, helping to coordinate relief efforts between the Red Cross and its community partners.

Fred said, “This will be my 27th disaster response since Katrina. So I pretty well know what I am going to face. The destruction is always startling. But alleviating the human suffering is what I am really there for. I look forward to helping those affected by the severe weather begin to patch up their lives.”

Fred is just one of more than 500 American Red Cross volunteers who are providing comfort and hope across 11 states to help people affected by devastating floods and tornadoes. Read more.

Email ThisBlogThis!Share to TwitterShare to FacebookShare to Pinterest
Labels: Across the Country, Disaster relief, Down the Street 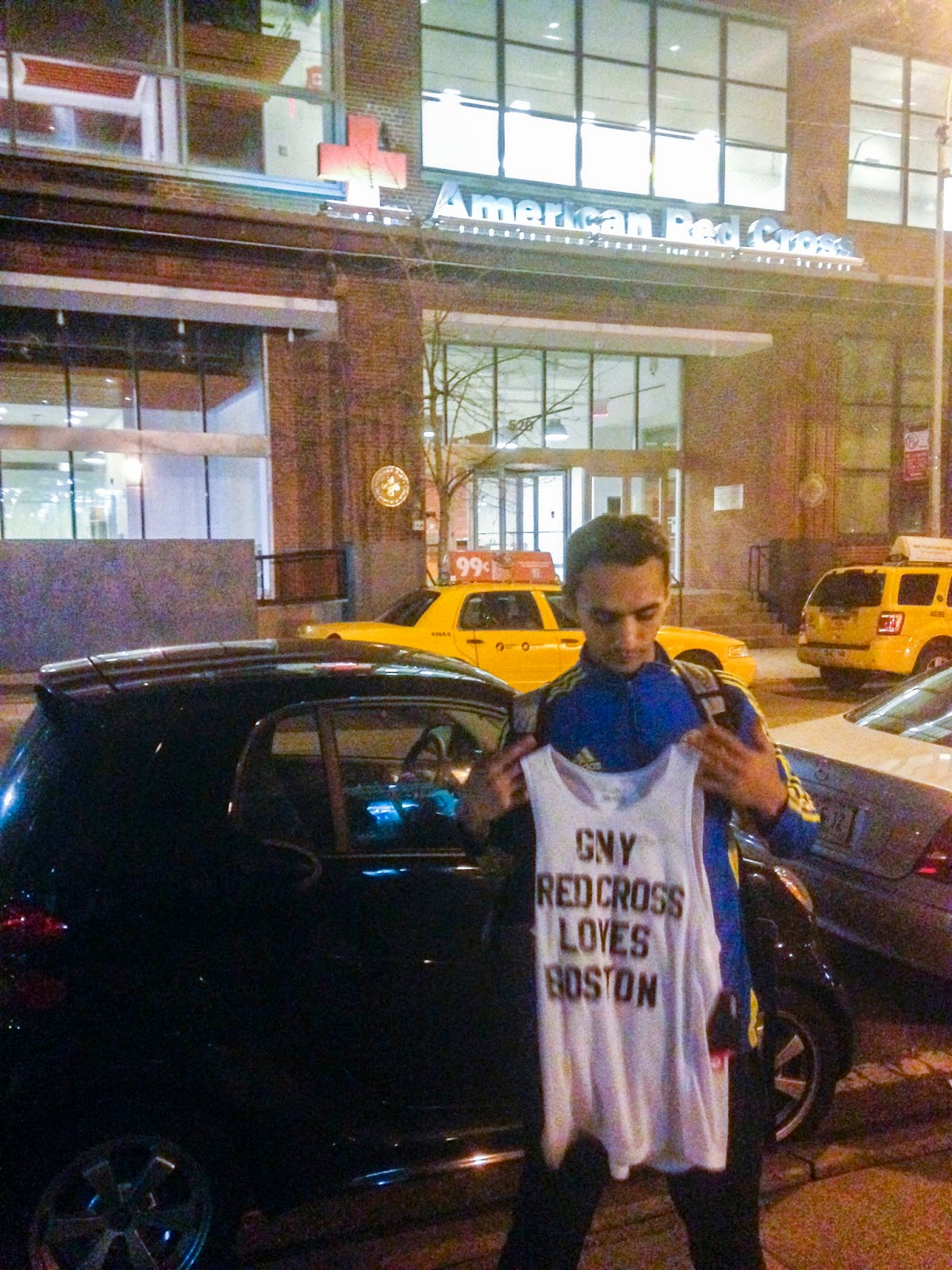 by Dora He and Anita Salzberg,
American Red Cross

The afternoon of April 12, 2013, Moroccan native and Greater New York Red Cross volunteer Hamsi Hicham had just finished the Boston Marathon and was gathering his belongings when he heard the bombs go off. He quickly texted his girlfriend, who was still running. (She was unharmed.)

Despite the trauma of last year’s event, the 35-year-old employee of Paragon Sports and auxiliary member of the NYC Police Department has put aside his worries and doubts and is once again running in the Boston Marathon today, a year later.

“We cannot let negative thoughts plant fear in our hearts,” Hamsi said. “All of us, we run for the victims. This marathon is a run for humanity.”

Hamsi, who became a Red Cross volunteer the summer of 2011, has been a competitive runner since he was a child, running various distances in numerous marathons. Last year, he ran a 100 km (62 mile) race in upstate New York. “In Morocco, we train hard. We like to win,” he said with a grin. “No matter how far you run, you feel like a superstar in your race.”

During Hamsi’s time at the Red Cross, he has provided assistance after large-scale disasters such as Superstorm Sandy, as well as everyday emergencies, including home fires. He says that volunteering with the Red Cross and running share many similarities.

“They both involve a voluntary choice to reach a goal and inspire people. Furthermore, both activities require intense dedication and spring out of a desire to improve our own lives, and the lives of others as well.”

Hamsi said he joined the Red Cross because of his passion to help others.

“It’s in my nature,” he explained. “I’m happier when I’m surrounded with people, and we are working together to do good things.

“The Red Cross in Greater New York is like a big family to me,” he added. “We as New Yorkers and volunteers feel the pain of the Bostonians. But the best way to heal is ... to run.”


Luis served as an FDNY firefighter for 18 years and was co-founder and chair of the Disaster Assistance Response Team (DART). The DART partnership between the Greater New York Red Cross and FDNY was formed in 1989. The team is made up of active and retired New York City firefighters and fire officers from New York City, Long Island and Metro New York North. For nearly 25 years, Luis served as "the glue" that kept DART together, deploying its members to provide disaster relief as part of the Red Cross following countless local and national emergencies. He worked both behind the scenes and in the field, having been deployed to 24 large-scale responses including the attacks on the World Trade Center Towers on September 11, 2001.

Additionally, he was honored for his dedication to our mission on numerous occasions, first as a Clara Barton Award winner in 1994 and as recently as October of last year when he and his entire DART team were recognized at our NY Red Cross Ball.

He was 59 and is survived by his four children and several grandchildren. Our thoughts and prayers go out to them during this difficult time.

Luis will be remembered as a Friend, Brother Fire Fighter, Red Cross volunteer who worked selflessly serving those in need and always as the DART leader.
Posted by nyredcross at 10:24 AM No comments:

Upper West Side resident Ana Maria never expected that her life would be touched by the American Red Cross. This past March, the teacher’s assistant was just settling into what she thought would be a relaxing evening after work. But that peace and quiet was disturbed when her neighbor stopped by and asked, “Are you cooking something, or is something burning?”

As she turned around to check her kitchen, Ana Maria saw thick smoke. She immediately called 911. As someone who suffers from asthma, she knew she had to get out of the apartment before she inhaled too much smoke. She grabbed her dog, Rodrick, and ran along with her neighbor and his two sons, who helped her out of the brownstone.


Outside, Ana Maria was greeted by two Red Cross responders. After making sure she was okay, because of the sub-zero temperature that night, they escorted her to their warm van. When firefighters deemed it safe to go back inside, Ana Maria found that her apartment had been destroyed. Because of this, the Red Cross volunteers provided Ana Maria with a prepaid debit card that would allow her to buy some new clothes and food.

Ana Maria ended up staying with a friend—who lived in the same building as Ana Maria’s sister — although she had considered the hotel accommodations offered by the Red Cross. Ultimately, she wanted to be close to her family.

Ana Maria recalled one moment that stood out to her during that difficult time. When a Red Cross caseworker called to ask Ana Maria if she needed help replacing her medications, Ana Maria said she was fine. Nevertheless, her caseworker said, “If things change and you need anything, call me back.”  Ana Maria described the encounter as “really reassuring.”

“The Red Cross gave me peace of mind. I didn’t know I was going to have that kind of reception,” she said. “The Red Cross volunteers made me feel good because they gave me hope. They said, ‘We’re here to help you; anything you need—that’s what we’ll do.’”
Posted by nyredcross at 1:55 PM No comments: 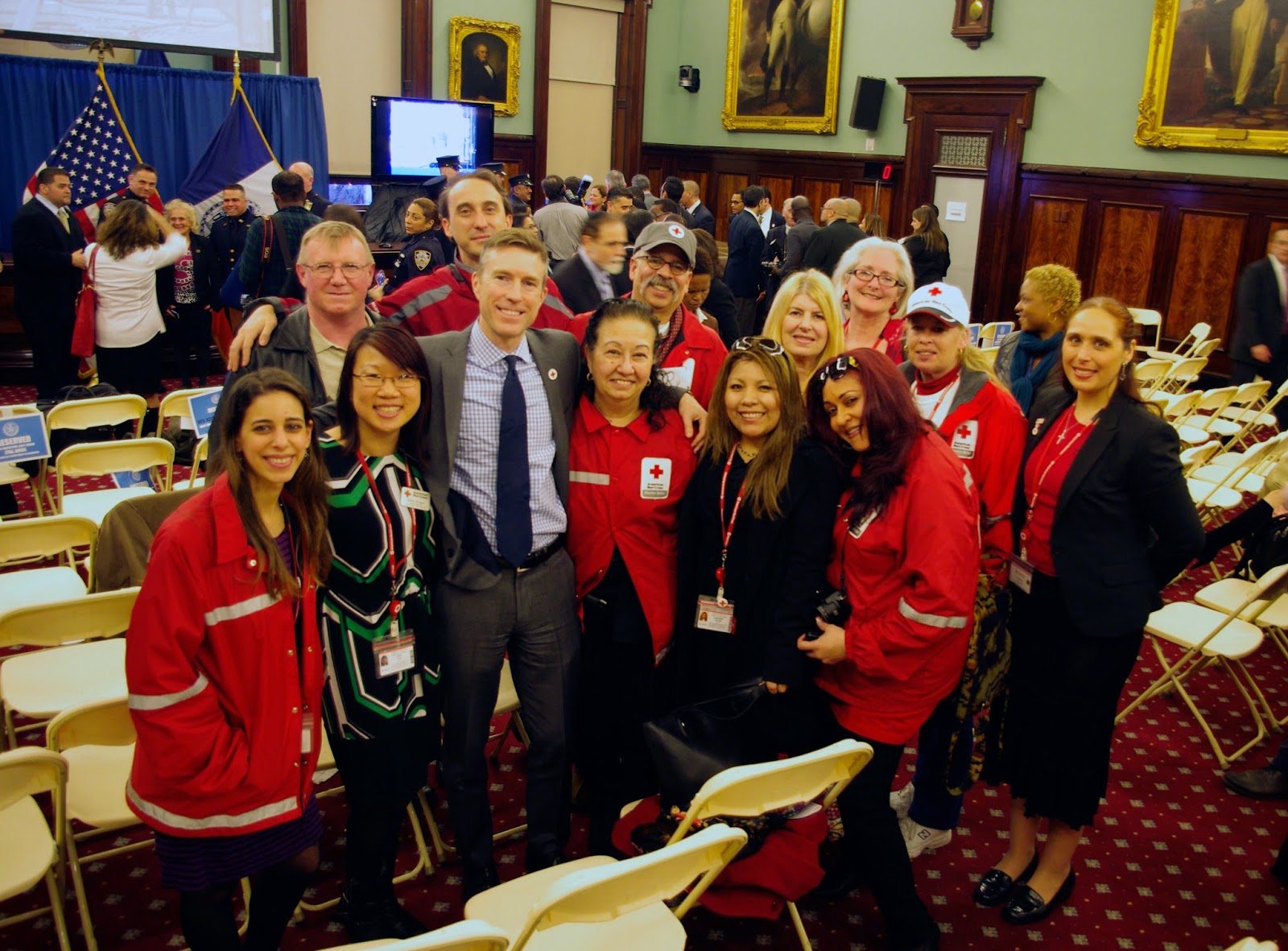 The evening of April 9, about a dozen Greater NY volunteers who participated in the East Harlem explosion response attended a reception at City Hall held to thank first responders, elected officials, city agencies, community groups and non-profits like the Red Cross who were part of the relief effort.

The event was sponsored by City Council Speaker Melissa Mark-Viverito and the City Council. This tribute, fittingly, took place during National Volunteer Week.

Here are some photos from the event. 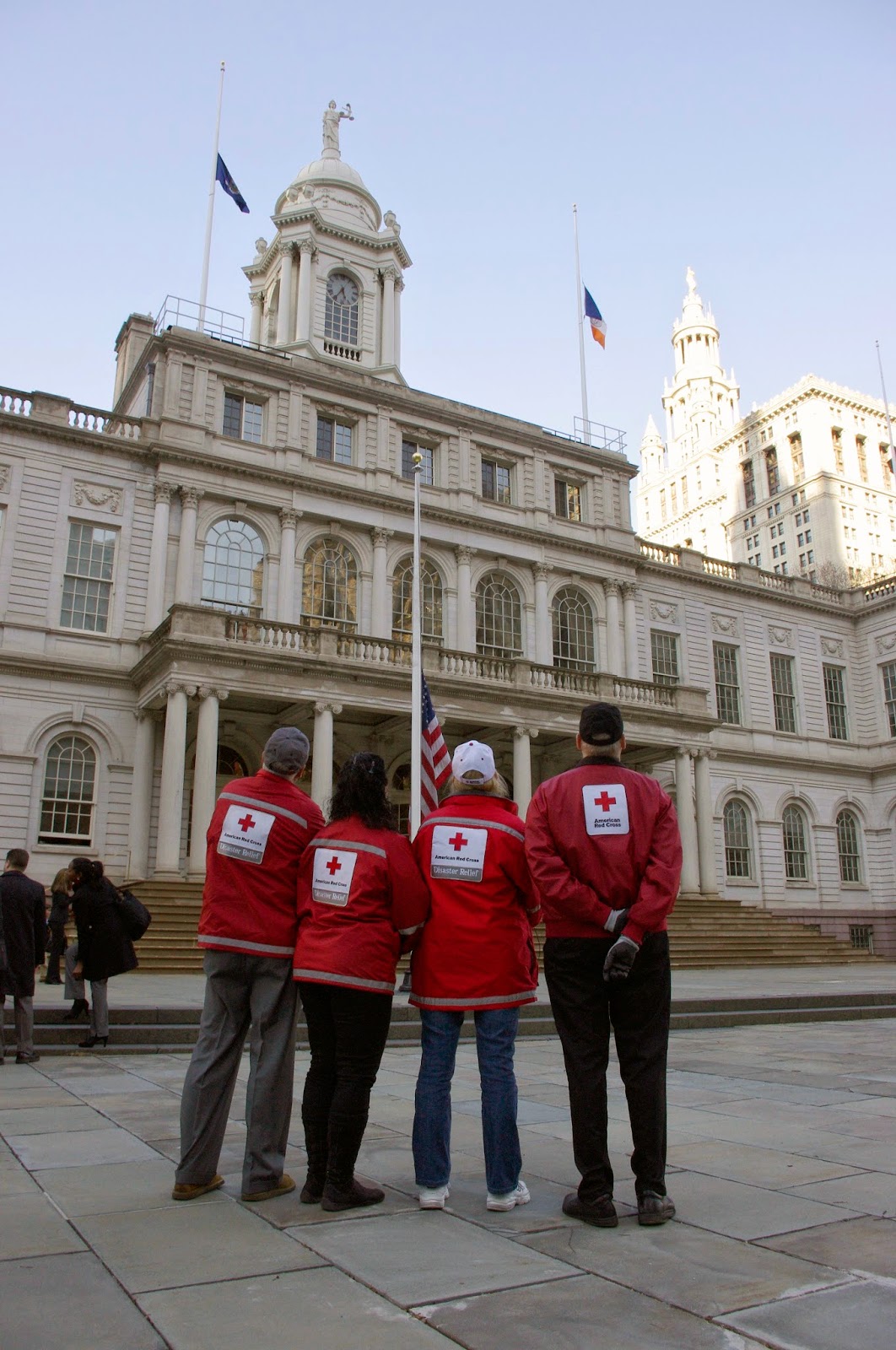 Email ThisBlogThis!Share to TwitterShare to FacebookShare to Pinterest
Labels: Down the Street, East Harlem Explosion, Manhattan 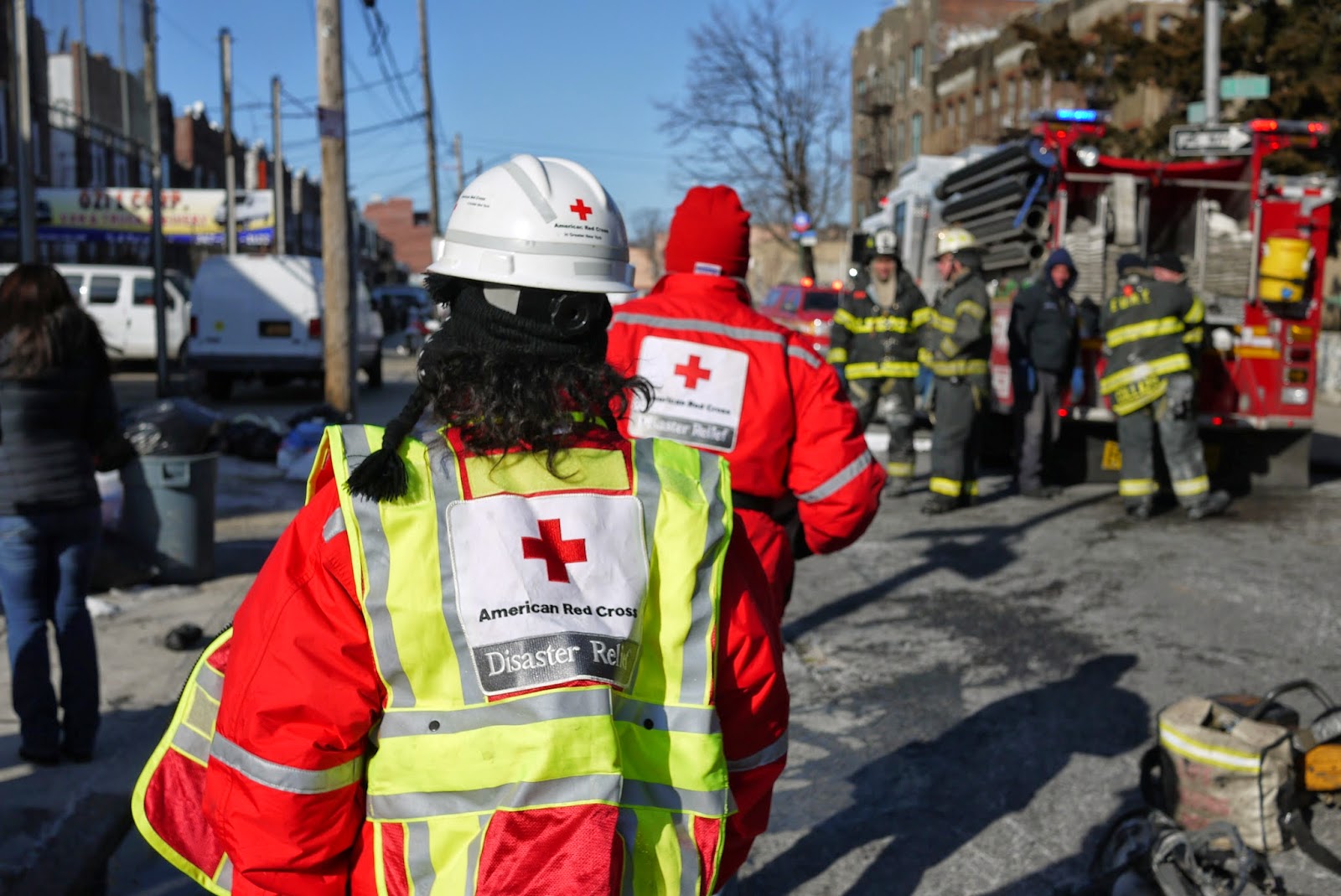 After a frantic call from her daughter, Sally DeVolt rushed home from work on a Friday afternoon to find that her apartment of 15 years had been destroyed in a fire.

Sally, a manager at a Staten Island diner, began to cry as she described what she saw.

“When I got home, it was not even home anymore,” she said. “There were so many firemen, so many fire trucks.”

She was thankful that her family — her son, her daughter-in-law, her daughter and her four grandchildren — all got out of the building safely. Because they fled with little more than the clothes on their backs, Red Cross disaster responders at the scene provided them with shoes, socks, tee-shirts, sweat suits and water.

“I did not know what the Red Cross did,” Sally said. “I’m so grateful.”

A few days later, Sally, who, with her family, was staying with neighbors, came to Greater NY Red Cross headquarters in Manhattan. A caseworker provided her with a debit card with funds for emergency food and clothing and information about next steps she could take for city housing, should the family require it.

“It’s a wonderful experience,” she said. “Because I had no idea all this help was out there. “I’m thankful to the Red Cross.”

“You mean there’s more to the Red Cross than blood drives and hurricanes?”

1.  The Red Cross is the largest humanitarian network in the world.

2.   The President of the United States proclaims March as Red Cross Month.

3. The Red Cross aided those who survived the sinking of the Titanic. 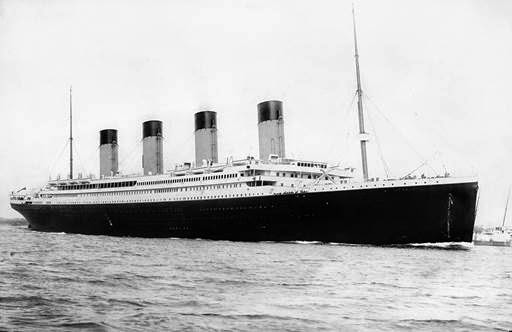 4.  On the night of the Northeast Blackout of 2003, Red Cross responded to more than 60 fires.

5.  In the movie Ghostbusters, Red Cross was at the ready to assist those impacted by the Stay Puft Marshmallow Man.

6.  The Red Cross can help you prepare for Godzilla and Sharknado.

7.  There are THREE symbols that represent the Red Cross Network Globally. 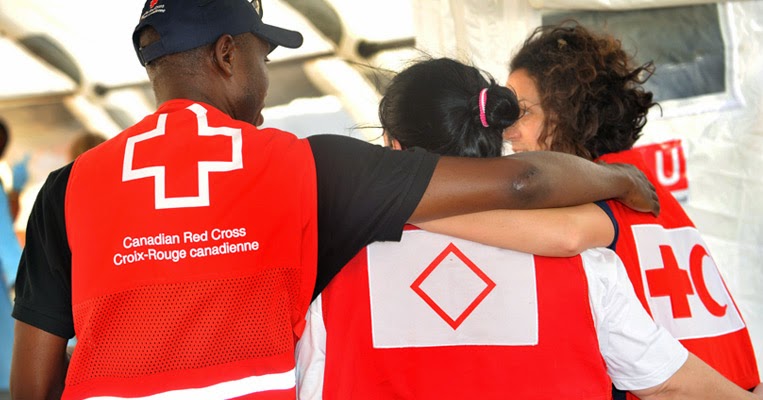 8.  90% of the disasters the American Red Cross responds to are home fires.

11. Red Cross is a part of the United Nations.

12. Volunteers constitute 90% of the total workforce to carry out our humanitarian work.

13. Every 60 seconds in the US, 44 people are assisted by the American Red Cross.

Posted by nyredcross at 4:59 PM No comments:

Painting, taping, sanding, and installing flooring: Nearly 75 American Red Cross volunteers teamed up on Saturday, March 29, helping to repair Sandy-damaged homes in Brooklyn, Queens, Staten Island and Long Island as part of a Red Cross Month Sandy Rebuild effort. Here is a look at their work through the lens of social media.

Posted by nyredcross at 12:33 PM No comments: