Over the last 7 days, the Greater New York Red Cross provided emergency assistance to 97 adults and 30 children following 33 local disasters. Here are some highlights from last week and a preview of upcoming activities (see below).

Posted by nyredcross at 3:06 PM No comments:

Solferino 2019: Back to our Red Cross Roots 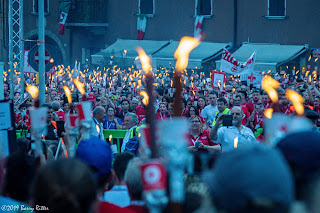 Over 10,000 Red Cross and Red Crescent volunteers and staff from all over the world gathered together in Solferino, Italy, from June 17 to June 23 to celebrate the Red Cross Movement. This annual meeting commemorates the Battle of Solferino (June 24, 1859) where the idea of the Red Cross was born and then founded by Henry Dunant.

An unofficial delegation of 10 Red Crossers from the Greater New York region participated in these emotional few days of friendship, history and learning that ended with a signature event called the Fiaccolata, a torchlight processional from Solferino to Castiglione delle Stiviere. Unity and joy were the main feelings they experienced. 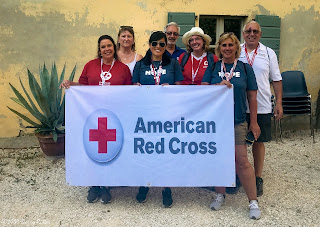 Vivian Moy, Red Cross volunteer from Long Island, took a leading role organizing this self-funded trip and gathering as many volunteers as possible across the United States. She created a website and a Facebook page to spread the word about it.

“I felt it was important to have a strong American presence in Solferino this year because in 2019 the International Federation of Red Cross and Red Crescent Societies (IFRC) was celebrating their centennial and the United States is one of the five founding national societies, along with UK, Japan, Italy and France,” Vivian said.

She also recalls that this gathering “it’s not only a celebration, it’s almost like a pilgrimage and a personal recommitment to the Red Cross mission”.

We asked the New York attendees about their most memorable moment in Solferino and this is what they answered:

Vivian Moy
Volunteer
Port Washington, New York
“I met the secretary of the Mostar Red Cross in Bosnia Herzegovina and we had taken a guided tour of the International Red Cross and Red Crescent Museum. At one point, they showed us a video of how the ICRC makes prosthesis for people who have lost limbs because of landmines and I could see that he was very emotional. He had massive injuries because he was a soldier and had gotten blown-up by a landmine, he was showing me his scars and telling me about fellow soldiers he had lost, so watching that video was very hard for him. I realized that we all have different humanitarian challenges in our own country and perhaps ours aren’t as challenging as war, famine and poverty but the willingness to help other people is so strong. I asked what is the greatest challenge in your chapter and he said I need more people to be trained in First Aid because of all the landmines in my country. We asked how many volunteers they had and said that on a regular basis is his son and daughter (…) At the end of the week he gave me a little box and he said this is a gift for the Greater New York chapter and is key to my city. I thought that was wonderful.” 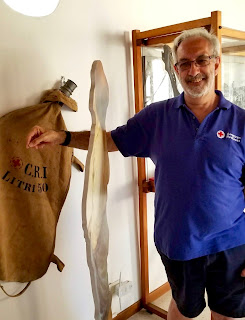 “It was the Fiaccolata that sealed the deal for me. I walk slower than most of my Greater New York team, so I had the opportunity to walk with folks from Italy, Israel, England, Germany, Pakistan and Romania amongst others. Ten kilometers gives one lots of opportunities; sang Italian songs, ate candy from Germany, chatted with a lovely woman from Pakistan how she got there (her country paid for two representatives to attend.) I also got to walk and talk with one of the descendants of Henri Dunant. As we walked we were cheered on by many of the local residents. Following the actions of another ARC team member, I started giving out my last few pins to the children who were standing on the sides of the road. Such small items yielded such big smiles, just amazing. They spoke no English, I spoke no Italian, but we were able to communicate. It truly lived up to the phrase One Red Cross.”

“The most memorable moment was the Fiaccolata itself. Walking with colleagues, here with Vivian Moy, and Red Crossers from around the world – all the national societies and Red Cross or Red Crescent emblems, including relatives of the founders Henry Dunant and Louis Appia from Geneva, it was really breathtaking. Winding through farmland, and up and down hills connecting the battlefield and church that became a makeshift hospital. To imagine what it was and appreciate all that it has become.” 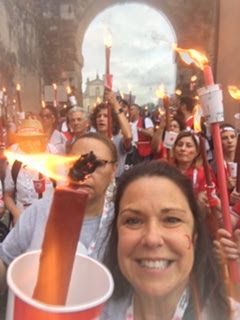 “Solferino is a moment to be experienced. It carries you. It pushes you past beliefs and renews hope. It reminds us that we are one Red Cross and that our work around the world holds the promise that together, and only together, can we can be successful when we walk shoulder to shoulder.”

“I would say the Fiaccolata. I think seeing all the people from all the different countries, everywhere you looked you would see someone from another country’s Red Cross and one of my colleagues described it as like a mini UN and I think that was a really good description of it because there’s just so many people from every country and some that I’d never even heard of. So, I thought that was really special. The people of the town of Solferino were really nice and welcoming. During the march they were all sitting outside on their balconies and on their porches and they would say hello to us and they were cheering for us while we were walking so that was really cool.” 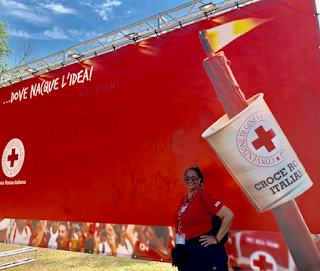 “My most important experience was staying at a villa. It was in the middle of a wine country and in the backyard, it had this great vineyard. It was really interesting because they made it's own wine and cheese. I wanted to see Italy in its original form not in the modern-day hotels. Then I found out it was one of the homes that Henry Dunant stayed at when he was making his tour during the battle. It was really cool because there were other Red Crossers there. The house was well kept but it had that original feel. I met someone from Greece and people who came in from other parts of Italy, but I was the only there from the American Red Cross.”

Posted by nyredcross at 2:33 PM No comments:

Over the last 7 days, the Greater New York Red Cross provided emergency assistance to 95 adults and 30 children following 24 local disasters. Here are some highlights from last week and a preview of upcoming activities (see below).

Posted by nyredcross at 2:36 PM No comments:

Over the last 7 days, the Greater New York Red Cross provided emergency assistance to 215 adults and 104 children following 44 local disasters. Here are some highlights from last week and a preview of upcoming activities (see below).

In Case You Missed It - August 6


Over the last 7 days, the Greater New York Red Cross provided emergency assistance to 237 adults and 79 children following 53 local disasters. Here are some highlights from last week and a preview of upcoming activities (see below).

Today, the Reception Center at the Family School has transitioned into a Service Center where Red Cross, NYC agencies and other community organizations are meeting one-on-one with families affected by both fires to provide additional assistance including supporting longer-term needs.

Posted by nyredcross at 1:53 PM No comments: