During the last 7 days, the Greater New York Red Cross has responded to 46 emergencies and provided aid to 102 adults and 40 children. Here are some highlights from the last week: 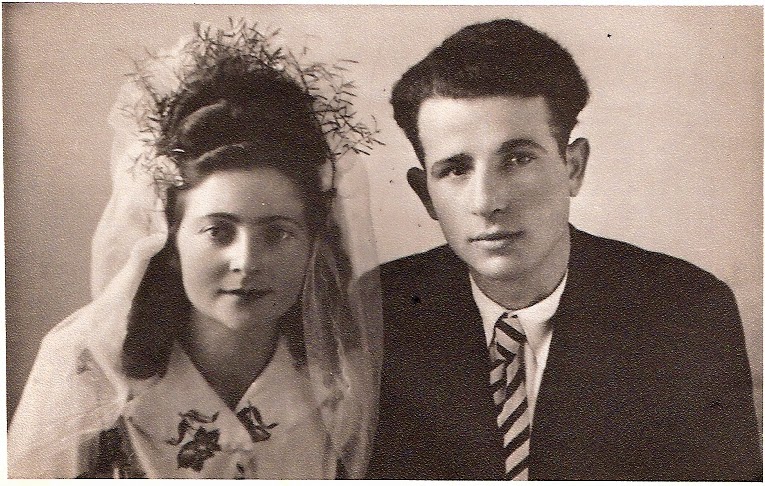 Posted by nyredcross at 11:35 AM No comments:

Last weekend, the Queens Recovery Coalition--a group of local organizations, community leaders and recovery workers volunteering to support communities after Superstorm Sandy--canvassed homes in Hamilton Beach, Queens. Throughout the two-day period, individuals representing several Sandy recovery organizations went door-to-door to inform residents about Sandy recovery assistance still available more than two years after the storm. The American Red Cross has been part of the Coalition since its inception and had volunteers take part in the canvassing.

As a result of these efforts, more than 400 homes were visited during the two-day outreach and more than 250 new families registered with a disaster case manager. The canvassing also enabled the Coalition to collect data on recovery efforts to date and to identify existing unmet needs.

Recovery partners also involved in the Queens Recovery Coalition and the recent canvassing include, Catholic Charities, United Methodist Committee on Relief, the Salvation Army, CAMBA, After Hours Project, Mental Health Association of New York, and Neighborhood Housing Services of Jamaica. The outreach was also promoted to the community through the offices of  local elected officials, the New Hamilton Beach Civic Association (and its president Roger Gendron), and Queens Community Board #10. On-site support was provided to the volunteers by the West Hamilton Beach Volunteer Fire & Ambulance Corps.

Posted by nyredcross at 5:02 PM No comments: 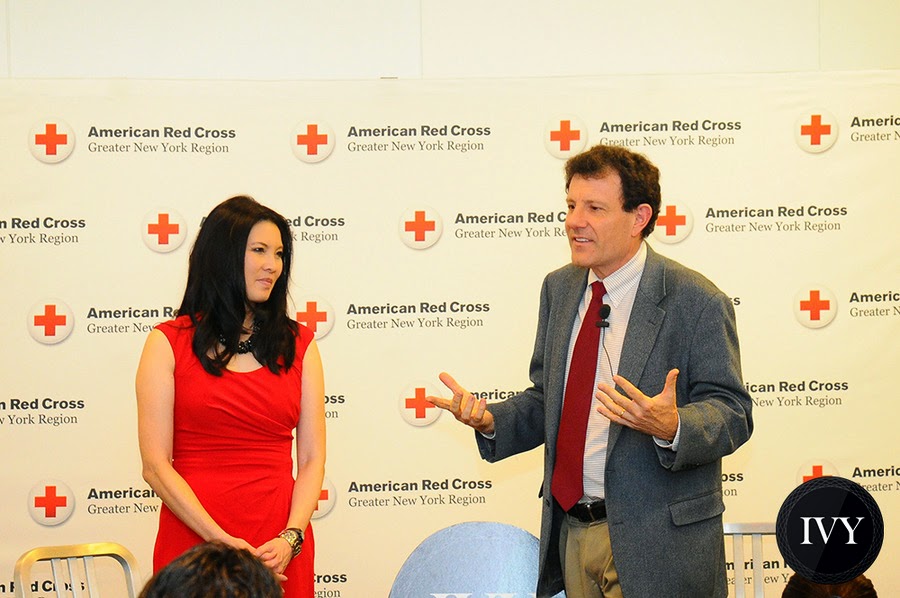 On Tuesday, November 11, 2014, the Greater NY Red Cross Young Professionals Council partnered with Ivy Connect, a national social networking group for young professionals, to host an inspiring evening featuring world-renowned humanitarians (and writers) Nicholas Kristof and Sheryl WuDunn. During the event, more than 200 guests, comprised of Ivy Connect members and Red Cross supporters, gathered in our Hell’s Kitchen Headquarters to hear the Pulitzer Prize-winners speak about “Art & Science of Giving.” This conversation offered Kristoff and WuDunn’s unique perspective on overcoming inequality by becoming more effective global citizens. They referenced their new book, A Path Appears, Transforming Lives, Creating Opportunity, which outlines ways to capitalize on our skills, time and money to make a more powerful impact on communities in need.

To learn more about the Young Professionals Council, a dynamic new group of Red Cross supporters, and how you can join, click here.

More pictures from the event can be seen here.
Posted by nyredcross at 11:48 AM 1 comment:

Two Red Cross volunteers talked about their motivation for being part of this annual event.

Paul Allwright: “I am a veteran of the British Army. My Son, Brendan, is an airplane mechanic in the Marine Corps, stationed in North Carolina. I am here today because it is great to support our veterans, and it’s also my birthday. This is a great way to celebrate!”

Maria Millan: “I grew up in a military family and am a Blue Star Mother. My daughter, Kiara, is a Combat Medic. My father was in the Army and served in Vietnam. I always volunteer on Veteran’s Day because if I can’t be with my daughter, why not be here to support other veterans and members of the military.” 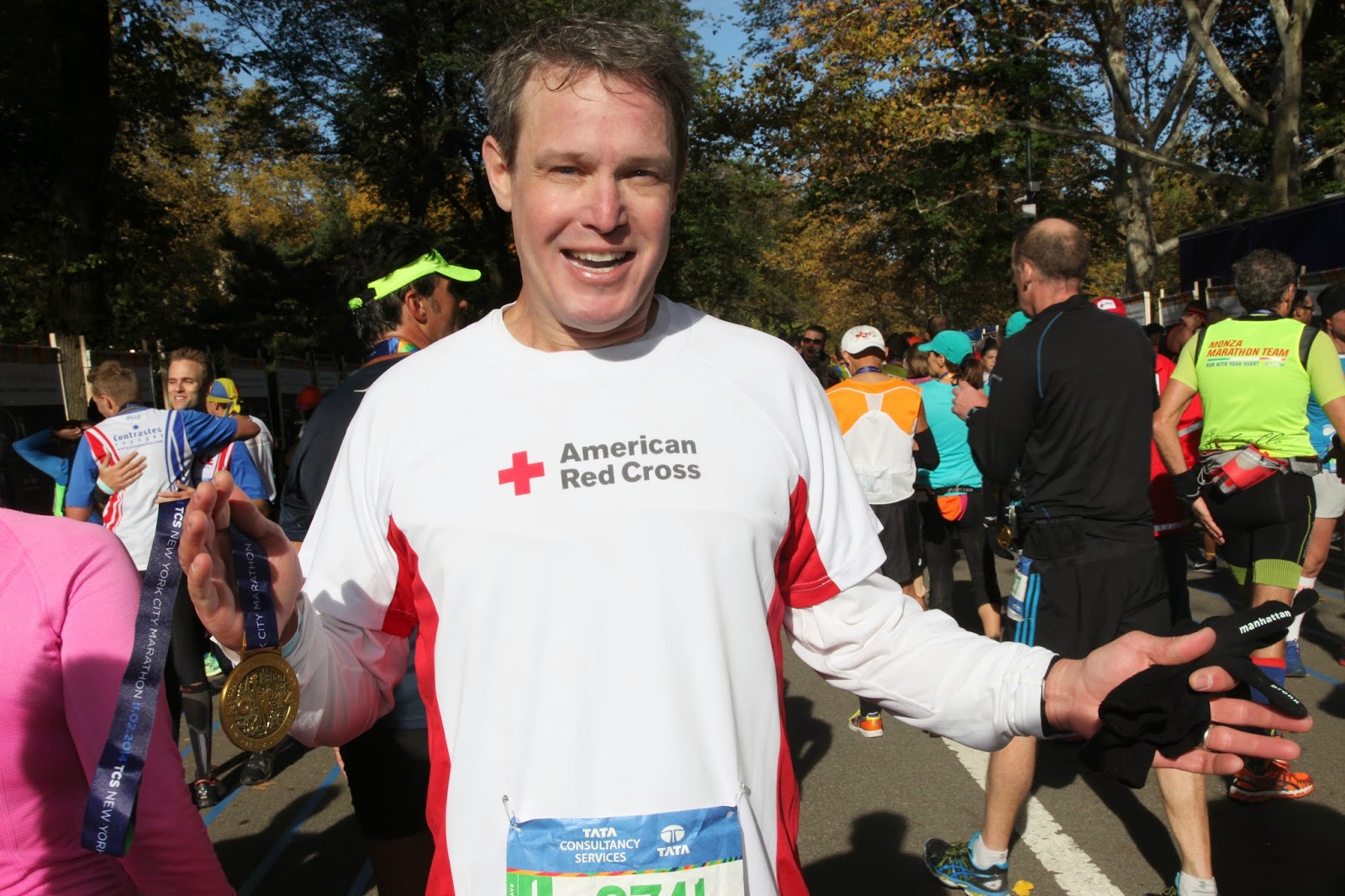 On Sunday, Nov. 2, a brilliantly clear, cold and windy day, Mark Shelton, a member of the Greater New York Red Cross Board of Directors, ran the TCS New York City Marathon, along with a team of 14 Team Red Cross runners.

Every member of Team Red Cross, which included runners from New York City, Florida, Missouri, Louisiana, and even Hong Kong, ran the 26.2 mile race as a Red Cross ambassador, one who  pledged to raise or donate funds in support of the Red Cross’s vital lifesaving mission of helping people prevent, prepare for and respond to emergencies. The total raised thus far is nearly $90,000.

“I’m really excited about the opportunities for people to get to know and get involved with the Red Cross through the Marathon,” Shelton said. “And of course, to help raise funds for its crucial humanitarian work.”

An attorney for the firm of Gibson and Dunn, Shelton, a board member since 2005, has run marathons since 2011, including the Boston Marathon in 2012. Shelton added taht he is inspired by the work the Red Cross does to make the lives of New Yorkers better; from Sandy relief to aid provided after smaller, “everyday” disasters like fires and floods.

On Sept. 17, 2014 a massive 3-alarm fire raged through a Second Avenue apartment building in Midtown Manhattan. More than 140 firefighters were on hand to quench the blaze. Five Red Cross workers responded to help those affected, including Alexis Schroeder and her roommate.

For Alexis, this was just one more complication in an already complicated life.

She and her roommate, a friend from high school, had moved into their Midtown Manhattan apartment just four weeks earlier. Soon after the move, Alexis was struck by a taxi while jogging after work.

Since then, she’d been on leave from her job, juggling doctor’s appointments to treat a bulging disc in her back. As her pain subsided Alexis was looking forward to returning to her work in marketing in mid-October.

The day of the fire, Alexis was walking home from her bank after clearing up some suspicious activity on a credit card. When she got to her street, she smelled smoke, then saw it billowing from her apartment window. Gripped by fear, Alexis relaxed only when she saw firefighters pull her roommate to safety through the dense black cloud.

The women watched as flames consumed their building. The fire left six apartments unlivable, with the top apartments severely damaged by smoke.

That evening a NYC firefighter and Red Cross volunteer Paul Allwright escorted Alexis and Colleen back to their apartment to retrieve anything they could salvage, especially documents and prescriptions.

Sadly, the apartment was unrecognizable. “There were no floors,” Alexis said. “My bedroom … everything was destroyed. My roommate's room was destroyed as well.”

The women were devastated by the sight and overwhelmed, not knowing where to begin. Paul guided them through those first few hours of shock and numbness.

“We weren't able to think about anything, about what to grab,” Alexis said. “I didn't have any money with me with my whole credit card situation. The Red Cross was there with things you don't even realize you need.”

Paul arranged temporary housing for the women for the days immediately after the fire and provided them with emergency funds for food, and so they could replace some clothing.  And he let them know the Red Cross would continue to be there for them in the days that followed; that they were not alone. He explained that Lilliam, their Red Cross caseworker, would continue to support them in numerous ways.

In the months since the fire, the women continue to rebuild their lives. For now they are staying with friends in the city on weekdays and with their families in New Jersey on weekends.

“The Red Cross generously helped us out,” Alexis said. “We really didn't know what type of help was provided by the Red Cross. We couldn't say nicer things about it.”

Posted by nyredcross at 10:36 AM No comments: