"Working with the Red Cross has given me more empathy and more understanding." 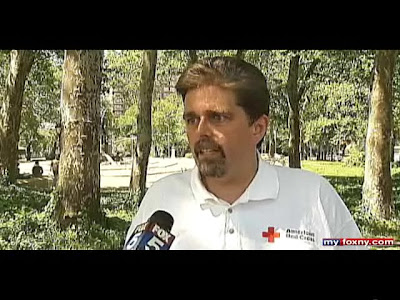 When the first plane hit the World Trade Center on 9/11, Bob McGrath was working with a colleague at a small PR firm in downtown Manhattan. From one of their offices they could see the smoke, but not the buildings themselves. The TV in their offices was tuned to CNBC, and all too soon, they understood the gravity of the situation.

Like many New Yorkers, Bob urgently wanted to be able to help in some way. He called one of his firm’s clients, St. Clare’s Hospital and Health Center on West 51st Street in Manhattan. Did they need help with public affairs? They did, and, by 11:30 am, Bob was at St. Clare’s, which was set up as an overflow for triage from the World Trade Center. He spent the next two days carrying out the public information function for the hospital, speaking with the media and with family members searching for loved ones who had been at the Trade Center the morning of 9/11.

Bob, who had been a member of the Red Cross marketing advisory council since 1998, then received a call from American Red Cross in Greater New York’s Chief Information Officer, Mark Edelman. The Chapter’s public affairs staff had been working 24/7 handling media inquires, and Mark needed another person on board. Since there was less for Bob to do at St. Clare’s because of the small number of casualties, he came to the NY Red Cross on Friday.

Bob divided his time at the Red Cross between its headquarters (then located on Amsterdam Avenue and West 66th Street), a Red Cross tent set up on the West Side Highway just north of the World Trade Center, and the City’s Family Assistance Center near the Chelsea Piers. He responded to media inquiries and arranged for interviews with Red Cross personnel and others. At the Family Assistance Center he worked with the general public, explaining where they could get further help.

The following Monday, when Wall Street reopened for business, Bob played an important role in helping the Red Cross staff to navigate police checkpoints in order to set up aid stations in lower Manhattan. That day, Red Cross mental-health staff from across the country greeted and provided support to commuters throughout the Financial District. “They didn’t know the city, they didn’t know all the accents, but they knew how to give people support,” said Bob. “When people came out of the subways they saw Red Cross folks with water and pamphlets, literally ready to hug and to talk.”

Working with the Red Cross after 9/11 spurred Bob to become more involved with the Greater NY Red Cross. Nine years later, he is one of the Chapter’s most active public affairs volunteers. “I felt blessed to be a part of the NY Red Cross on September 11th,” said Bob. “This organization has helped thousands of people get on the road to recovery in the aftermath of unimaginable devastation, loss and pain, and my volunteer work with the Red Cross has made me a stronger, more patient, more empathic New Yorker.”