We love you guys. 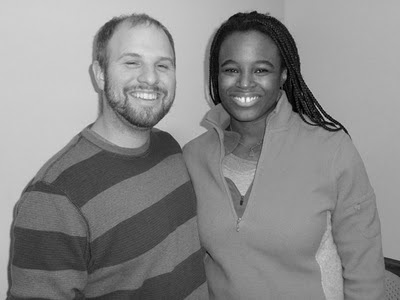 The night after the Blizzard of 2010, Frank Favilla and his wife Aabye-Gayle heard a commotion outside their apartment and realized their building on Judge Street in Queens was on fire. They fled, wearing just sneakers, pajamas and overcoats, then watched for almost an hour in the frigid cold as a 5-alarm blaze ripped through the building. Although their unit was not burnt, it suffered enormous damage as firefighters broke windows and walls in order to reach the burning apartment above them.

The next day, the couple, who had spent the night at the home of a family member, followed the advice of an uncle of Frank’s who has worked for the Red Cross—they returned to their apartment and registered with the organization. “My uncle said we could get our immediate needs for food, clothing and possibly shelter met,” said Frank. “And that if we had any questions, we could ask the Red Cross.”

In fact, Frank and Aabye-Gayle had many questions, among them, “What help is available?” “Whom should we call?” “Where should we go?” and “What documentation must we bring with us?”

“Our caseworker told us what next steps to take and who to speak to,” said Aabye-Gayle. “And that anyone who had questions should call her and she would speak on our behalf.” The couple, who received emergency funds for food, said they were very pleased with the Red Cross.

“We love you guys,” said Aabye-Gayle, who trained at the Red Cross in CPR and AED this past summer. “I didn’t know what specific crises you guys addressed, but that you help when people are displaced.” Frank added, “It’s comforting to know that there’s not a question we can’t ask when we need help.”
Posted by nyredcross at 5:26 PM

Email ThisBlogThis!Share to TwitterShare to FacebookShare to Pinterest
Labels: Down the Street, Queens