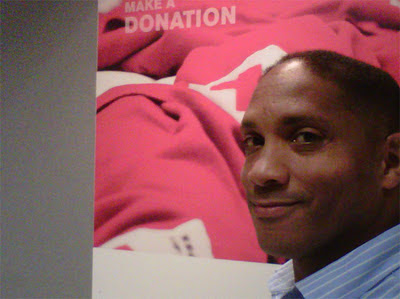 I have been a Red Cross employee for about sixteen years, serving primarily as a community affairs agent for the Atlanta Chapter. From 1994 until 2003 I was a Red Cross Community CPR instructor, teaching others how to manage choking, breathing and cardiac emergencies. In short, I wasn’t one of those people who needed to be convinced that CPR training was effective; I lived it for a good part of my Red Cross life.

Fast forward to August 2011 when my family—yours truly, wife Donna, 18-year-old daughter Ashley and 14-year-old son Chris—were dining in a southwest Atlanta steakhouse. This particular outing was no different than any other. We were eating our meals and engaged in light conversation when it happened. My son Chris grabbed his throat, stood up and started to gasp. The look in his eyes could best be described as a death glare: eyes wide open, fixed and looking straight ahead as if he were gazing at the Grim Reaper, black cloak, boney fingers, sickle and all. At that moment time stopped, and other restaurant patrons faded into the background.

Chris continued to grab his throat and everyone, and I mean everyone, in the restaurant looked on, but oddly, no one moved to help. I then remember whizzing past my wife—she says that I knocked her out of the way—picking Chris up and applying abdominal thrusts for conscious choking victims. After two or three thrusts, the steak came out, Chris started to cough and I came back down to earth. Everyone looked on nervously but happy that they’d just witnessed a life-saving event. Chris thanked me, hugged me, kissed me and said, “Dad, you saved my life.”

The American Academy of Pediatrics estimates that "Choking on food causes the death of approximately one child every five days in the United States. Hot dogs accounted for 17 percent of food-related asphyxiations among children younger than 10 years of age. . . ." (The Washington Post, February 22, 2010). I thank my lucky stars that Chris didn’t become part of that number.

So the moral of my story is that everyone should make time to learn CPR. The life you save may be the life of someone near and dear. I love my family more than life itself and I’m glad that I knew what to do.

Ruben Brown is the media relations specialist for the Atlanta Red Cross
Posted by nyredcross at 10:38 AM

Email ThisBlogThis!Share to TwitterShare to FacebookShare to Pinterest
Labels: Across the Country, Atlanta, CPR