“The water was coming down like a heavy downpour" 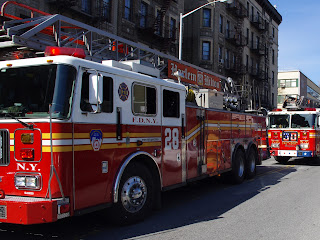 Blackened walls and ceilings, scorched by flames and acrid smoke. These are the images that first come to mind when we think of the damage caused by a house fire.

Certainly this is a scene familiar to Greater New York Red Cross disaster responders, who are required to enter an apartment post-fire and conduct an evaluation in order to provide affected residents with assistance.

However, it is not the only consequence we see. Neighboring apartments to the source of the fire, especially those below, are often severely affected by another issue - water damage. House fires burn fiercely, and firefighters must use a significant amount of water to not only put out the fire, but to reduce the temperature of the embers so there is no risk of them re-igniting.

As the water drains away, it gradually seeps through the floorboards or damaged walls into surrounding apartments, often with disastrous results.

Red Cross responders regularly assist families whose apartments have been made uninhabitable due to water damage following a house fire. On September 17th Shonta Simpson and her family experienced just this scenario when an apartment in their five-story Brooklyn building caught fire.

Shonta, 28 years old, was at home when she first smelled smoke. She went outside to investigate and less than two minutes later saw the floor above her burst into flames. Fearing the whole building might be destroyed, she began to cry.

"We just re-did our home,” she said. "We invested so much time and energy, everything, into rebuilding our home, for it to be taken from us."

It took almost an hour for the fire to be fully extinguished, and when Shonta was able to access her room again she was confronted by a devastating scene. The ceiling had collapsed onto her bed, and water was running down into her apartment. She felt the urge to grab an umbrella.

"The water was coming down like a heavy downpour," she said. "It was so bad, just coming out of the light socket itself. Besides the smell, it hurt me to see that everything you worked so hard for is damaged."

Shonta met the Red Cross team when she re-emerged from her ruined apartment. The team made an assessment of the apartment and offered their sympathy and support to Shonta. The Red Cross was able to offer temporary accommodation and financial assistance to the family. "I'm just grateful," she says. "Grateful that they were there to talk to me and help me understand what just happened."

Shonta lives with her younger brother Kaseem and her mother Cheryl, who uses a wheelchair. Fortunately neither Kaseem nor Cheryl were at home when the fire occurred, but it was important to consider Cheryl’s requirements when finding accommodation for the family.

"The Red Cross provided her with a handicapped room, which was great," recalls Shonta. "She's not really mobile, she can't walk, she can't do a lot of things by herself. And I'm in the room next to her."
Cheryl's humor and positive attitude has helped Shonta through this difficult period. "We've got each other," Cheryl says. "Everything else, we can buy it back."

People never expect to be affected by a house fire. And they never anticipate needing help. But the Greater New York Red Cross performs a crucial role supporting individuals and families that are made homeless by a house fire.

As Shonta said, "We look at ourselves like we're good for the most part. We're not destitute. We're a well-put-together family. And the fact that you guys even helped us is a beautiful feeling."