Red Cross was prompt and friendly. 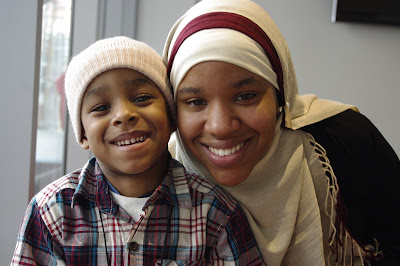 When fire began spreading through Marjorie Farrell’s fourth floor Brooklyn apartment on the bitterly cold night of Feb. 20, the young couple’s first reaction was to warn their neighbors.

“We ran from apartment to apartment telling people,” Farrell said. “Luckily, our six-year-old son, Tawfiq, was staying with relatives,” she added with relief.

They then made several attempts to put out the flames shooting up from their mattress with cups, and then buckets of water. But to no avail. Black smoke began to billow through the apartment, and they ran out.

Farrell was wearing pajamas and socks, but no shoes. A neighbor gave her a piece of cloth to wrap herself in. Her husband was brought into an ambulance and evaluated for smoke inhalation.

Farrell, who is a devout Muslim, rushed down the street to her family’s mosque, where she works and her husband teaches. She began to pray. It was 5 am; just in time for morning services.

When Farrell and her husband returned home, the American Red Cross was on hand to help.

Some of the things the Red Cross made available included a debit card with funds for food and clothing; city housing referrals, and the documentation needed to retrieve her husband’s prescriptions after his medications were lost in the fire.

“Red Cross was prompt and friendly,” she said. “I could relax for a second."

Farrell says she’s no stranger to working to assist and counsel families. On a daily basis she works at the mosque, helping other families in need put the pieces back together.

Moving forward, Farrell said she also wants to get involved in volunteering, possibly even at the Red Cross. She stresses she wants to “give back to the community and help others,” as she was helped.
Posted by nyredcross at 2:38 PM