Getting Alarmed In My Own Neighborhood

In late September, I was given the opportunity to “ride-along” with Red Cross volunteers during a disaster response shift, an experience that provided me with better insight into the values and work of the Red Cross. A month and a half later, in mid-November, I saw firsthand another part of the Red Cross mission, the #GetAlarmedNYC campaign. The event took place in the Highbridge section of the Bronx, a few blocks from where I live. The Red Cross’ goal that day was to install hundreds of free carbon monoxide and smoke alarms in area homes. Not only did the experience allow me work with many other dedicated volunteers to help save lives, but it allowed me to do so in my own community.

The event began early Saturday morning at Yankee Stadium. Bronx Council Member, Vanessa Gibson and Josh Lockwood, Regional Red Cross CEO were among some of the speakers who provided encouraging words to Red Cross volunteers. After the briefing session, we were geared up, provided with all the necessary equipment and training to head out into the community.

I was teamed up with Ashley DeLuca, an experienced and enthusiastic Red Cross volunteer who had participated in previous smoke alarm installations in the City. Throughout our 3-hour trip, we visited five different homes. Our job was not only to install free smoke alarms, but to also interact and inform residents about fire safety and prevention. In total, we were able to install seven smoke alarms. 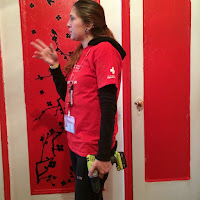 Living only a few minutes away from Highbridge, I was able to value and appreciate the commitment of Red Cross volunteers in trying to create a safer environment for families and residents in my community. About two months ago, a 4-alarm tore through an apartment building just blocks from my home, displacing nearly 60 families. The Red Cross was there then helping victims of the fire, and now they were once again back in the Bronx with an army of dedicated volunteers spreading the message of fire-safety and trying to prevent future fire tragedies from reoccurring.