Finding Care and Love After Disaster 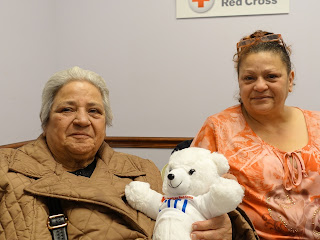 On November 30, Brooklyn resident Elsie Rodriguez was beginning her workday when she received a frantic call from her elderly mother. The apartment they lived in together was on fire. Rodriguez immediately rushed home.


When she arrived on scene, she found her mother visibly shaken but unharmed. The building’s residents had gathered at a school across the street where the Red Cross was offering assistance. Preferring to stay with family, Rodriguez and her mother declined their offer of emergency housing and stayed with her sister in Queens.

As for the state of their apartment, their home for the past 40 years, the damage was considerable.

“Nearly everything was destroyed.” Rodriguez recalled.

The next few days would be challenging. Trips to salvage belongings from the apartment and the stress over their uncertain living situation compounded their anxiety. That’s when they were reminded to follow up with the Red Cross.

On her mother’s 80th birthday, a week after the fire, they made the trip to the local Red Cross in Hell's Kitchen and met with their caseworker Lilliam Rivera-Cruz.

With tremendous compassion and reassurance, Lilliam gave them referrals to a local city agency for housing along with clear instructions on what to do next. She also provided them with a debit card to buy food, clothes and other personal items.

Another item they received was a teddy bear; this was meant as a special gesture for Rodriguez’s mother on her birthday. It was this gift that brought a smile to their faces for the first time since the fire.

Seeing her mother clutch the bear, Rodriguez remarked, “Lilliam, is like a family member. The way she conducts herself with caring and love; it really touches us. When she came to my mom, her heart just poured into us, and that’s what you need in a time like this.”

That small teddy bear meant more to the two women than Lilliam could have imagined; it served as a reminder that they were not alone.

Before leaving the Red Cross, Rodriguez spoke of the impact of loosing everything to a fire, “You feel hopeless you don’t know what to do. But today there’s hope.”
Posted by nyredcross at 11:56 AM