A Visit From the President of the Swedish Red Cross


As part of a recent visit to the United States, Anna Carlstedt, President of the Swedish Red Cross used the trip as an opportunity to connect with her American Red Cross colleagues in New York and Washington D.C. During her time in New York, she was fortunate enough to witness the Empire State Building lighting for Red Cross Month, and we were fortunate enough to get a chance to speak with her and learn a few things about the Swedish Red Cross.

What type of role does the Red Cross play in supporting the refugees entering Sweden?
During the autumn there came several thousands of refugees each week to our main central [train] stations. We received them together with the police and the migration authorities so they felt safe when they saw our symbol coming off the train after an extremely difficult journey. They were relieved to see not only the police and the migration authorities but also the Red Cross/ Red Crescent Movement. We provided first aid water and food, together with other organizations, psych-social support and a lot of information because what we realized was that a lot of refugees after this very difficult journey coming from war in Syria, very often they were afraid of authorities, afraid to even go through the procedure of seeking asylum and we could comfort them and say, "you don't need to be afraid of the authorities in Sweden. They're going to help you out and you can feel safe."
What are some things that you would say connect Red Cross volunteers around the world?
I came back from Syria three weeks ago and when I met Red Cross volunteers there. They said even though they are working in very difficult conditions, they always feel that they can make a difference for another human being. No matter how difficult it may be, it’s never hopeless. Perhaps we cannot always help everybody, but everybody can do something. The pride a volunteer takes in helping another human being and feeling that you’re part of something global, that is very beautiful.

What are some of your impressions of the American Red Cross in Greater New York?

I’m incredibly impressed by the number of volunteers, the staff, and the emergency response and blood donation programs. I was also very impressed by what the Red Cross of Greater New York is doing every day to respond to local emergencies. It’s all part of the Red Cross Movement! Around the world, the Red Cross has the same goals, and this kind of exchange is very important for our organization. 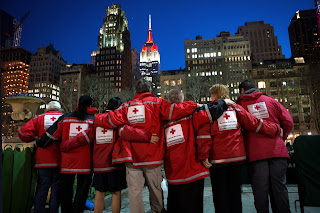 Do you have a message from Sweden to the American Red Cross of Greater New York volunteers?


Thank you for all of the great work you are doing. Being here in New York, I really feel that we are all one Red Cross/Red Crescent movement.

Posted by nyredcross at 1:57 PM