"I never ride alone. I’ve always got a group watching over me.” 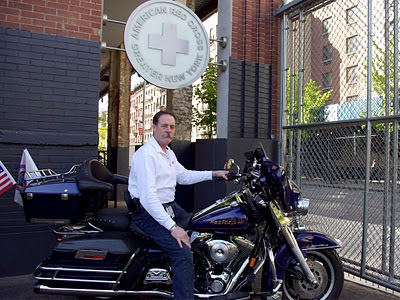 Few NY Red Cross staff members cut a more dashing figure when arriving at work than Charlie Wells on the days when he glides into the Chapter’s parking lot astride his dark purple Harley Davidson. A motorcycle rider since he was 16, Charlie has had this particular bike for the last five years. “It’s kind of like a tribute to the brothers—the firefighters and paramedics who were killed on 9/11,” he said. “I have a couple of tribute plaques on the bike in commemoration. So I never ride alone. I’ve always got a group watching over me.”

Charlie joined the NY Red Cross as Disaster Response director for New York City in January 2008 after spending 30 years with New York City’s Emergency Medical Service/New York Fire Department. His experience dealing with emergencies is long and deep. Born and bred in Queens, he worked as an EMT after high school and then joined the New York City EMS in 1977. There he rose through the ranks, responding as a paramedic captain to the 1993 bombing in the World Trade Center. In April 1995 he went to Oklahoma City as part of New York City’s Urban Search and Rescue Task Force after the terrorist bombing of the Alfred P. Murrah Federal Building left 168 people dead and close to 700 injured. That same year, in September, he deployed to the Caribbean after two hurricanes caused extensive damage to several of the islands.

On 9/11, Charlie worked downtown as a chief in charge of an EMS operation after the World Trade Center was attacked. His brother-in-law, Bobby, a FDNY lieutenant, died that morning. “That was a very life-altering change, because it turns out we were in the same building—the Marriott Hotel,” said Charlie. “I didn’t know that on 9/11.” As the South Tower began to collapse, the triage team that Charlie was leading ran toward the Marriot through a side entrance off Liberty Street. Though trapped in debris, his team managed to dig out. “When we found Bobby three months later, I realized that we had been working 50 feet away from each other.”

So directing emergency responses is nothing unusual for Charlie Wells, which was a good thing—since his first day on the job at the Red Cross involved a building vacate in Williamsburg, Brooklyn, that left some 80 unhappy people shut out of their homes. “It’s not as if I got here and got a little mentoring first, as if I walked in the door on the first day and sat at a desk for a couple of weeks learning the job,” he said. “I got thrown into it right at the very beginning.” And the large-scale responses continued with two crane collapses in Manhattan in March and May of that first year on the job.

Of course, before starting his new job, Charlie had seen the Red Cross in action “thousands of times” at fires. And, while he knew people were being helped, he never knew the details about how they were being helped. In Charlie’s position as NY Red Cross director of response for New York City, he’s back at fire scenes again. “It’s kind of brought me around full circle in my career,” he said. “As an EMS Chief, I always saw the firemen telling people, ‘stand to the side, don’t get too close, it’s too dangerous.’ Now it’s ‘Hi, I’m Charlie Wells from the Red Cross. I’m here to help you.’ The firemen are helping you by putting the fire out. And the Red Cross is going to help you get through this after the fire is out.”


Charles Wells from Baldwin, NY
Posted by nyredcross at 12:25 PM