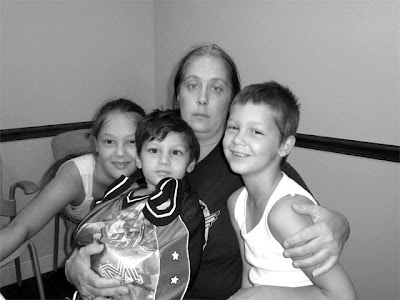 It was four in the morning when a fire broke out in the four-family house on Staten Island where Shannon Barback rented an apartment with her three children. Shannon, the kids, and her boyfriend, Nick, were awakened by two teenage girls who saw smoke as they were passing by, banged on the door and yelled, “Fire! Get out, get out!” Nick opened the bathroom door, saw flames, slammed the door shut and ran to get Shannon and the kids, pulling them down the stairs and across the street.

“The Red Cross was there really quickly,” said Shannon. “They gave us water and coffee. We had no shoes; and they gave us shoes. They told us to come to headquarters for further services. I had no idea of all the services you provide.” At the office, the Red Cross gave the family emergency funds to buy food and clothing, MetroCards and referrals for housing and for counseling for the kids.

Shannon, who just graduated from nursing school, says that she and her kids will stay at her mom’s for now. Long term, she’s planning to take the State nursing boards, get a job, make some money and get back on her feet. And she’s very grateful to the Red Cross. “You guys do a lot,” she said. “I didn’t know how much you do. I appreciate everything; you’ve been very caring.”


Shannon Barback from Staten Island
Posted by nyredcross at 11:10 AM