Donning the Red Jacket Once More: A Second Ride-Along Story 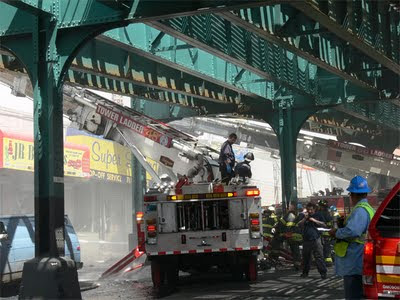 Back in February, I went on my first ride-along, accompanying Metro NY Red Cross responders to the scene of a disaster. Now, during my last week working as an intern in the Marketing & PR department, I was going out on a response for a second time.

Once again, I borrowed a friend’s work boots (so that I could safely walk through a fire scene), and prepared myself to experience another long, yet fulfilling day. Remembering my first ride-along, I knew that this second trip would be full of unexpected twists.

At the chapter’s disaster response area I met Mauricio Serrato, Senior Supervisor, Response, who gave me an unexpected, behind-the-scenes tour of the workings of the disaster relief process, something I’d not been able to see in February.

First, we visited the Emergency Communications Center (ECC), where I saw the scanners the ECC team monitors to learn about fires throughout Metro New York in order to quickly respond. And I met the ECC staff members—the people at the other end of our walkie-talkies who organize housing for clients displaced by disaster and who direct responders during their shifts.

I then met Stephen Johnson, the responder I’d be shadowing that day, and a Red Cross employee with more than four years of experience. We gathered our equipment—walkie-talkie, jacket, hard hat, etc.—and headed out in an Emergency Response Vehicle (ERV) that Stephen had already packed with supplies. 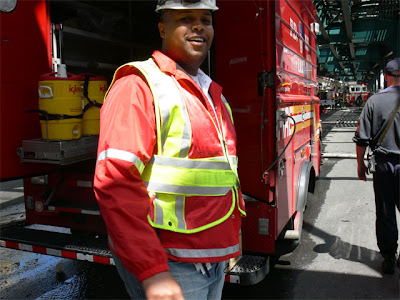 The fire we’d responded to in February was residential; this one was at a commercial building, a Laundromat. I wondered why we would respond to such a fire if there would be no residents who needed our help. Stephen explained that first responders had been battling this 4-alarm blaze nearly the entire day. They need plenty of hydration and nourishment and had run out of both. Since it’s the responsibility of the Red Cross to provide basic humanitarian assistance to first responders, as well as to New Yorkers affected by disasters, we would be providing the firefighters with beverages and snacks.

As we approached Burnside Avenue in the Bronx, it was obvious that this fire was difficult to control. We parked on a nearby street, avoiding fire trucks and crowds of people. As we got out of the ERV, I noticed the heavy stream of water flowing down the street. Spotting the fire building, we saw smoke billowing from the roof. The fire was still burning and spreading to adjacent establishments.

Firefighters were out in full force, waiting for their chance to battle the blaze. We surveyed the area and then hurried back to the ERV and unloaded our supplies—water, cases of Gatorade, and boxes of cookies and snacks. Exhausted firefighters were grateful for the opportunity to rehydrate and grab a snack. After a round of thanks, we headed back to the ERV, a job well done.

The Metro NY Red Cross is there to assist those affected by fires. The first responders fighting that fire may not be the first ones to cross your mind, but as they risk their lives for us, the least we can do is provide simple supplies that give them the most basic forms of comfort and support.
Posted by nyredcross at 2:47 PM

Email ThisBlogThis!Share to TwitterShare to FacebookShare to Pinterest
Labels: Disaster Response, Down the Street, Fires, The Bronx