They can’t all be home, but we can bring a touch of home to them 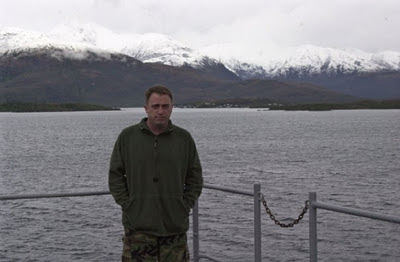 That was the rude awakening I’d endure for six months while deployed as a Marine aboard the USS Newport, in the Mediterranean Sea, from 1991-92. But one morning I didn’t mind, as it was Christmas and we were docked in Barcelona, Spain.

Despite being an ocean and a continent away from home—I couldn’t wait for liberty call. Christmas in Spain, how cool was that going to be!

Or so I thought. My platoon-mates and I walked the famed Las Ramblas. Normally packed with tourists and locals alike, the mile long hub of vendors and street performers was eerily empty. And imagine our surprise to find all of the pubs closed—at home, there always seemed to be at least one place open for business!

But alas, different country, different culture and with nothing to do, we returned to the cold comfort of our ship and the realization that you just can’t beat being home for the holidays.

I missed a lot of holidays and family events while in the Marine Corps. Even stateside, there were the times that I was stuck on guard duty; joking about what I’d do if Santa tried to get past me.

Despite the camaraderie of my fellow Marines, and our best efforts to maintain morale, it could be downright depressing at times. Yet there were two words that almost always snapped us out of any funk: “Mail call!”

It’s hard to describe what it means to get a letter from home—and quite often, at least for me, it didn’t matter who the letter was from. Somehow, mail was a validation that what I was doing was important and recognized. This was especially true when receiving letters addressed “Any Service Member,” often from kids.

Sadly the events of September 11th, and the anthrax scare that followed, put a halt to unsolicited mail for security concerns. So when I found myself at sea on the USS Portland in 2002, any mail was restricted to family and friends. I was in Public Affairs at this point, so I constantly had to explain the policy and head off all the false emails about sending cards to places like Walter Reed Army Hospital, knowing that they would just be discarded.

Fast forward to 2007, my boots and utilities traded in for a Red Cross vest. The holidays were approaching and my chapter was getting calls from organizations and schools looking to send cards to the troops. I hated rehashing the policy but then it happened—an announcement was made about Holiday Mail for Heroes!

Now in its fifth year, Holiday Mail for Heroes is a joint effort between the American Red Cross and Pitney Bowes to enable all Americans to send greeting cards during the holiday season to members of our U.S. Armed Forces, veterans and their families—many of whom will be far away from home and serving in harm’s way.

The cards are initially sent to Pitney Bowes which has the means to screen them for hazardous materials. The Red Cross then mobilizes hundreds of volunteers to sort and box cards for delivery.

Knowing firsthand what it means to be far from home, I hope all of you can join in this effort. Please visit www.redcross.org/holidaymail to read the guidelines, and then mail your cards by Dec. 9th to:

Additional ways to become involved with the campaign include connecting with fellow card senders through Facebook at www.facebook.com/redcross and Twitter at www.twitter.com/redcross using the hashtag #holidaymail.

Now, I’m betting the words “reveille, reveille, reveille” are just as unwelcomed in the military ranks as ever and there is nothing we can do about that; however, through Holiday Mail for Heroes, let’s heave to and make mail call better than ever!

Sam Kille is the Regional Director of Communications for the American Red Cross in Greater New York. He served in the Marine Corps from 1990 to 2003.
Posted by nyredcross at 3:25 PM

Email ThisBlogThis!Share to TwitterShare to FacebookShare to Pinterest
Labels: Across the Country, Down the Street, Service to the Armed Forces