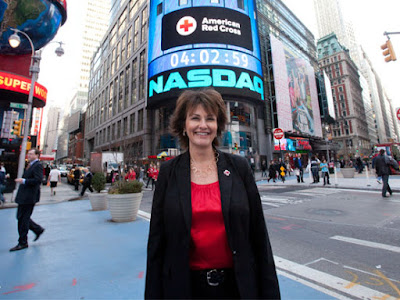 Dianne Auger, pictured above, served as Interim CEO of the American Red Cross Greater New York Region between October 2011 and May 2012.

One of the first responses I was called to when I began as a staff member with the Red Cross will always be the moment I realized the important impact the Red Cross makes when people’s lives are turned upside down by disasters—not just the big ones that make the news, but the “everyday” disasters like home fires.

I was part of a team to deploy to a three-family house fire in the middle of a workday afternoon. It was about 3 p.m. when we left our chapter to go to the scene. Normally, we would arrive to fire engines and firefighters working to combat the fire. We pulled up to the address for the fire and no fire trucks were there. We found half of a three-family house left—the top floor was almost gone. On the front porch were about 25 people, from babies to grandparents, just sitting there, waiting.

We walked up to the group. One of them said, “The fire department left to go to another fire. They told us to wait here; that the Red Cross was coming to help.”

Our team worked for the next few hours to make sure these families had a place to stay, money to purchase clothing, food and baby supplies, and the emotional support they needed.

I recall one of the moms coming home from work and seeing her home devastated. She was so calm and collected—I marveled at her grace under pressure and how she handled this terrible disaster. She knew she needed to take care of her family and that the time for her to cry would be later, once everyone else was settled.

As we drove away from the scene, I reflected back on the families sitting there, waiting for us to show up. I wondered, “What if the Red Cross didn’t show up? Where would they go? Who would make sure they had what they needed when they had just lost their home and possessions?”

That’s when it hit me—the Red Cross has to show up, and to do that, we need to enlist the support of everyone in the communities we serve to help. Whether through volunteering for the Red Cross, or making a financial contribution, or donating blood—or all three!—everyone can help the Red Cross show up for people who need it—when help can’t wait.

That’s why I’m honored to have been a Red Crosser for the last 19 years. As I leave our staff ranks and become a volunteer once again, I am making a donation to the “Help Can’t Wait” campaign and encouraging others to join me. I’ve seen firsthand why it’s critical that the Red Cross show up—time and time again—and I want to help ensure that now and in the future, no family ever has to face a disaster alone.
Posted by nyredcross at 10:33 AM