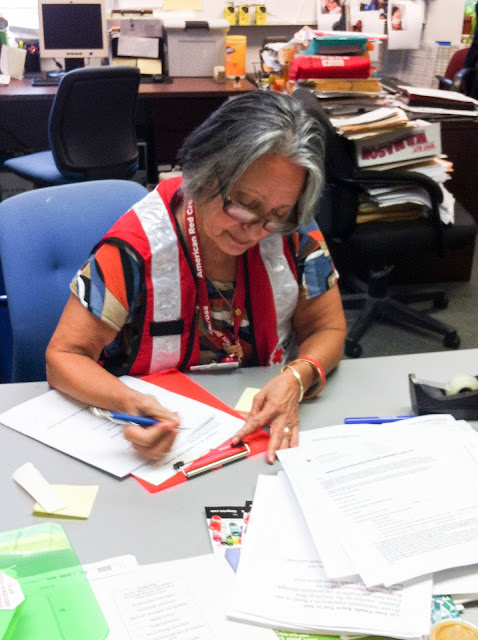 New Rochelle resident and 20-year American Red Cross volunteer Ana Torres deployed to the Gulf Coast last week as part of the Red Cross relief effort for Hurricane Isaac. We chatted with her just before she left.

Tell us about your deployment.
I’m gonna be traveling to Meridian and then to headquarters in Harrisburg, Mississippi.

So you’ll be in Harrisburg.
Usually you go to a Red Cross disaster “headquarters” and from there they send you to the different places where they have need. If I’m needed in New Orleans I’ll be sent to New Orleans. Until I get to Harrisburg, I won’t know where I’m going to be working.

Describe your role.
I’ll be doing casework—interviewing the people that are affected by the storm. We find out what they lost and help them with their immediate needs. (On other deployments, Torres worked at a shelter and served food.)

You know, you just sit down and talk to the people because it’s hard for them. And you try to console them, tell them it’s not the end; that we’re here to help them.

I’m bilingual so if there’s anybody that speaks Spanish I’ll be able to take care of them. I’ve done that in a lot of the places that I’ve been to. I’m able to give a little bit more help.

Is it easy to just leave home for a deployment?
I don’t work, so I’m able to. My husband doesn’t mind me going, sharing myself. I feel like I’m a better person being able to share myself with others.

What kind of things do you pack for a disaster deployment?
The first time you take a lot of stuff but now I don't take so much, especially if there’s a store and I can buy whatever’s necessary. But I have special tops I can wash by hand if I don’t find a place to do the laundry. You have things you take that you know you can use if it’s very hot or cold. And shoes to walk in the mud, if there’s mud.

You deployed for Hurricane Katrina. What does it feel like going back to almost the same area?
Hopefully I will find that there’s not as much damage as when I went for Katrina. But there’s always something. I don’t think this time it’s going to be as devastating as it was for Katrina. And hopefully it’s not the same people that got hit last time.

How long are you deploying for this time?
It might be just a week. They don’t want the volunteers to overdo it. The Red Cross is very good—they take care of you. They don’t want you to burn out.

Why do you volunteer with the Red Cross?
I want to share all the good things that I’ve been given. I’m able to give some of myself, to other people. It makes me feel good, especially when people thank you for helping.
Posted by nyredcross at 11:29 AM

Email ThisBlogThis!Share to TwitterShare to FacebookShare to Pinterest
Labels: Disaster Response, Down the Street, Hurricane Isaac