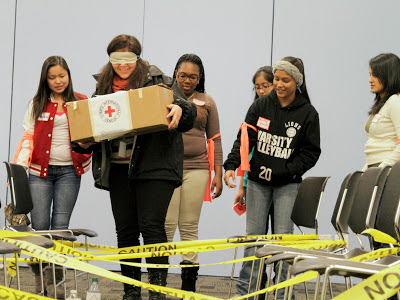 The simulation included six scenarios that placed students into roles as prisoners of war, humanitarian aid workers, soldiers and army generals. The program is designed to teach students the rules of war through representative experiences.

“This Red Cross training for ages 13 to 18 is an exciting way to teach students the importance of International Humanitarian Law. Going into the training, the youth don’t know what to expect and are literally thrown into scenario after scenario, encouraging them to put themselves in other’s shoes,” said Amanda Crabbe, Greater New York volunteer and youth services associate.
.
The students who participated will in turn recruit a group of six to 10 of their peers, facilitate the same simulation, then work together to come up with an IHL action campaign by April, 2013.

“The action campaign will address one or more issues related to IHL in an effort to spread awareness about the rules of war, and to stimulate deeper discussions among their peers,” said Crabbe.

Email ThisBlogThis!Share to TwitterShare to FacebookShare to Pinterest
Labels: Down the Street, IHL, Youth Volunteers