Tell Me About Your Day 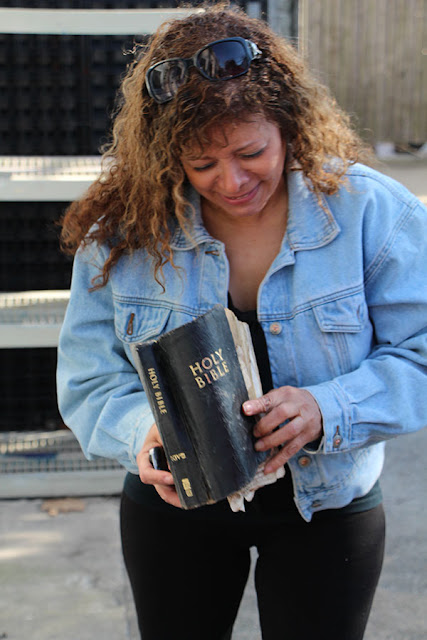 I’m sometimes asked what a typical day at the American Red Cross is like, often I’ll jest about the countless meetings and mind-numbing conference calls that dominate a lot of my time. Granted, there is a lot of planning that must go into disaster response but I do hate being chained to a desk.

Yet there are the days, like today, that reinforce why the Red Cross mission is so important.

My morning started in Island Park, a small village on Long Island’s south shore that was swallowed by Superstorm Sandy’s storm surge. There, I met with Carmen Torres who literally swam for her life when the storm hit.

Five months after, she and her boyfriend are still struggling to move past the disaster; however, their toil has been eased thanks to the Red Cross which helped provide the means for them to move into a new apartment.

Inspired, Carmen has started the process to become a Red Cross volunteer. New York’s ABC news affiliate, Eyewitness News 7, was interested in hearing her story—just one example of the more than 1,100 New Yorkers who have signed on as permanent volunteers since the storm.

Carmen walked us through her old apartment. The mold on the walls clearly showed how high the water rose. There was broken glass all over, and tattered photos—even a water-logged Bible.

It wasn’t easy for Carmen to be there and she nearly broke down in tears as she told the reporter her story. Yet every time she mentioned the Red Cross, her eyes lit up and one could truly feel the hope she described.

From there, we went to see her new apartment and its furnishings. The Red Cross had provided funds for the first month’s rent, security deposit, and furniture. It was definitely rewarding to see the donated dollar at work.

We then agreed to meet the news crew at the Long Island Red Cross office in Mineola. There, Carmen would get a tour and learn more about the process to become a volunteer.

Yet on the way, Carmen and I came upon a three-car collision in Garden City. I hoped it wouldn’t cost us the rest of the interview; however, I was compelled to stop and assist.

There was a woman holding a small towel to her mouth, I asked to look and saw that she had bitten her tongue and it was bleeding. Yet what concerned me most was the pain she was feeling across her chest, likely due to her seatbelt. Plus, I could see that she was starting to shake and looked pale—signs of shock.

I was fortunate to have Carmen with me as there was a language barrier—I really should have taken Spanish in high school. We helped the woman to the ground and let her know she would be okay. I told her daughter to reassure her.

By then, a police officer arrived and I let him know that he had at least one person who would need medical treatment. I returned to find that the daughter was stroking her own arm and was starting to shake as well. I asked if she was okay and she said her arm was starting to hurt. It did look as if it was slightly swollen. I had her sit down and keep the arm immobilized and elevated.

When the ambulance arrived, I asked the responders if they needed anything else, and they cleared me to go.

Fortunately, Eyewitness News was able to wait for us to finish the story, and Carmen was more than excited to meet the local Red Cross team, which she’ll soon be a member. It was a great day for Carmen.

And for me, it was a day away from the office that served as a reminder that the American Red Cross helps people get through life’s emergencies every day—big and small—and one never knows what kind of day it will be.

So, tell me about your day …

Posted by nyredcross at 4:43 PM