“There Are People There to Help You” 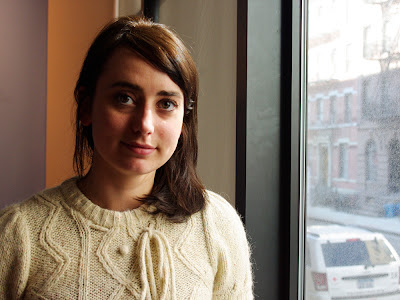 Although Kira Davies and her boyfriend, Tim Race, didn’t connect immediately with the American Red Cross after their Brooklyn apartment was destroyed by an electrical fire, once they did, they felt they were in good hands.

Davies and Race thought they’d lost everything in the fire—furniture, records, books, bed, clothes; in other words, many of the tangibles that make up everyday life. Thankfully, neither was home at the time, and they were able to salvage some meaningful items, but seeing a decade of New York living going up in flames was as surreal as it was devastating.

“I pulled up in a car to see the fire department literally throwing my dresser out my window,” Davies reported. “My apartment was on fire.”

An actress and part-time sales agent, Davies had very little left with which to start over, least of all, time. Working on several projects for the theatre troupe Dangerous Ground Productions while also filling in for a departing actor took her mind off of the damage that had been done, but also prevented her from picking up the pieces.

Then, days after the fire, she and Race, who were staying with friends, returned to the apartment to see what they could salvage. They now saw that the Red Cross had left a sticker on the door of their apartment following the incident (it had been partially covered by another notice), and reached out for help.

Though she had worked for charities in the past (specifically, Children’s International), Davies had never “really thought about being the recipient of any support.”

She didn’t realize the Red Cross could help. After all, she thought, the Red Cross assisted victims of huge disasters like Hurricane Sandy. What could they do for her?

The process proved to be straightforward, easy and quick. A phone interview led to a home visit by Red Cross disaster responders. They conducted a damage assessment and, within minutes, determined that the apartment was unlivable. The assessment led to a rented hotel room (provided for by the Red Cross) and stabilized the couple’s situation.

“The Red Cross team handed Tim a debit card right there, on site,” Davies said. “We had almost run out of money…. I don’t know what we would have done if they hadn’t come.”

The debit card was to cover replacement food and clothing; the couple also received MetroCards for transit to and from Red Cross regional headquarters in Manhattan to speak with a caseworker for further assistance.

Davies said that the responders were helpful and kind, understanding of the circumstances. With their backing, Davies is in the process of moving out and on with her life.

“I would tell people that if they have a disaster, they should reach out as soon as possible, especially that first night,” she said.

The stress of everyday life had been amplified by the tragedy, but the Red Cross was there to help.

“People should know that if something awful happens that’s out of your control, there are people there to help you.”
Posted by nyredcross at 2:54 PM

Email ThisBlogThis!Share to TwitterShare to FacebookShare to Pinterest
Labels: Brooklyn, Disaster relief, Down the Street, Fires