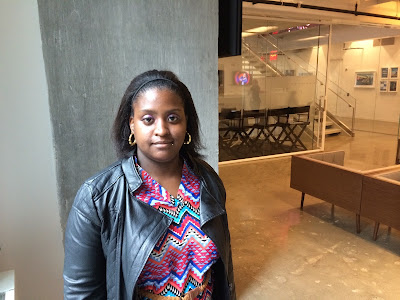 In early April, 24-year-old, Dexia Billingslea, and her family turned to the American Red Cross after a devastating apartment fire tore through their Brooklyn home. Billingslea, mother of three small children, was also the primary caretaker for three of her nieces and nephews and two of her siblings. The whole family was left homeless.

Billingslea said she first noticed the fire was coming from the children’s room when the terrified family cat went running through the back of the apartment. Alarmed, the Brooklyn native went to investigate what was causing the animal to act strangely.

Once she saw the smoke, she realized it was a fire.

“When we were running out, glass was falling on top of our heads, it was coming out the window,” said Billingslea, “So we get outside, that’s when I knew where the smoke was coming from. It was a fire.”

The fire left Billingslea and her family homeless, she didn't know where to turn.

“Thankfully, we all made it out safely,” she recalled, “but everything was destroyed inside.”

But less than an hour after the fire, a Red Cross-volunteer came to Billingslea’s side to offer help.

“She was very patient and took her time,” she said, “she stood by my side for hours.”

Along with reassurance and emotional support, the Red Cross also provided the family with a hotel room for a few nights, money for food and clothing, metro cards and help navigating the recovery process.

“She came in, she was very nice, and polite and patient,” she said. “I was trying to stay strong for the children. I didn’t want them to see me cry. She sat with me, and she stayed with me until I left.”

Billingslea also met with a Red Cross case manager after the fire, to help herself and her children get back on their feet.

“I met with a lady named Lillian, who was my case manager,” said Billingslea. “She gave me book bags, school supplies, because we didn’t have any of those things.”

Billingslea recently spoke to a group of Red Cross supporters and volunteers about the impact of their assistance and thanked them for what they do for the Red Cross.

“Thank you all! Without the Red Cross, I don’t know where we would be today.”
Posted by nyredcross at 11:48 AM