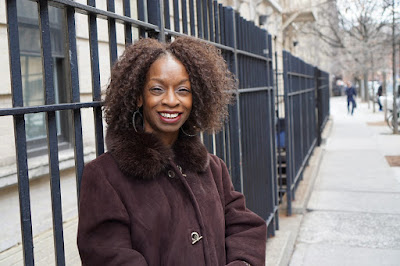 “Here is where I had some of my artwork hanging,” recalls Danese Smalls as she showed me around her home, pointing at the bare wall studs where her paintings stood before the blaze. “I’m an artist and designer, so a lot of what was in the apartment were things I had created over the years,” she said with an air of sadness, “like my paintings and my jewelry.”

Smalls was visiting her gutted apartment where two months earlier fire took everything, including countless items with deep sentimental value and her cherished cat Wisdom.

“Losing Wisdom,” she said, her voice breaking up, “was like losing a child.”

Smalls had lived in this West Harlem building for more than 20 years but on November 22, 2016 the once vibrant apartment and workspace were reduced to “black soot” and rubble. That afternoon, as Smalls returned home from doing laundry in her basement, she heard her neighbor screaming, “fire!”

“I couldn’t believe it. There were huge orange flames, from the floor to the ceiling, thick black smoke,” Smalls said. “My first reaction was that I had to get Wisdom out of there.’”

Smalls was attempting to enter her apartment to save her cat when firefighters arrived and informed her that it was not safe where she was. She was directed to a community room downstairs where she anxiously and frantically awaited news. It was shortly after learning of Wisdom’s fate that she was approached by two individuals from the Red Cross.

“I was overcome with grief; I just felt so horrible,” she remembered. “When you experience something as devastating as this you need the right people around. And they [Red Cross], were the right people. They were special people, like angels.”

The Red Cross team met and waited with Smalls for hours as she began to process the loss. They reassured and comforted her, calmly discussed the next steps, offered her a few nights at a hotel and gave her some money for basic necessities.

“The cash on the gift card was so important because I had nothing,” exclaimed Smalls. “What’s so amazing to me about the Red Cross is the compassion, the patience and the care that they provided. And I found out that they were volunteers.”

Smalls was particularly touched to know that one of the volunteers began working with the Red Cross right after 9/11.

Two months after this life-changing event, Smalls is living with a friend until she is able to return home. When I met up with her, she was checking on the status of the repairs to her apartment. She said this most recent visit reassured her.

“It’s coming together,” said Smalls with a smile as she navigated her way around power tools and sheet rock. “It’s good to see the progress.”

Smalls recognizes that she has not fully recovered, yet she makes a point to tell me about all the great people in her life who have helped her move forward.


“I’m still recovering spiritually and psychologically from the trauma but I’m surrounded by people who really love and care for me. And I still have the support from the Red Cross.”