During a year marked by unprecedented emergencies, American Red Cross volunteers from NYC, Long Island and the Lower Hudson Valley have answered the call to help around the country and right here in the Greater New York Region.

The statistics are impressive -- delivering emergency relief to approximately 8000 residents following more than 2200 disasters; installing over 27,000 smoke alarms; training over 7800 children in vital disaster preparedness skills. But numbers alone do not tell the story of all the Red Cross does to deliver hope and help in our communities.
Over the next few blogs, I will share stories from the field about the lives our Red Cross staff and volunteers have touched across the region in each line of service: Disaster Response, Home Fire Preparedness, Services to the Armed Forces, International Services, and Preparedness.Service to the Armed Forces
Clara Barton founded the American Red Cross in 1863 to provide aid and comfort to soldiers wounded in battle. Those efforts have continued to this day. In 2017, the Greater New York Red Cross chapters alone provided more than 6145 individual services to veterans. Anthony Incarnato, Regional Program Specialist, provided a few highlights for the year. 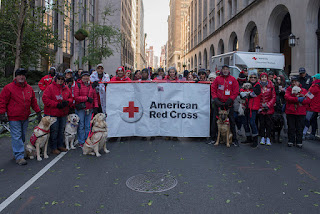 New York City Veteran’s Day Parade
The Veterans’ Day Parade took place on a chilly and windy Saturday, November 11, with more than 40 Red Cross volunteers marching and canteening. Included were five special guests -- therapy dogs who are all well known at West Point for their service to vets. The volunteers assembled at Madison Square Park where they distributed more than 1100 hot and cold beverages and 1400 snacks generously donated by JetBlue. Then the Red Crossers marched alongside dozens of veterans groups up Fifth Avenue to 57th Street to salute our nation's veterans. For more photos, please visit here. 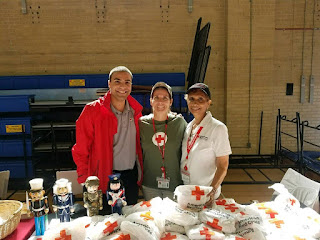 Northport VA Hospital Stand Down
On September 21, the American Red Cross participated in the annual Northport V.A. Hospital Veterans “Stand Down.” Red Cross volunteers distributed “Totes of Hope” Comfort Kits to homeless or at-risk veterans along with information regarding Red Cross services. The kits contained toiletries such as tooth paste, tooth brushes, soap, and shampoo. Veterans also received resources and referrals for assistance from other veterans agencies, including Samaritan Village, Military One Source, Iraq & Afghanistan Veterans (IAVA), and the Center for Medicare and Medicaid Services. 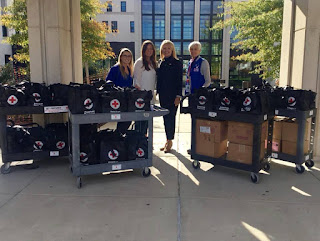 MEDEVAC Bags for Walter Reed
For the fourth year in a row, board members from the American Red Cross Metro New York North chapter assembled nearly 200 MEDEVAC Bags for patients arriving from overseas to receive care at Walter Reed National Military Medical Center. Board members put the totes together with items donated by local businesses and community members as a way to say "Thank you" to our brave military men and women serving our nation. In addition, this year the Board also donated 100 electric razors for patients who are on blood thinners and hundreds of new popular magazines. Metro New York North CEO Mary Young transported the bags to Walter Reed personally.

This is just a small glimpse into the many missions led by the Service to the Armed Forces team members across the American Red Cross Greater New York Region. When asked what he finds most satisfying about his work, Anthony said, “Since it’s inception more than 100 years ago, The Red Cross has supported our veterans. Through our local community outreach efforts and the Hero Care Call Centers, we continue to support them in every way we can. And I’m proud to say that the Red Cross to this day continues to serve those who have served us.”
---

HOW YOU CAN HELP

An average of 91 cents of every dollar the Red Cross spends goes to its programs and services, which includes providing food, shelter, relief supplies, emotional support and other assistance, as well as supporting the vehicles, warehouses, technology and people that make help possible.