During a year marked by unprecedented emergencies, American Red Cross volunteers from NYC, Long Island and the Lower Hudson Valley have answered the call to help around the country and right here in the Greater New York Region.

The statistics are impressive -- delivering emergency relief to approximately 8000 residents following more than 2200 disasters; installing over 27,000 smoke alarms; training over 7800 children in vital disaster preparedness skills. But numbers alone do not tell the story of all the Red Cross does to deliver hope and help in our communities. Over the next few blogs, I will share stories from the field about the lives our Red Cross staff and volunteers have touched across the region in each line of service: Disaster Response, Home Fire Preparedness, Services to the Armed Forces, International Services, and Preparedness.

Home Fire Campaign
In 2015, the American Red Cross in Greater New York, as part of its national Home Fire Campaign, joined forces with the FDNY, the FDNY Foundation, the Office of the NYC Mayor, the NY City Council and local businesses to launch #GetAlarmedNYC, the largest smoke alarm giveaway and installation in the nation. Its goal was to provide the free installation of 100,000 combination smoke/carbon monoxide alarms to city residents in the five boroughs that pose the greatest risk from fire according to FDNY statistics and analysis.

Since 2015, as part of this partnership, the Red Cross installed over 70,000 smoke alarms in neighborhoods known to have a history of home fires in New York City. In 2017 alone, volunteers and partner groups of the program installed 23,700 alarms in New York City and over 27,700 across the Greater New York region. 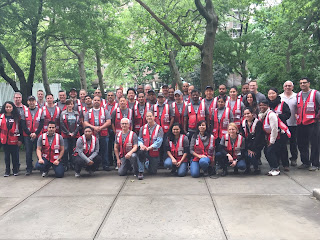 “We have several documented cases of lives saved due to this program. We know that smoke alarms save lives," said said Joe Spaccarelli, Program Director for New York’s Home Fire Campaign.

Team Effort
One of the memorable Home Fire Campaign events of 2017 was when the employees of Brown Brothers Harriman (BBH), a corporate partner and supporter of the Red Cross, teamed up with us for a day of service. They have been a tremendous partner of the Red Cross as part of our effort to help #EndHomeFires. Two years ago, during a day of service, BBH employees established an all-time record for smoke alarm installations in Greater New York that has yet to be surpassed when they installed 1000 smoke alarms in East Harlem in one day. This past May, their team returned to East Harlem and installed 510 free smoke alarms -- another record making day!
Thank you to BBH and to all of our partners for your support for this life saving program! 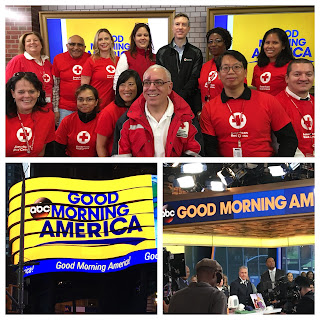 Since the launch of the Home Fire Campaign in 2014, the American Red Cross in Greater New York has installed over 80,000 smoke alarms across our region. Our work is part of a national effort, where Red Cross teams across the country are working to Sound the Alarm about home fire safety and save lives. This year, 2017, marked a milestone for the campaign: The installation of the 1 millionth smoke alarm!

In November, Red Cross team members were thrilled to join with our FDNY partners to appear on Good Morning America to celebrate this milestone and share important fire safety tips.

To learn more about the Home Fire Campaign, to sign up for a FREE smoke alarm, or to get involved to help #EndHomeFires, please visit redcross.org/NYCFireSafety