Giving Back Wherever He Can: Red Cross Volunteer Ray Enstine 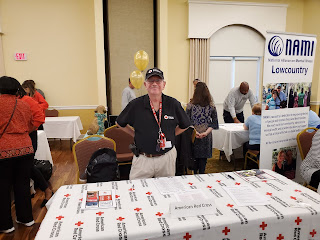 Ray Enstine lives a life dedicated to helping others. Originally from Long Island, Enstine is a military veteran who worked for 30 years as a small business owner. In 15 years of service with the Red Cross in his retirement, Enstine has served in many different roles, almost all in Disaster Relief.
Speaking about his work helping communities after fires, floods and other emergencies, Enstine reflects: “A lot of people don’t realize how meaningful it is to people when you feel in the lowest part of your life, and a stranger comes in in the middle of the night and helps you. You feel like you’re not alone, and that’s a very powerful thing.”

Enstine, who has long given back through community service including with his local Rotary Club, initially joined the Red Cross inspired by the work of volunteers after Hurricane Katrina. He connected with the organization soon after, supporting disaster response efforts locally on Long Island and, at times, deployed to large-scale relief efforts, like those that spurred him on to volunteer with the Red Cross in the first place.

One early and memorable experience for Enstine on deployment occurred while working at a service center in Iowa for flood relief in 2007. He encountered a gentleman who did not want to leave his mold-ridden home despite the safety issues he was facing. He connected and carefully engaged in conversation with the man, ultimately assisting him and his family to find housing. The man introduced Ray to his wife and expressed their gratitude after reconnecting with him by chance a few weeks later.

Enstine has also been quite active after local disasters here on Long Island. One role Ray has taken on with the Red Cross locally is representing the organization in Emergency Operations Centers both before and during disasters. In this position he serves as a liaison between the Red Cross and local emergency management officials, communicating requests and information to Red Cross teams to ensure needs on the ground are being met.

He has also served as a caseworker. While working in this role during Hurricane Irene in 2011, he received an inquiry from an individual in Iowa who could not reach two of his older relatives in Long Island who had evacuated due to the storm. Ray was tasked with helping reconnect them, and he did. Ernstine ultimately found the family members and informed them about their worried relative in Iowa. He even helped connect them by phone.

Enstine now splits his time between New York and South Carolina and volunteers with the Red Cross in both places.

“As you get older, you get removed from things,” Ray says about retired life. “But in the Red Cross, you get to see all these different people and learn about all different cultures and things you don’t know. It’s just been a chance to give back and connect to people, and it’s been quite a ride.”

Posted by nyredcross at 1:48 PM