"Three Questions” is an American Red Cross in Greater New York blog series featuring staff, volunteers, and partners who help carry out our humanitarian mission. Through these short interviews, we hope to shine a light on our different programs and get to know those who make this work possible.
Mitchell Ostrover, a resident of Glen Cove in Nassau County, is a longtime Red Cross volunteer who supports the organization after local disasters as a member of our Disaster Action team and following large-scale emergencies outside our region in multiple capacities. He joined the Red Cross after a long career, first in textiles and then insurance. His path to our organization began after 9/11.
September 11, 2001 has had a lasting effect on us all. Can you tell us how this day became a part of your journey to the Red Cross?

September 11, 2001 was a day I will never forget. Although the attacks occurred years ago, I remember how I felt as if it happened yesterday. I was in complete shock. However, this feeling did not last long because I immediately decided that I did not want to sit on the sidelines. I wanted to play an active role, no matter how small, in helping my country to recover. I called the mayor of my village to find out how I could help police officers and other first responders with their recovery efforts. This led to training that I received in supporting first responders and others impacted by disasters, training that I thought would be helpful in becoming a volunteer with the American Red Cross. I made the decision to join seven or eight years ago and put my skills to good use. It is one of the best decisions I have ever made.

Since joining the Red Cross you have deployed to several large-scale disasters, including most recently, Kentucky. Can you tell us what that was like?

I was watching the news and there was so much devastation caused by the tornados that I felt compelled to help. I made a few calls to find out how I could do so and shortly after I was on a plane. Once we arrived, there was a two-hour drive from the airport to our headquarters in Kentucky. As we began to get closer, I could see nothing but damage everywhere. Homes and towns were torn apart. Building after building was in pieces. Many of my fellow Red Crossers agreed that it was one of the worst disasters they had ever seen. This motivated us to get to work right away. Furthermore, it was the holiday season so we wanted our clients to feel supported in any way that we could. Many could not believe that we flew all the way from New York to help them, and our efforts were greatly appreciated. It is common in Southern hospitality to show love and appreciation through food. We were certainly very well fed. Local restaurants and families prepared meals for Red Cross volunteers for our entire stay, despite their losses.
What are some of your most memorable experiences volunteering for the Red Cross?

One of the great things about the Red Cross is that there is something for everyone to do. So many opportunities and experiences are offered to you. Most recently [in Kentucky], I worked in staff relations and helped others to navigate deployment.

Another thing that makes for a memorable experience is where you stay when you are deployed. One of my favorite places so far has been in a tent. I am a tent person.

Although my locations and roles have changed with each deployment, one thing has remained the same, and that is the people who I serve. Our clients are always so grateful that we are there to help. In the past, before the pandemic, there was never a lack of hugs. Today, there is not so much hugging, but joy and appreciation is expressed in different ways. I remember once our team went to a store to purchase a few items, and everyone allowed us to go the front of the line. It was their way of saying thank you. 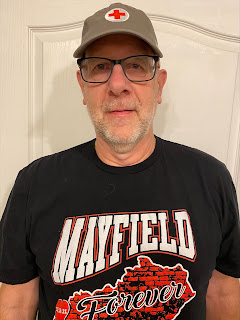 Posted by nyredcross at 9:12 AM