"Sincere thanks … makes every 14-plus hour day worthwhile." 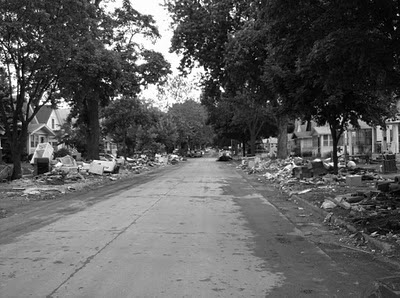 After storms and heavy rainfall caused serious flash flooding in already saturated areas of the central US in June, 2008 the American Red Cross mobilized relief workers to six states in the devastated areas. Greater New York Red Cross volunteer, Fred Leahy was deployed to Cedar Rapids, Iowa where the Red Cross was providing for the immediate needs of those affected by the flood, including food and shelter. Fred worked for three weeks as Deputy Administrator Partner Services, managing the Government Liaison Managers responsible for coordinating the Red Cross response in each Iowa county that was declared a “disaster county,” as well as the cities therein.

Fred, who lived in nearby Waverly as a child, remembers the raging Cedar River as a placid river on which he and his Dad fished when he was five years old. He snapped the accompanying photo above on a side street not far from downtown. “I remember the empathy that I felt when I saw these people's lives piled on the curbs to be carted away as trash,” he said.

“What makes a 14-plus hour day worth while for me comes at the end of the day. On my way to the shelter, bone tired, I will stop for food. Almost every time, while standing in line waiting for a cashier, someone will ask where I am from. After replying “New York City,” they sincerely thank me for coming and helping them. I am ready to go again the next day.”

Email ThisBlogThis!Share to TwitterShare to FacebookShare to Pinterest
Labels: Across the Country