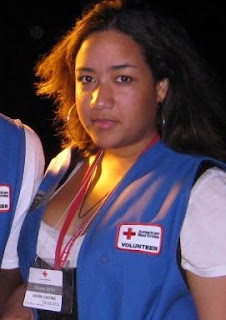 As soon as Sherri Casting heard about the earthquake in Haiti, she wanted to volunteer immediately. She learned via a friend’s Facebook page that the Red Cross needed translators. A few phone calls later Sherri was enrolled in a special volunteer program for Creole speakers who would serve as translators for Haitian patients being treated by Navy doctors on the 1,000-bed hospital ship, Comfort.

After a one-day training course Sherri flew from Florida to Guantanamo, then to Port-au-Prince by cargo plane and from there by helicopter to the hospital ship located off the coast of the Haitian capital for a 30-day stint as a translator. “As soon as we got on the ship and saw the patients, we knew we couldn’t just sit around and translate. We became mothers, brothers, sisters, counselors to the patients. We wanted to be part of their rehabilitation,” Sherri reported.

On the Comfort, Sherri worked in a limited-care ward where the patients weren’t so critically injured. She says that she mostly listened, prayed and talked with them. One patient Sherri especially remembers was a young 19-year-old boy, an artist, whose name was “Lucky Star.” He had been at home on the day of the earthquake because he wasn’t feeling well. He was lying in bed when the ceiling fell on him, breaking his pelvis and tearing his bladder. Lucky Star impressed Sherri, because even after all he’d been through, he was so positive. She told herself, “I can’t let myself be down when here’s this fellow with nothing and he’s always smiling.”

Sherri Casting, 25, was born in Brooklyn but raised in Pétionville, Haiti, until the age of 17. Now a full-time student majoring in forensic psychology at John Jay College, Sherri last visited the country in 2005. Her relatives in Haiti, riding in a car far from Port-au-Prince, felt the severe shaking of the earthquake, but suffered no harm. The school Sherri attended in Port-au-Prince was destroyed by the earthquake.
Posted by nyredcross at 12:27 PM

Email ThisBlogThis!Share to TwitterShare to FacebookShare to Pinterest
Labels: Around the World, Down the Street, Haiti