“We called him John Doe.” 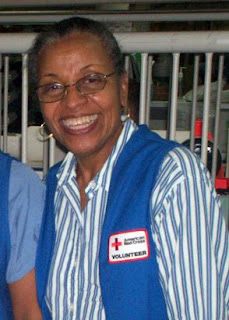 Marie-Ange Tribié was not a Red Cross volunteer before the earthquake in Haiti. But when she learned from her nephew-in-law in Miami that the Red Cross was recruiting volunteer translators to go to Haiti, she signed on immediately.

She trained for a day at Chapter headquarters in Manhattan and was on her way two days later. Before leaving, Marie-Ange presciently said, “Translation is the assignment, but we know before going that we’ll be doing more. They need our comfort, our empathy. That’s where the human touch comes in. That is going to make a big difference in these people’s lives.”

On the Navy hospital ship Comfort Marie-Ange worked in a 58-bed ward filled with sick and injured children. “We called him John Doe,” Marie says of the little boy from a destroyed orphanage in Port-au-Prince who had been dropped off at a hospital in the capital by a motorcycle driver and sent to the ship by an onshore doctor. He was suffering from a skin disease that covered his emaciated body and had invaded his eye, and he was severely traumatized from the earthquake and its chaotic aftermath.

On the ship John drank nothing, and, at first, ate only graham crackers. His legs were like jelly; he would just fall down if one tried to make him stand. He did not speak. He screamed and cried constantly. He was so difficult that for a while he required sedation.

Noticing a few days later that little John Doe seemed responsive to soothing and holding, Marie-Ange volunteered to care for him and spent hours caressing, stroking and speaking to him. Since he couldn’t stand, she just sat and held him. Slowly he began to eat more and, after two weeks, he was eating, walking, jumping up and down, smiling from time to time, even kissing and hugging a stuffed bear. The same John who most of the kids were afraid of when he arrived onboard, became loved and cared for by all.

But John Doe never really talked. He did, however, curse—in Creole. Gently but firmly Marie-Ange weaned him from this habit. One day he went to help himself to the milk he knew was kept in a certain refrigerator. He cursed at the nurse who stopped him. Marie-Ange told him, “No cursing. When you want something, ask for it.” And he took the nurse’s hand and put it on the fridge.

“He was such a success story that everybody on the ship came to see him, even the captain and two visiting admirals,” said Marie-Ange. “But all he really needed was some love.”

Marie-Ange Tribié lives in Wilmington, North Carolina and was in Queens when the earthquake in Haiti occurred. Following her introductory volunteer mission with the Red Cross, she plans to continue as a volunteer and take advantage of Red Cross training courses. Marie-Ange reports that following an operation performed on the hospital ship, John Doe was transferred to an orphanage in Haiti operated by Mission of Hope. She never learned his real name.
Posted by nyredcross at 11:51 AM

Email ThisBlogThis!Share to TwitterShare to FacebookShare to Pinterest
Labels: Across the Country, Around the World, Haiti