“I didn’t know that the Red Cross does so much.” 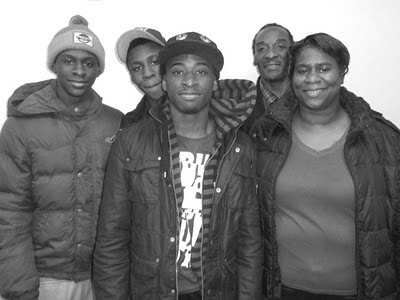 D’André Sibblies (second from left) may never eat chicken nuggets again. D’André, who is 14,and his brother Bryan, 16, (far left), were home alone in Brooklyn early one Tuesday evening. Their mother, Taunya, was returning from her job as a bank teller; their dad, Albert, a freelance computer tech, and older brother Ryan, were out. D’André was hungry and decided to cook up some chicken nuggets.

He filled a frying pan with cooking oil and lit a fire beneath it. Then, Instead of waiting by the stove while the oil heated, D’André used the bathroom, then sat down to watch TV—in a room one floor below the kitchen. Ten minutes later, Rocky, the family’s Australian shepherd, began to bark. D’André thought Rocky had heard someone at the front door—until he smelled smoke, remembered the frying pan and raced upstairs, where foot-high flames were rising from the frying pan.

Panicked, D’André did the exact wrong thing—he threw water on an oil fire. Whoosh! The fire leapt up to the ceiling. D’André yelled for Bryan and they beat a path down the stairs and out the front door.


The Red Cross arrived as firefighters contained the blaze. Sadly, the home was destroyed. Greater New York chapter relief workers provided the Sibblies with funds for replacement food and clothing, as well as emergency housing at a local hotel for two nights. Although the family had friends they might have stayed with, Taunya said they were happy to accept the housing. “You don’t want to impose your tragedy on your friends,” she said. Until their home can be repaired, the Sibblies are staying in an apartment in their housing complex.
“I didn’t know that the Red Cross does so much,” said Albert. “I can’t say enough about how much they helped us. We are very grateful.” D’André, for his part, at least in the near term, has sworn off chicken nuggets.

With your generous support, you help mobilize direct relief and comfort year round, across the country and around the world. You're also a foundation for our readiness work – helping people prevent, prepare for and respond to life's emergencies.
Posted by nyredcross at 3:03 PM