“I’ve never been treated so nicely.” 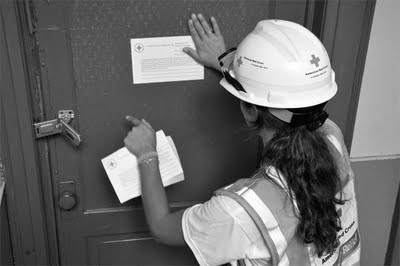 Imagine receiving a phone call informing you that all the possessions you once had were gone, literally thrown out the windows during an apartment fire. For Keisha C., this situation was far from fantasy.

With an unknown spark, a fire broke out in Keisha’s brownstone apartment in Bed-Stuy, Brooklyn while she was not home. It was only when her landlord called her that she received the tragic news. Keisha recalls, “I told him I was on my way, but he said it wasn’t even necessary for me to come because everything was gone. I still wanted to go and see for myself.”

When she arrived around 3AM, nothing was salageable. Soot coated all of her possessions and a large portion of her belongings had been tossed out the window during the fire. It wasn’t until she saw a note left by the Red Cross posted on her apartment door that she had an idea of what to do next. When the Red Cross responds to a disaster and the tenants of affected apartments are not present at the scene, the disaster response team will always post information about support offered by the Red Cross and advises a visit to our chapter in Manhattan. Keisha did not think of calling immediately and had to spend the night in her car. “I think of the Red Cross with Japan or hurricanes, I didn’t think about the Red Cross for this.”

Two days later, Keisha made the trip to our chapter in Manhattan and received the services she needed. After meeting with a case worker, Keisha received emergency housing at a local hotel, assistance with medical needs, help with necessary paperwork and guidance about her next step to get back on her feet. “I’ve never been treated so nicely.”

Keisha C. from Brooklyn
Posted by nyredcross at 11:48 AM

Email ThisBlogThis!Share to TwitterShare to FacebookShare to Pinterest
Labels: Brooklyn, Down the Street