To Love, Honor and Respond to Disasters

Queens residents Jordan Humphrey and Melissa Magnotta are a husband and wife volunteer team who work together, not only as Red Cross Disaster Responders, but also as Public Affairs volunteers.  Last week, we chatted with them about the Red Cross, their Disaster Response work and what it's like volunteering with your spouse. 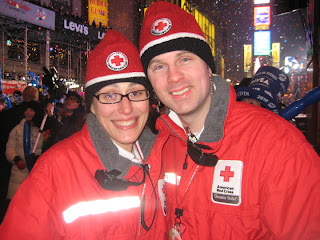 How did you first get involved with the Red Cross?

Jordan: We were volunteering with the organization NY Cares, but we wanted to do something that made a stronger impact and thought that helping people who are victims of disaster would be more fulfilling. Right after our interview we were asked if we wanted to do a ride-along. The day we went out was the same day as President Obama’s inauguration. It was a five-alarm fire. It was so cold and was really intense. Many people were affected and the help we provided was obviously just so vital that we just felt like we couldn’t say no to disaster response.

Can you explain the work of a Disaster Responder?

Jordan: We go out and help people on what is surely one of the worst days of their lives. We help them get through that. We give them a little glimmer of hope that things can be OK. Our job is to show up and make it a little bit easier. So every job is different but the goal is always the same—it’s to try to help somebody who really, really needs it—and people are so appreciative of that.

What is the hardest situation you’ve had to deal with?

Melissa: Each event is demanding, but the most challenging are the ones that occur in the middle of the night, when people are woken up by fires and have to run out with just what they’re wearing. Those people are just in such a state of shock that they don’t know what to do with themselves and they’re really just happy to be alive. So it’s very emotionally demanding.

Jordan: Every disaster has its own challenges. I’d say the hardest thing to do is to walk away at the end. It makes it a little easier to know there is a building full of people at the Red Cross ready to step in where you’re leaving off, but it's still hard not knowing if they will take that extra step to go down there to get all the help they need. That’s the hardest part—having faith that people will take the initiative to get all the help that’s available to them.

What is the most rewarding part of the job?

Melissa: The most rewarding part is helping people, knowing that you are the go-to person for someone who might not have someplace to go if the Red Cross wasn’t there. Some people don’t have any place to go. With this particular volunteer experience you get to see your hard work pay off. You get to see that what you did helped someone.

How do you manage your volunteer work with your full-time job?

Jordan: I don’t. One of the supervisors has a great saying, “Volunteers don’t necessarily have the time, they just have the heart.”
Melissa was just saying earlier that she’s had a really rough week at work and she really needs to respond this weekend. It’s the great equalizer. What is an emergency, really? I have a 24-hour-a-day type of job and I do get work calls at responses. I don’t take them because what’s more important, someone needs a file uploaded or the family who has just lost everything. It’s hard to imagine what everything looks like until you see someone standing there in their pajamas with no shoes on and it’s 17 degrees. They had to run out with nothing, not even a subway card to get to their mother’s house. We help them, and it’s so satisfying, I can’t not do it.

Melissa: You have to think about the people who are out there who are dealing with a disaster and working a job too, and if we weren’t there to help them they would have an even more difficult time so we just make it happen. If we weren’t there they might not be able to cover a shift and I don’t want to think about letting those people down, so I just suck it up and go into work a little tired the next day. I’m a teacher, so calling in isn’t an option.

What qualities would you say are important if someone wanted to be a Disaster Responder?

Jordan: Disaster response is very challenging. I would say someone who can organize his or her thoughts and stay calm under pressure, because on-site everything is a true emergency. Sometimes there are 60 people needing someplace to stay, so where do you start? You just have to start at the beginning and you can’t panic. The other thing is being a really good ear. I don’t talk a lot on calls but I do a lot of listening because people need to express their frustration, their fears. I like to think of it as: I’m everybody’s best friend—a friend who has done this hundreds of times and knows how to help.

Melissa: A disaster responder should be someone with good communication skills and someone who can coordinate events with a calm head, because a lot of people are looking to you in difficult situations and you have to know just what to do.

How long have you guys been married?

Melissa: But we met in high school, so we’ve been together even longer.

What is it like responding to a disaster with your spouse?

Melissa: It’s really interesting because you get to see your spouse in a different light than you would when you’re in a home environment or even a typical work environment. I get to see him in action and see what he’s really good at, and see those special qualities that he has that make him a great responder.

Jordan: I love responding with my wife. It’s fantastic, the non-verbal communication that we have, knowing what each other needs right away with just a look. For example, when we know something is going to be pretty bad and we need more help, like if someone is crying on my shoulder, she’ll know with just a look to page disaster mental health. Or, I’ll know if she glances at me a certain way that the kids really need some extra attention and I’ll come over and keep the kids occupied while she takes care of Mom. I have a real partner who understands me.

Do you have anything else you’d like to add about the Red Cross?

Melissa: The Red Cross really is an amazing organization that does really good things. I would encourage everyone to look into volunteering. Everyone can do something, even if it isn’t disaster response, there is always a way you can put your skills to use to help.

Jordan: Being able to help and give hope at people’s greatest time of need is so powerful. You don’t know how many times I’ve said to someone, “Do you have someplace to stay tonight?” and they’ve said, “Well, yeah, I can sleep in my car,” or “I can stay on the subway tonight.” And it’s incredible to be able to say, “No, we can get you someplace if you need it.” They don’t know—and it’s so important.
Posted by nyredcross at 5:21 PM

Email ThisBlogThis!Share to TwitterShare to FacebookShare to Pinterest
Labels: Volunteer