2 Vacates and a Fire 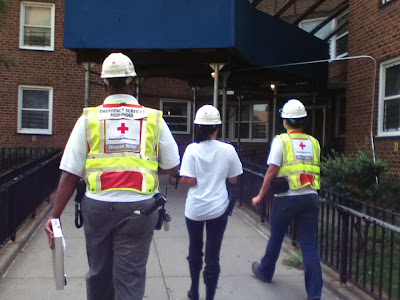 When I started my internship in the Communications Department at the Red Cross in June, I was not quite sure what to expect. On my very first day, I was introduced to the blog that I am posting on now, a blog that highlight’s how the Red Cross changes people’s lives. As I read through each story, I felt a sense of pride knowing that I would be working with an organization that helps people in so many different ways. As I continued to read, I came across a story written by the previous intern who shared her experiences shadowing a Red Cross responder. The next day, I was told that I’d be doing the same thing.

I went my first one of these “ride-alongs” two weeks into my stay and observed our Chapter’s response to two vacates. (A “vacate” is when the city deems an apartment or a building unsafe for habitation and orders the tenants to leave.) But as my time in NYC was coming to an end, I had yet to see what the Red Cross does the most, respond to a fire. I was especially eager to see a fire response, since a large part of my job involved writing stories about these incidents for the Greater NY Red Cross website. Several attempts later and only two days before the end of my internship, that time had finally come. 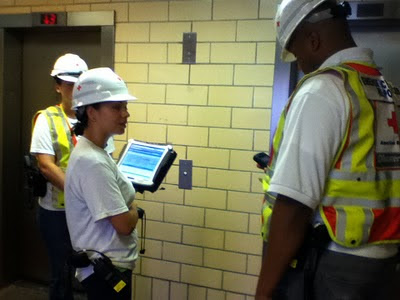 As I arrived at the scene of the fire in the Bronx with the responder I was with, the very first thing I noticed was there was no fire truck and everything seemed calm. As we made our way into the building, there was no sign of a fire. Since we knew it only affected one apartment, we continued to make our way to the 7th floor. As we stepped out of the elevator, the smell of smoke filled the air, the first proof to me that there had definitely been a fire. As we turned the corner to the apartment door where the fire occurred, visible ash was outside of the door. We knocked on the door, there was no answer, but we did notice an extra lock on the door. The lock had been put there so no one could enter the apartment. As the responder prepared the Red Cross letter to leave on the door, a janitor informed us that there was no one home during the fire. Once again, we could only hope that the residents would use the Red Cross number on the notice and call us if they needed anything. 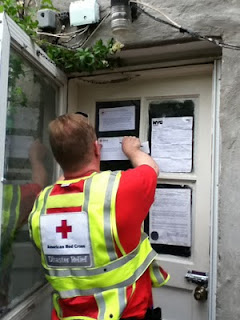 As I think about the residents of the apartment that was affected by the fire. I think about all of the emotions they may go though when they arrive home, when they see the lock on their door and learn that there has been a fire in the place they call home. I can only imagine the heartbreak they will feel. My only hope is that they will feel a glimmer of hope when they see our sign posted on their door and know that the Red Cross is waiting to help them. I hope they reach out to us and I hope they find the strength within themselves to share their story. A story that may in return, change someone else’s life.
Posted by nyredcross at 11:42 AM

Email ThisBlogThis!Share to TwitterShare to FacebookShare to Pinterest
Labels: Disaster Response, Down the Street, Vacate