My Life in Disaster: Contagion! 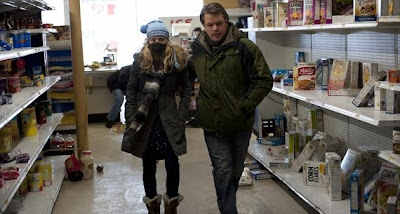 Last week I went to see the movie “Contagion,” directed by Steven Soderburgh. It’s a thriller about an airborne virus which causes a pandemic, killing almost everyone who comes into contact with it. In the movie, Kate Winslet, who plays a doctor investigating the virus for the Centers for Disease Control (CDC), mentions that we touch our hands to our face two or three thousand times per day. Yes, thousand!

After watching Soderburgh’s quiet, cool focus on how often we are exposed/expose others just by passing a credit card to a cashier, or eating from a bowl of peanuts at a bar, I can’t help but be just a bit compulsive about whose germs I have been or am about to be exposed to myself.

Immediately after seeing the film I’ll just say that I was a different person. I became suspicious of every cough, sneeze or throat clearing within earshot and way too aware of how often people touch their faces, then touch things, which we then touch. I understood why people in Japan walk around with face masks.

Now that some time has passed I’m not as panicked as I was right after seeing the movie. I’m less inclined to reach for the sani-gel every time I shake hands with someone. I also remind myself that we have been through recent pandemic scares such as SARS and Anthrax and of course the ever-changing influenza virus.

While movies like “Contagion” are entertaining, they can also make us want to hide in our rooms and not come into contact with any living creature; but we’ve got Facebook and texting for that. What we should do is listen to our mothers. The old adage “Wash your hands before you eat” isn’t for naught.

We can also be a bit prepared. Why not have a face mask for each person in the family? Redcrossstore.org carries a Germ Guard Personal Protection Pack with N95 Mask, which sounds very official, but is really a mask, gloves and hand sanitizer.

I still think we should rethink shaking hands as a form of greeting people. Wikipedia states that handshaking is thought to have originated either as a means of displaying an open palm sans weapon, or as a way of displacing an opponent’s weapon. And since most of us are not gun toters, maybe hugs are a good alternative.

My Life in Disaster is a series of blog posts by Maha Awad, who is volunteering with the Red Cross and finding out first-hand what it means to be prepared for life’s many disasters.

Posted by myLifeinDisaster at 2:43 PM