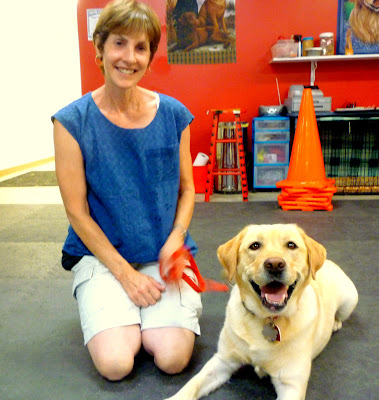 Darla, whose official name is “West Hill Do-Si-Do My Darla,” is an approximately four-year-old yellow Labrador Retriever owned by Susan and Elliot Henson. Darla was bred by Laura Lafreniere in Middlefield, Massachusetts.

Darla is the Henson’s fifth Labrador Retriever. All their Labs prior to Darla were males; goofy, wonderful, strong Labs. They were well trained. They competed in Obedience and Conformation obtaining many ribbons and Obedience Titles. The Hensons were heartbroken after the loss of their fourth Lab, Isaac. For their next dog, they were interested in other breeds but couldn't decide on a different breed so they decided to get a female.

Darla is outgoing and not quite as distracted as her male predecessors so Susan decided to socialize and train Darla as a therapy dog. Darla has also “trained herself” to sit by Susan’s side until a passerby or an acquaintance says, "Oh what a pretty dog!" That’s Darla’s cue to get up and say hello, get a pet or perhaps a treat.

She tries to get away with a “jump up” but Susan thinks they have that pretty much under control except when Darla visits with the Soldiers at West Point on Wednesdays with the Red Cross Pet Therapy Program. Darla is always very happy to see her new friends—dogs and soldiers alike.

The Soldiers are happy to see her as well. They play with her and pet her a lot. Darla loves the Soldiers’ play style (very loose and casual) and is totally exhausted when it’s time to go home.

Susan says the other dog visitation teams they work with are wonderful. Everyone cares about helping the Soldiers.

“This special privilege and opportunity to help our Soldiers makes us feel very special indeed.”

Email ThisBlogThis!Share to TwitterShare to FacebookShare to Pinterest
Labels: Down the Street, pet therapy dogs, Service to the Armed Forces, West Point