"When the Red Cross walked up I knew I could calm down." 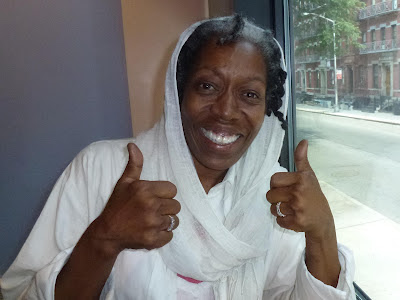 It's impossible to know in advance when disaster will strike—or to appreciate the degree of trauma and chaos victims will face when it does.

To Lew Eleanor McNeely, the scene was terrible when she returned from a Sunday morning outing with her 2½-year old granddaughter Angelina in mid-June to find her 10th floor Manhattan apartment engulfed in flames.

Firefighters were focused on battling the blaze; neighbors were themselves in shock and could not help ease her sense of panic and loss. No one was in a position to tell her what to do next. She had no food or diapers for the baby and almost no cash in her purse to buy more. She looked around the disaster scene and found herself alone.

“When you are in the eye of the storm, you need someone to guide and direct you,” she recalled. “But I felt I was on my own.”

Then two disaster responders from the American Red Cross—Cosmina Menghes and Tiara Youmans— arrived on the scene.


Baby Angelina seemed fascinated by the responders’ Red Cross caps. They let Angelina play with one of the caps, which nicely distracted the infant. The crew began the process of registering Lew Eleanor into the system so Red Cross client services caseworkers could provide longer-term assistance. As they took control of the situation, Lew Eleanor felt her own sense of panic and hysteria drain away.

The Red Cross took care of her immediate needs for money to buy baby supplies by issuing a Client Assistance Card—a debit card that she could put to use almost immediately. The damage to the apartment was so great she could not spend the night there. The Red Cross provided her with emergency housing in a clean, safe lodging.

She visited the Red Cross offices in Manhattan and talked to a Red Cross representative about her longer-term needs. Luckily, the managers of her building were able to find her a new apartment almost at once. It helped that she has grown up in the building and that her father had been the building superintendent for 30 years.

It also helped that Lew Eleanor had been a valued tenant in the building—someone very special with a splendid work history and a lifetime filled with accomplishments. She not only spent 25 years teaching classes in adult literacy, but in the evenings she trained other teachers. Since retiring, she said, “I have tried to do everything on my bucket list."

She learned to swim, gave up smoking and taught herself Spanish. Next on the schedule is to travel to the Caribbean.

So the crisis is past and assistance from the Red Cross helped Lew put her life back together again. But there still are important lessons her experience can teach others.

The first is that disaster can strike anyone at any time. Lew Eleanor had spent a joyous day in the park with Angelina. They played in a playground, rode a carrousel, rolled down a grassy hill.

“It was a great, great day,” she said. “We were heading home, all grimy and grassy and sandy, toward what should have been a nap for Angelina and some feet-up rest time for grandma.”

Instead she found her street clogged with fire engines and her apartment in flames.

The second lesson is to be triply careful you are not doing things that could bring disaster to your door.

The night before the fire she had lighted a prayer candle on Saturday night and assumed it had burned itself out by Sunday morning.

But it looks as though the candle had not extinguished itself and was the apparent source of the fire.

“The prayer candle took the apartment,” she said ruefully. “But we weren’t home when the fire began and the baby was never in any danger. That is the real answer to all my prayers.”