What the Red Cross Means to Me 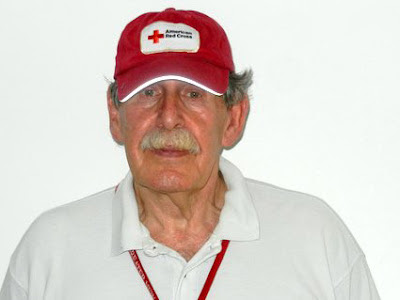 I've been a Disaster Planning and Response volunteer at the Greater New York Red Cross for the past seven years—six as a disaster responder and the past year as a dispatcher in the Emergency Communications Center. But I’ve been running after fire engines a lot longer than that.

My dad was a newspaperman in Chicago, who couldn’t resist racing to the scene of a hot story. The radio in every car he owned was modified to receive police and fire calls. More than once as a child, I remember being awakened by my dad in the middle of the night and told, “There's a great fire, let's go.”

“Howard, the boy needs his sleep,” my mom would say. “Nonsense,” my dad would answer, and off we would go, driving through the dark toward an orange glow in the sky.

My father knew the men at the local fire house and I spent many Sunday mornings there—dad chatting with the firefighters and me climbing over the apparatus. My favorite perch was the tiller seat—the secondary steering wheel at the back of a hook-and-ladder, used to steer the rig around tight corners.

Chasing Fire Engines for a Living

My first job was as a police reporter on a Chicago newspaper, covering crime and fires. Ever hear of a fire burning 14 days? This one was in a refrigerated warehouse, with cork-insulated walls a foot thick. Day-after-day the fire burned through the cork, one floor after another collapsing until the whole building was a mountain of ruble. I stopped off each morning on my way to work, looking for fresh angles to the story.

The worst fire I ever covered came on the day in 1958 I formally presented an engagement ring to my then-fiancé (now my wife of 53 years). I gave her the ring, put her on a train back to college and went off to cover the Our Lady of Angels fire. The fire had burned through a parochial school on Chicago's West Side, killing 92 children and three nuns. More than a half-century later, the awful images of that day remain vivid in my mind.

My career in journalism went off in a different direction—from reporting on crime and disaster to covering business and global finance I spent 20 years as a writer and editor on Business Week magazine and 13 years as network business correspondent on television and radio for ABC News.

My First Tries at Volunteering

I retired from ABC in 1994 to start my own consulting business. Over the years I got involved in various volunteer activities. For example, I was one of five members of a committee created to bring the mission and message of a big national charity into the 21st century.

All my volunteer work seemed to involve endless meetings that led to reports and recommendations that ultimately never seemed to lead anywhere at all. I spent a lot of time and effort, but never saw anyone receiving any direct benefit from my work.

Volunteering With a Difference

Hurricane Katrina jolted me awake as it did many people. I went to the old Red Cross building on Amsterdam Avenue in Manhattan and signed up for training as a disaster responder. And that opened the door to what for me has been “volunteering with a difference.” I have attended few meetings, written no reports at all. What I have had is countless opportunities to provide direct, face-to-face help to people whose need for help is critical.

Actually my first major response in 2006 is still one of my most memorable—a four-alarm apartment house fire in Queens that left 65 people homeless in 17 non-habitable apartments. It was my third training shift and only the second for Melody, my fellow responder in training. Red Cross supervisors Danny Reyes and Jean Sylla raced upstairs to start the disaster assessments. Melody and I found the only lighted dry spot in the building—the basement laundry room—and started registering clients for Red Cross assistance. We wound up transporting two busloads of clients to a nearby motel.

So what are the high points of seven years as a Red Cross volunteer?

It has been exciting. There’s no telling when a shift begins, what will happen. You might spend the shift at the chapter, never going out. Or you might spend a frantic night, going from one incident to the next. After one very busy night, another responder and I were having a pre-dawn meal in a fast food place in Queens—a late dinner or an early breakfast, we never decided.

Our clothes were damp and smeared with soot. We both gave off a decidedly pungent smell of smoke. The other responder looked at me and said he doubted that anyone else in New York City had spent the evening quite as we had. Not since my days as a working journalist have I experienced the adrenalin rush that some of my Red Cross responses have given me.

I think New York is the greatest city in the world and being a Red Cross volunteer has given me an active and fulfilling role to play in the life of my city. As volunteers we become part of New York in a way few people ever experience. Eight million people live in New York, and we are among those who make a difference.

The Satisfaction of Giving Back

I had a great career. At any given time, fewer than 200 people are correspondents for one of the big broadcast networks. For 13 years, I was one of them. I would like to think my talent accounted for that. The truth is I was blessed with great gobs of sheer good luck—being in the right place at the right time. I caught plenty of lucky breaks and now it’s time to give something to those who aren't as lucky as I was.

And that is the ultimate reward for being a Red Cross volunteer—meeting someone who has just gone through the worst experience of their lives and being able to help. We often get tired and wet and filthy on the job. Sometimes we have to take risks to do a damage assessment. In the end, being the first to offer help to someone who desperately needs help makes it all more than worthwhile.