Looking Back at Sandy, Through the Eyes of a Child 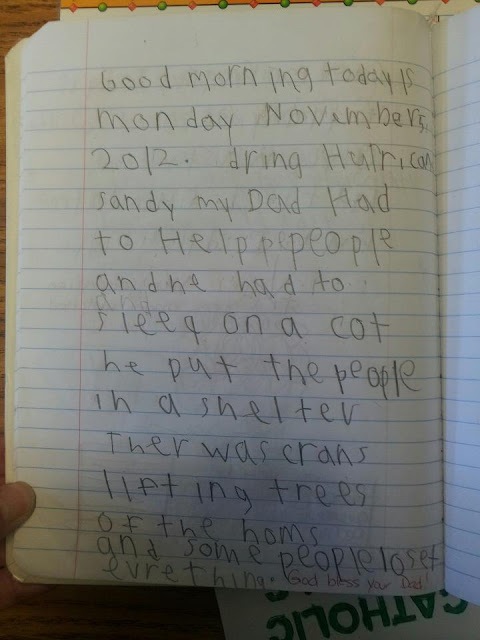 Days ago, I started thinking about writing this; however, I wasn’t really sure what path to take. I could write about the millions of meals the American Red Cross has and continues to serve.

I could talk about the great pride I felt earlier this month when Denise Paulette, from Rockaway Beach, not only thanked us for her meals but said, “It is the Red Cross that is still here.”

And then there is the elephant in the room—the criticism that often comes following disasters—sometimes valid, more often from armchair quarterbacks.

Maybe a comparison between Sandy and the numerous other disasters I’ve witnessed as a Red Crosser for the past six years? I can tell you this, it’s much harder when it’s in your own backyard—and your backyard is the most densely populated region of the country.

The answer to my dilemma finally hit me yesterday in, of all places, a second grade classroom.

My children’s school was holding an open house. I tend to hate these types of events. I mean, c’mon, how many times do I have to look at over-glittered projects and such in the hallways and on the bulletin boards?

After entering my son’s classroom, my wife quickly engaged in conversation with other parents to which I quickly zoned out. I‘m pretty good at the faux-interest head nod. Then I found a distraction—my son’s journal.

Each day, he and his classmates start their days with a few sentences. As I thumbed through it, the thoughts and interests expressed were those to be expected from a 7-year-old boy.

Also not surprising, there was a gap from Oct. 26 through Nov. 5. Due to power outages on Long Island, the school had been closed. Even when the school reopened, many students were still in the dark at home.

My son’s first, post-Sandy entry left a lump in my throat. He had written the following (spelling errors corrected by Dad):


“During Hurricane Sandy my Dad had to help people and he had to sleep on a cot. He put the people in a shelter. There were cranes lifting trees off the homes and some people lost everything.”

Not only was I touched that he thought of me, yet he understood why the help was needed—he was thinking of others and the immediate effects of the storm.

As hard as the past few months have been, I was quickly reminded of what mattered most—all thanks to a bright-eyed 2nd grader.

Granted, the next few months will be equally challenging. Survivors of Superstorm Sandy have a long road ahead of them, as recovery is not a sprint—rather it is a marathon.

Yet at the end of each day, if I can honestly look my children in their eyes and tell them that the Red Cross is doing the best that it can, then I know we are on the right path.