Patrick was our hero. 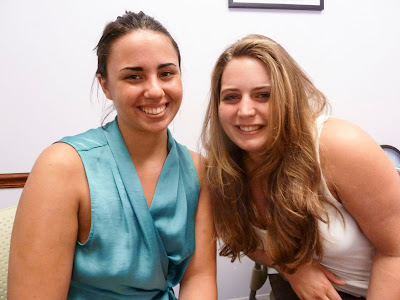 Jaimie Sanita and Emily Viemeister were awakened around 4 am on a steamy night in July by frantic knocking by a neighbor: there was a fire in their building. They rushed down from the sixth floor and watched from across the street as their apartment and two others were consumed by flames.

The two best friends and former NYU college roommates had no idea what to do and where to go next. Then, a Red Cross disaster responder arrived as the fire was extinguished.

“We met Patrick, and he was our savior,” Jaimie said. “He went above and beyond. He made the situation bearable.”

“Patrick was amazing,” Emily agreed. “He gave us cold water and made sure everyone on the street had cold water. He did all the paperwork. He gave us a debit card for food.”

“It looked like a war zone,” Jaimie said. You could see straight to the sky when you looked up.”

Although Jaimie, a banker, and Emily, who works in PR, declined an offer of short-term Red Cross arranged housing and have been staying with friends, they are grateful for everything the Red Cross—and in particular Patrick, has done for them.

“You could tell he cared and wanted to make the situation a little better. He was our hero,” Emily said. She added about the Red Cross, “Keep doing what you’re doing. It makes a difference.”
Posted by nyredcross at 4:32 PM