"The responders really helped with a smile.” 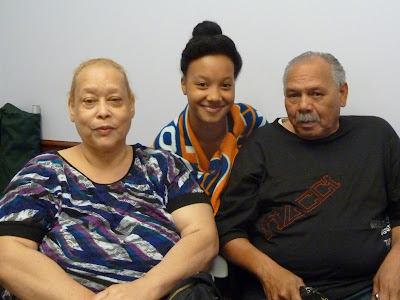 Alicia Rios, her husband, Miguel Ortiz, and their two daughters, Diana Rios, 16 and Felicia Rios, 14, were recently burned out of their Bronx apartment. They were grateful the Red Cross was there to help.

The night of the fire, the family members were all asleep. Feeling unusually warm, Miguel awoke around 1 am. He told Alicia he thought he smelled bread toasting; to her it smelled more like fire.

Miguel went upstairs and found smoke coming through the apartment door above. The family ran outside to safety—just before their living room ceiling collapsed in smoke and flame.
“It was a miracle we got out, but it was so sad,” said Alicia. “Even though we did not get hurt, we saw pictures of our family go down with the fire. We lost everything.”

They had moved into the apartment only a month earlier.

Red Cross disaster responders met with the family at the scene. After making sure that Alicia, who has a heart condition, was not in need of medical assistance, they arranged for temporary housing for the family at a hotel, and drove them there.


Alicia, Miguel and the girls came to Red Cross headquarters days later, where they received financial assistance for food assistance and referrals for long term housing.

"The Red Cross came and they were so friendly and supportive,” said Alicia. "The responders really helped with a smile. They helped a lot and are still helping."
Posted by nyredcross at 3:31 PM