“I appreciate everything Red Cross has done for us.” 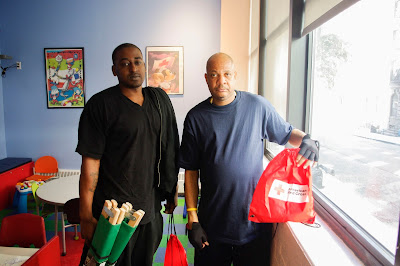 Ronald Bethea of the Bronx awoke one morning to a dark apartment. Thinking his lights might not be working, he went to check on the breakers. That’s when he noticed a nightmarish heat coming from his son John Faison’s room—it was an electrical fire.

Ronald recalled, “I ran out of the apartment. Smoke was everywhere. It was black; I couldn’t even see my hand. I ran out the front door into the hallway. I’m thinking, ‘I’ve got to call somebody.’”

A neighbor saw Ronald and offered assistance, but didn’t have a phone. In a panic, Ronald ran back into his bedroom and snatched up his cell phone. After making it safely outside, he dialed 911 and waited for assistance. First responders arrived on the scene within 10 minutes, as did the Red Cross.

As EMS workers aided the wheezing Ronald, who suffers from asthma, Red Cross responders spoke to his family members who had rushed to the scene. Ronald called John, who works in the music industry, and thankfully was not home at the time of the fire.

The Red Crossers then talked with Ronald. He and John were offered temporary housing and access to emergency funds, but declined the housing, as they were able to stay with one of Ronald’s sisters.
Nevertheless, a volunteer gave them contact information for the Red Cross.

When Ronald and John came to Red Cross headquarters in Manhattan, their first concern was housing.

Ronald worried, “We have no other place to go. We’re not homeless, but [at the same time], we are.” A Red Cross caseworker assisted the pair in their search with a referral to the NYC Department of Housing Preservation and Development (HPD) and emergency funds to cover basic necessities.

“Words can’t say ... more. I appreciate everything Red Cross has done for us,” Ronald said. “They were on point from the time we walked through the door.”
Posted by nyredcross at 4:17 PM