“The Red Cross was there to help me and I really appreciate it.” 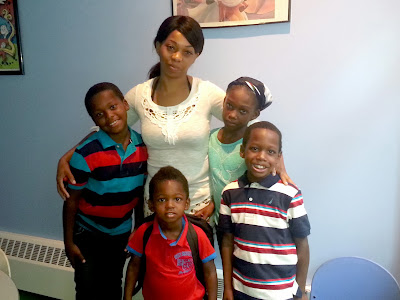 For Kaydian Grennan of Far Rockaway, it was a typical morning at her uncle’s two-story house. She and her four young children were enjoying their usual routine of breakfast while watching TV. Without warning, the fire alarm went off, and thick smoke started billowing from the stairwell down into the kitchen.

Kaydian grabbed her kids and looked for an escape. She recalled, “I knew I wasn’t cooking. I smelled something burning, like rubber, and saw a dark, dark smoke. We just ran—we only had on pajamas.”

When the Grennan family had made it safely outside, they used a neighbor’s phone to dial 911. First responders came to put out the fire, which was caused by the air conditioning unit in the house. Unfortunately, the house was destroyed.

Kaydian was worried. Her uncle and cousin were her only family. She thought, “What am I going to do? I have no clothes, nowhere to go.”

Then, within the hour, the Red Cross arrived on the scene. After speaking with Kaydian, they provided her and her family with a two-night stay at a local hotel and emergency funds for food and clothing.

Having been affected by Hurricane Sandy last year, with no light or power for weeks, Kaydian was especially distraught at the loss of her home. However, having the support of the Red Cross gave her extra reassurance.

Kaydian said, “You don’t know how [relieved] I felt when the Red Cross responder told me, ‘I will place you in a hotel,’ and gave me that card. “The Red Cross was there to help me and I really appreciate it,” Kaydian said. “My kids and I slept comfortably last night.”
Posted by nyredcross at 4:36 PM

Email ThisBlogThis!Share to TwitterShare to FacebookShare to Pinterest
Labels: Down the Street, Far Rockaways, Fire, Queens