Upholding the Rules of War in NYC

Every day we are confronted with images of war—on television, online, in movies, even in videogames. With news of refugees crossing borders and ambulances under attack, the recent crisis in Syria has brought added attention to armed conflict and the consequences it can have on millions of civilians. These tragic events remind us that even war should have limits.

This is why understanding International Humanitarian Law (IHL)—guidelines that seek to protect civilians and regulate the methods of warfare—is so critical.

The Red Cross was founded on these ideals more than 150 years ago and today in New York City they are actively promoted by two Red Cross offices. The American Red Cross in Greater New York does so locally, while the International Committee of the Red Cross (ICRC) at the United Nations defends them on a global stage.

Horrified by the sight of thousands of wounded soldiers lying helpless and abandoned after a huge battle in Solferino, Italy in 1859, Swiss businessman Henri Dunant felt compelled to act. In the years that followed, Dunant set forth a process that led to the creation of “voluntary relief societies that could be trained to care for the wounded in time of war.” These national societies eventually united under the Red Cross symbol.

As the Red Cross network grew, its scope evolved to encompass not only issues of conflict, but also natural disasters, health crises and other humanitarian emergencies.

Although there are several entities that make up the Red Cross (or the Red Cross Movement, as it is also called) today, one branch focuses on situations of conflict: International Committee of the Red Cross (ICRC). Their mission is to provide humanitarian assistance for people affected by conflict and promote laws that protect victims such as civilians and health workers in Syria.

Assisting Families Separated by War and Promoting IHL in NYC

The American Red Cross in Greater New York mainly provides assistance following local disasters. However, as part of the Red Cross Movement, the office does at times deal with issues related to war. When it does, it works through the ICRC.

One such program is Restoring Family Links, which helps reconnect family members who are separated by war. By relying on its staff and partners around the world, the ICRC is able to serve those searching for lost loved ones. Due to this extensive network, for example, the Greater NY Red Cross is able to help New Yorkers like Christine Green—who fled her native Liberia in the mid 1990s—reconnect with family members she did not even know were alive.

“I did not hear from my family in Liberia for 14 years,” says Green. “Thanks to the Red Cross, I was able to reconnect with them.”

Another way the Greater NY Red Cross promotes the ICRC mission is by teaching high school students the basic principles of IHL. The goal of the curriculum is to inspire future humanitarians to understand when conflict intersects with the rights and protections of civilians. Lessons taught during the program also help teenagers contextualize current events they read about.

Seventeen-year-old Johanna Monge from Queens was a student who participated in the IHL curriculum. The class has helped her focus her future career path as well. Monge now aspires to pursue international relations in order to become involved in humanitarian work. She says of the IHL classes, “they really helped me understand the treacherous path that humanitarian aid workers have to go through in order to help the Syrians in need.” 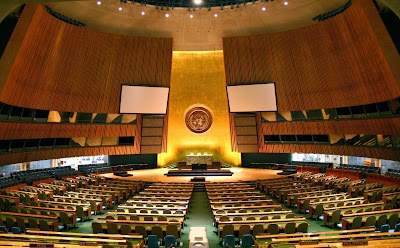 Defending IHL at the UN

While the Greater New York Red Cross promotes ICRC principles locally, less than a mile to the east, the ICRC office at the United Nations does so on a global stage.

The ICRC has held Observer Status at the UN since 1990, which allows it to participate in UN meetings, committees and debates. This includes thematic discussions about the protection of civilians or children in armed conflict, as well as geographic crises like the conflicts in Syria and the Democratic Republic of Congo. There, the ICRC voices its opinion and provides input within its frame of expertise.

“We make sure that ICRC concerns are fed into the UN and shared with member states,” says Walter Fuellemann, head of delegation to the United Nations at the ICRC.

An example of ICRC advocacy is Health Care in Danger, a program launched last year with the intent to raise awareness of the issue of violence against healthcare.

Attacking healthcare workers and facilities and deliberately obstructing the efforts of the wounded to find help are still common features of conflicts throughout the world. While the Red Cross Movement is “rooted in the protection of health care in conflict zones,” as Fuelleman emphasizes, many of those who try to help are injured in the process. The goal of Health Care in Danger is to mobilize action within the international community in order make a difference for those affected on the ground.

So far, the program has seen much success. “We strive to include Health Care in Danger language into resolutions and presidential statements at the level of the Security Council,” says Fuellemann. “We have been able to do so on several occasions.”

Another major opportunity for the organization is at the UN General Assembly (GA). There, the ICRC engages states on the topics of humanitarian action, peacekeeping and humanitarian law. Fuellemann describes the ICRC’s role in the GA as unique, saying, “The GA allows the ICRC to interact in the same place and time with every state in the world, all of which are signatories to the Geneva Conventions.”

Nevertheless, the work of the ICRC at the UN is not limited to advocacy. The ICRC’s presence in nearly every conflict zone around the world allows it to provide real-time updates from the ground, which helps shape UN policy.

In Syria, the ICRC and local partners have been providing humanitarian assistance to millions of people affected by the fighting, but there are considerable challenges.

“The suffering of civilians in Syria has now reached unprecedented levels,” says Fuellemann. “There are acute shortages of food, water and medical supplies in a number of areas that have been sealed off for months and to which the ICRC and the Syrian Arab Red Crescent have not been given access.”

These grave concerns make the ICRC’s efforts here in New York and around the world all the more urgent.

Posted by nyredcross at 3:11 PM

Email ThisBlogThis!Share to TwitterShare to FacebookShare to Pinterest
Labels: Around the World, Down the Street, International Humanitarian Law