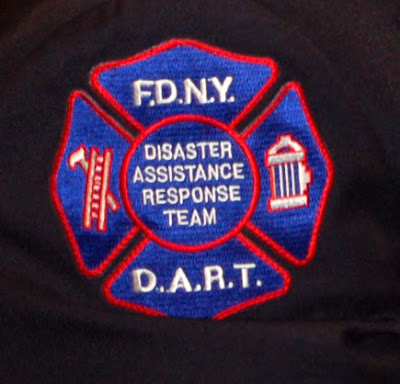 The heroic actions of the firefighters who rushed into the smoke and flames of the World Trade Center on September 11, 2001 are almost legendary. They gave so much, and 343 paid the ultimate price, giving up their lives to save the lives of others. What few people may know is that five of those who perished were members of the Red Cross Disaster Assistance Response Team, or D.A.R.T., a group of firefighters with Red Cross training who donate their time to help others.

D.A.R.T. was formed as a partnership between the FDNY and the American Red Cross in Greater New York in 1989, when 18 active-duty firefighters responded to an urgent Red Cross call for bilingual volunteers to help 90,000 families in Puerto Rico devastated by Hurricane Hugo. The firefighters were trained by Red Cross and then deployed to Puerto Rico with Red Cross.

Since then, disaster responses have taken members of D.A.R.T. to some of the largest, most devastating natural and human-caused calamities of the last two decades. None hit closer to home than the tragic events of September 11th, 2001.

On that day, D.A.R.T. members numbered 110, most of them active-duty firefighters. Many D.A.R.T. members rushed to lower Manhattan with their respective fire companies, running into the smoke and flames to save lives.

Luis Fragoso, the current chair of the organization, and one of the founding members of D.A.R.T., was assigned to RAC-4 on Roosevelt Island on 9/11, where Special Ops is headquartered. Later that morning, he responded to Ground Zero, where he worked on and off until the end of January.

Fragoso remembers calling into the D.A.R.T phone message line and hearing dozens of messages from retired firefighters who were eager to help with the rescue and recovery operation. (Active firefighters, who were on call at their respective firehouses during this period, were unable to respond with D.A.R.T.)

Many of the more than 120 retired FDNY responders who assisted D.A.R.T. during the 9/11 relief effort eventually joined the group.

Mike Mondello was one of those firefighters.

On 9/11 Mondello was home with his grandchildren in Rockland County, watching TV “in shock.” He immediately packed his gear onto his truck and headed to New York City. Finding the bridges closed, he turned back, ending up at a local dock, where he “hitched” a ride with a man willing to take him and three nurses who also needed transportation to Manhattan on a small private boat. “I can’t tell you what made me go to that dock or where this guy came from, but that’s something I’ll cherish my whole life,” Mondello said.

Mondello checked in with a makeshift command center set up at Ground Zero. “This was still in the opening hours. In the chaos, you picked your own assignment.” He worked at the site for about a week. Then he heard that D.A.R.T. was asking for firefighters to help out at the Red Cross Family Assistance Center at Pier 94 where survivors and family members of those who perished received food, beverages and emotional support. Mondello decided this was something he wanted to assist with.

In the six months that followed, D.A.R.T. alternated between search and recovery at Ground Zero and supporting grief-stricken families of victims. Mondello says of helping the families, "We worked 24/7, taking survivors to doctor’s appointments, shopping, wherever they had to go.”

He said it was especially meaningful for D.A.R.T. members to be helping the families of fallen firefighters. “We had a deep personal connection with them and they with us. There was a level of comfort in that they felt that a brother was taking care of a brother.” In fact, Mondello called supporting the families “a life-changing experience.”

Most, if not all, D.A.R.T. members feel the same about their D.A.R.T. service. “Without being involved with DART there would be a void in my life,” said Robert Reeg, a WTC responder who joined D.A.R.T. in 2006. “It gives you a feeling of fulfillment, and I think everybody needs a bit of that.”

Although Reeg was seriously injured on 9/11 by falling debris, he was fortunate to live to tell about his experience. Sadly, one of the five D.A.R.T. members who died was a good friend of Reeg’s, “an all-around warm, caring guy to work with and a committed firefighter.”

Although Mondello didn’t know the five who were lost on 9/11, he said, “They were still my brothers.”

Reeg added that the D.A.R.T members and other firefighters who lost their lives during 9/11, "died doing something they loved. We’re a brotherhood and a sisterhood and we like to give back to the community. We honor their memory by continuing to serve."

Through D.A.R.T. they are able to do just that.

Email ThisBlogThis!Share to TwitterShare to FacebookShare to Pinterest
Labels: D.A.R.T., Down the Street, September 11